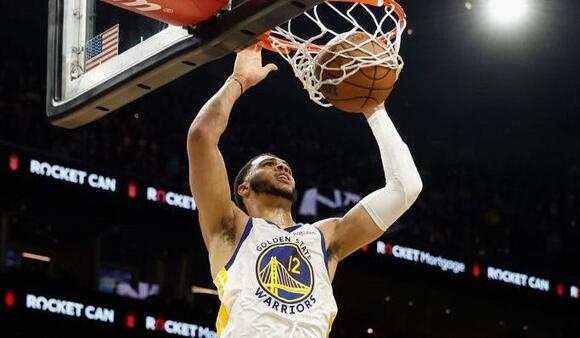 The Santa Cruz to Golden State pipeline is still pumping out NBA players at an annual rate.

Quinndary Weatherspoon became the latest Warriors player to get the call up from the Sea Dubs, as he made his Golden State debut on Christmas Day against the Phoenix Suns. For December basketball, it’s about the biggest stage you can be on, and the G League call-up didn’t flinch.

Throughout the years, players like Jordan Poole, Juan Toscano-Anderson, Damion Lee, Patrick McCaw, Quinn Cook, Damian Jones, Kevon Looney and Kent Bazemore have found their footing in Santa Cruz before getting their call up to the Association. Santa Cruz Warriors play-by-plan Kevin Danna has got an up close look at these players – along with recent rehab additions like Klay Thompson and James Wiseman – during his 10-year tenure with the franchise since its inception.

Here’s a look at what Danna has seen from Weatherspoon and a couple of other call-up candidates playing in Santa Cruz.

The Warriors signed Weatherspoon to a 10-day hardship contract Thursday after Lee joined Poole and Andrew Wiggins in the NBA’s health and safety protocols.

The 6-foot-3 guard made a defensive impact in his 14 minutes while guarding Phoenix’s talented backcourt combo of Chris Paul and Devin Booker, though he committed four fouls. Weatherspoon went 3-of-3 from the floor with a rebound, a steal and a block.

Weatherspoon said he sharpened up by guarding Klay Thompson in recent weeks while the rehabbing superstar was in Santa Cruz. In nine games with Santa Cruz this year, he averaged 16.1, 4.3 rebounds and 3.7 assists per game while shooting 44.2 percent from the floor.

“The thing with Quinndary, you watch him and there isn’t one thing that’s going to jump out at you,” Danna said. “He’s not like an incredible 3-point shooter, he’s not an incredible athlete, but he’s just solid at everything. He has a 6’9” wingspan, so that makes him a pretty viable defender.”

Weatherspoon also showed off his basketball IQ on this smart cut that led to an easy bucket:

“Quinndary’s a pretty smart dude,” Danna said. “It looked like a pretty seamless transition for him. He had scrimmaged against Klay for so long, so he’s used to playing guys of that caliber. At some level, he's been in the NBA before, so this wasn’t his first rodeo. All that certainly helps Quinndary.”

Weatherspoon only has three games left before his current 10-day contract expires, so he has a limited window to prove his worth at the NBA level. The Warriors signed Weatherspoon to an Exhibit 10 contract this season that didn’t include a training camp invite, but he worked past an early-season injury and worked his way back into the NBA. Weatherspoon played in 31 games with the Spurs over the previous two seasons after being selected by San Antonio in the second round of the 2019 NBA Draft.

“He knows how to play,” Danna said. “He can knock down an open shot. If he was to carve out a permanent role in the NBA, it’s going to be doing more of what he did against the Phoenix Suns. Kind of like how Juan [Toscano-Anderson] broke into the league. They’re different players, but someone who knows how to move the basketball, the ball doesn’t stick with him, he can make quick decisions on offense and he can guard his position on defense. He’s not nearly as versatile defensively as Juan is, but as you can see he guarded his butt off against Devin Booker and Chris Paul.”

"You've got to be wired different to come into a situation like tonight and just show what you're about," Curry said. "Defensively, he made some amazing plays, just being in the right place at the right time. Drove to the basket a couple times. Got to his spots and finished. He made his presence felt. That's 14 really good minutes, coming out of the G League straight into a Christmas Day game against the Suns. That's a big spot that he showed what he's about."

Without Draymond Green patrolling the paint, and upcoming games against the Denver Nuggets and Utah Jazz this week, I think the time is ripe for the Warriors to bring back Jordan Bell from Santa Cruz. Danna thinks Bell is NBA-ready, too.

“I think he has a chance to get called up,” Danna said. “On either Golden State or another team.”

The tweener big man has put up some solid numbers in nine G League contests this year – averaging 10.8 points, 12.7 rebounds, 3.8 assists and 1.6 blocks per game while shooting 55.1 percent from the field.

“Jordan Bell gets the game of basketball from a Warriors perspective,” Danna said. “He’s an incredible passer. The assist numbers won’t wow you, but he can really tee up dudes. … He rebounds the hell out of the ball, passes it well. Really good team-concept kind of player.”

While Bell’s practice habits and attention to detail were a topic of discussion during his 2017-19 stint with Golden State, when he played in 125 games and helped them win the 2018 title, Danna said the 26-year-old appears to have evolved.

The 29-year-old Axel Toupane has had a winding basketball journey since making his NBA debut in 2016 with the Denver Nuggets. He also spent the 2016-17 season with Milwaukee Bucks and New Orleans Pelicans before spending three years overseas and returning to Milwaukee last season to win a title.

Listed at 6-foot-7, 210 pounds, the French forward is averaging 19 points, 7.8 rebounds and 1.8 steals per game while shooting 44.5 percent from the field. He’s not much of a shooter, as his 28.6 clip from 3-point range will attest, but contributes in other ways.

“He’s much more of an NBA-body class athlete,” Danna said. “He is fantastic with or without the basketball. Great on-ball presence, just knows how to play the game as well.”

Wiggins is set to return Tuesday and Lee could return soon, too, so the Warriors have some reinforcements coming on the wing. But Toupane also appears to be a viable option if Golden State needs to make another promotion.

“I think the thing that holds him back is when his shot doesn’t have much arc on it,” Danna said. “It’s a little inconsistent, but he can knock it down. Great off-ball mover, athletic. When he steps out on the court, he looks like an NBA player.”

The Celtics employee with whom Ime Udoka had an affair helped make all his travel arrangements ... and that job sometimes included organizing travel for his fiancee, Nia Long. Sources connected to the couple and the NBA franchise tell TMZ ... one of the staffer's duties included planning Udoka's team-related travel, and we're told she was also involved in booking travel for Nia to come to Boston or to road games.
BOSTON, MA・1 DAY AGO
The Associated Press

Minus owner Sarver, Suns return for another run at NBA title

PHOENIX (AP) — All-Stars Devin Booker and Chris Paul, along with freshly paid Deandre Ayton and coach Monty Williams, are back together for another run at an elusive NBA title. One man who apparently won’t be along on the journey — team owner Robert Sarver. The Suns met in downtown Phoenix on Monday for media day, less than a week after the embattled Sarver announced his intention to sell the team. Sarver was suspended one year and fined $10 million on Sept. 13 by the NBA over workplace misconduct that included racist speech and hostile behavior toward employees. Sarver’s intention to sell seemed to diffuse tensions on what could have been a very awkward day — and season — for the Suns.
PHOENIX, AZ・18 MINUTES AGO
95.7 The Game

Warriors superstar Steph Curry is about to enter Year 14 of his Hall of Fame NBA career and still looks be in his prime. Klay Thompson thinks Steph can play til he’s 40.
SAN FRANCISCO, CA・54 MINUTES AGO