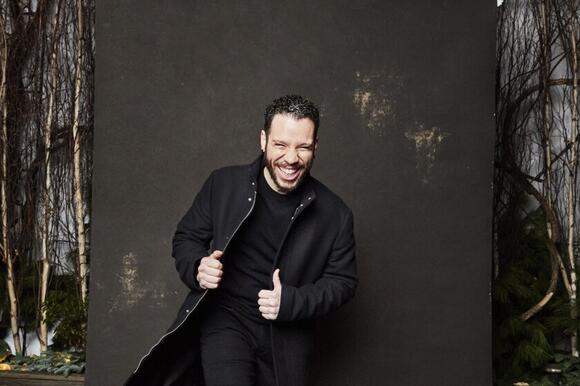 "There was this little snake in the back of my mind who kept whispering, ‘You’re not going to get it. They’ll give the part to some famous singer who wants to act for the first time,’” says actor Robin de Jesús of auditioning for the role of Michael, “Rent” creator Jonathan Larson’s gay best friend, in the movie musical “Tick, Tick … Boom!”

But to his delight, the thoughtful Puerto Rican actor landed the key role in the Netflix film adaptation, bringing him full circle in his work. De Jesús made his feature film debut in the 2003 film “Camp” and went on to star in the 2005 Broadway production of Larson’s “Rent”; he's received three Tony nominations (“In the Heights,” “La Cage aux Folles” and “The Boys in the Band”). Here, he discusses working with first-time director Lin-Manuel Miranda, and the importance of giving voice to underrepresented people and communities in the arts in a conversation with The Envelope:

How did it feel to be working with your friend Lin-Manuel Miranda on his directorial debut on a project that meant so much to both of you?

It was beautiful, but it was more than I ever expected because I knew I have this shorthand with my friend. I knew that I had a front seat. But I was shocked and still so impressed with how in control and comfortable he was as the director and how amazing he was on the fly. But the thing that I'm most grateful for is that I had been in a dark place for a while where my ego was in conflict with my creativity, and I had been spiraling and having panic attacks in the beginning of this film. But I was able to snap my perspective and started to really heal myself. Once I did that, it was like the work really changed, thankfully.

Can you talk about Jonathan Larson’s legacy and what it meant to bring his life back into the spotlight with this movie?

Jonathan is such a giving spirit. He did so much with so many of us. I always give him his love as a white, cis male ally because he wrote these beautiful, meaty characters for Black and brown and queer folks that were messy and complex. But we're still human and you can’t strip them of their dignity and the fact that they were deserving of sympathy, empathy and compassion.

One of the big questions of our movie is what are you doing with your time? These types of questions are good for us to ruminate over. As someone who performed in “Rent,” I can tell you that everyone who has been in that show is part of a tight community. It all keeps bringing me back to Jonathan, and how one man created so much community, and did so much good for those communities, and they are all connected because of him.

You had several physical and emotionally challenging scenes and musical numbers in the movie. Which one was the most difficult to deliver?

Physically, the hardest part was the end of the song “No More.” The dance sequence was a killer because we had to record the choruses at a faster tempo, like three or four times the speed. So you were learning how to lip sync, act and dance at a much faster speed than what people are going to experience in the film. In terms of a dramatic scene, I would say the first scene I did with dialogue, which is the one I have towards the end of the movie with Andrew [Garfield] in the office, which is a really, really intense scene. But the only way that that scene would work is if the scene on the street with Jonathan went a certain way and we didn't get to shoot that scene until the following year because of COVID!

You and Andrew Garfield (who plays Larson) have a great chemistry onscreen. Did you have an instant friendship or spend a lot of time off-camera?

The thing with me and Andrew, first of all, I love that man, and we had the best time when we got together. But there was something about us when we first met, when we just immediately gave each other permission to love one another: It happened instinctually. But it elevated after the second or third day of table reads when it all hit us like how important the friendship was in the screenplay. He worded this better than any of us could. He said, “Wow, I didn't realize it was a love story here too.” It's not a romantic love story, but it is a love story between these two friends. There was something about wording it that way that elevated everything and opened us up to one another.

Can you talk about the importance of playing a gay HIV-positive Puerto Rican man who is living in New York City during the height of the AIDS epidemic?

You know, I'm embarrassed to say this, that it was only recently I was talking to my best friend, Dominic Colon, who's an amazing Puerto Rican playwright-actor from the South Bronx, and we were discussing his play called “War.” He said, “You know, we didn't get to have our elders. Black and brown folks, the women who were HIV, the lesbian death doulas who helped so many gay men die with dignity — they were all omitted from the HIV stories because everyone was just talking about gay white men.”

So, now it feels like a form of reparations to tell HIV stories and put us in there, which actually makes it even more complex. There’s that scene I have with Jonathan on the street. It’s more interesting because of how I identify myself. So, now it’s like I'm not just saying you're treated differently because you're straight and I'm gay. It’s also because I'm a brown person. It just deepens things in a way that I hope more people are brave enough to allow us to do in these stories.

What do you think the ultimate message of the movie is?

It asks the important questions: What are you doing with your time? What are you doing to really enjoy, thrive and contribute to life and be and do your best? I I think of that lyric that Jonathan wrote and Andrew sang it so beautifully. It’s about finding something to love in life so that you go, “What a way to spend the day!” It’s about remembering the importance of the community and who you keep around you and who uplifts you and who doesn’t. Jonathan centered his community, his work and his friends. I think sometimes you're only as good as the people you have around you.

Is there any piece of advice that Lin or Jonathan gave you that has stayed with you?

It's cheesy but it's true: It’s that question of choosing between fear or love. It's a question that I keep checking in with myself, which I mentioned earlier about dealing with the nerves that I had early on when I was choosing fear. It’s called a play, and I wasn’t playing.

What’s next for you? What kind of roles are you looking for now?

I have decided that I'm going to have this conversation out loud more often. I want the majority of my career to be made up of queer work. I want to showcase that you can be a gay actor and play out a wide range of gay characters. Because the question that's posed to queer actors all the time is, “Can you play straight?” And then they say, “If you can't play straight, then you must not be very good.” But the question is never reversed. No one looks at a straight actor and says, “Oh, they must not be talented. They never play gay.” So I want to do just gay-as-f— work and say, “Look at all of this stuff that we can do!”

Celebrities often go into various endeavors besides acting. Their fame can be used as an excellent marketing tool and they usually have the finances to back up their enterprises. Celebrity doesn't always equate to success, however. Take for example Steven Speilberg's themed restaurant Dive!, which didn't survive; or Britney Spears' New York restaurant Nyla, which didn't last long either. Of course, there have been plenty of celebrity success stories as well, such as Hugh Jackman's The Laughing Man Coffee Shop or Ryan Reynold's Aviation Gin. What we don't see that often, though, is a celebrity trying the same style of business again once it has failed.
AUSTIN, TX・1 DAY AGO
Los Angeles Times

Michael Jackson's nephew Jaafar Jackson was cast in the upcoming biopic on the King of Pop. The film is directed by "Training Day" director Antoine Fuqua.
9 HOURS AGO
Showbiz Cheat Sheet

After 'Gunsmoke,' the actor faced health challenges that ultimately killed her. Here's Amanda Blake's cause of death and a possible reason why her friends said she died of throat cancer.
KANSAS STATE・2 DAYS AGO
Herbie J Pilato

He was one of the most popular teen idols in the history of entertainment. As the star of the 1970s hit TV series, The Partridge Family, he rocketed to fame and then died too young.
1 DAY AGO
Los Angeles Times

A 91-year-old drummer meets John Densmore of the Doors, and the music soars

Steve Hideg was never rich, or particularly famous, but music always carried him. He refuses to let go of his drumsticks.
LOS ANGELES, CA・1 DAY AGO
Los Angeles Times

Behati Prinsloo, Adam Levine welcome third baby: But what name did they pick?

After a cheating scandal enveloped Maroon 5 frontman Adam Levine (and referenced his future baby's name), he and wife Behati Prinsloo reportedly had baby No. 3.
9 HOURS AGO
Los Angeles Times

Cindy Williams will be missed by her Hollywood peers, including Michael McKean, Jason Alexander and Rosario Dawson. Here's how they paid tribute social media.
2 HOURS AGO