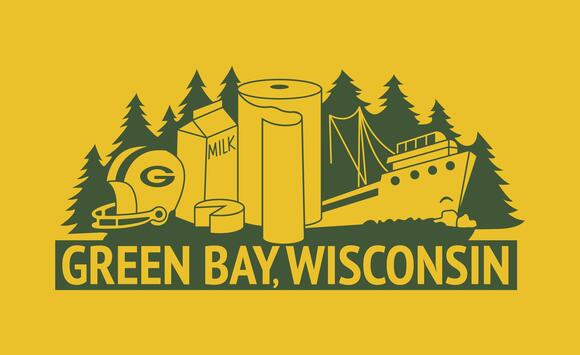 GREEN BAY - When I first saw a photo of the flag, I knew instantly its central image had become lore, a representation of civic pride so enormous it stands above a great ship and the trees of Green Bay.

I'm talking, of course, about the paper towel roll, one of the most familiar and appreciated household goods our great city produces, one that has survived, with gusto, even our most entrenched digital era.

No other municipal flag can be so easily called upon by the search term "paper towel flag" as the city of Green Bay's, but there, in a world of yellow, outlined in Packers green, a paper towel roll waves with sincerest magnificence, as if daring the cloth on which it's printed, "Come, wave with me."

I learned of this flag while in conversation with Steph Hummel, one of the city planners spearheading Green Bay's rebranding initiative. I had wanted to learn about the origins of the current logo, which is potentially meeting the end of its tenure.

Hummel directed me to a website called CRW Flags , which had captured the current seal's evolution since 2004. I later learned the image on today's flag was designed by Adrienne Grun. But below that explanation flashed an image wholly different from the gradient of green, the Bay Beach cupula and the Leo Frigo Memorial Bridge.

The only other former Green Bay flag, according to this site, is the aforementioned yellow flag of lore, described as obsolete and busy. CRW Flags said of it, "I can honestly say this is the first flag I've ever seen to have a roll of paper towels featured so prominently."

Who, pray tell, was the creator of this flag?

Anonymous artwork has been a light in the dark for understanding the vicissitudes of early man. Lascaux Caves, in modern-day southern France, illustrated the allure of bulls, horses, deer and other celebrated ruminant. The Egyptians gave us the Pyramids, a collective of sweat and toil. The Italian Renaissance gave us anonymous devotion to Madonna and child aplenty.

Could such perfection be part of this stupendous canon of anonymity? I had to get to the bottom of it.

RELATED: Green Bay's title of 'toilet paper capital of the world' has a long history

RELATED: Should Green Bay spend $100,000 on a rebranding initiative? Most of the City Council thinks so.

But first, let's make sure we acknowledge the artist behind the current flag:

Adrienne Grun, who died in 2011, is responsible for the flag we know and love ( or question ) today, according to Dave Nennig, who served as chief of staff for former Green Bay Mayors Sam Halloin and Paul Jadin. Nennig said that Grun designed Green Bay tourism brochures for years before designing the current flag, which he described as consistent with the landmarks of the day. 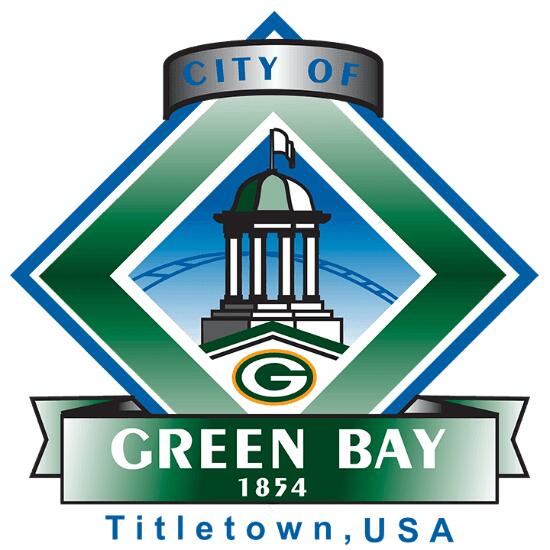 "Years ago, when I worked in the mayor's office, everybody wanted one of our calling cards because it had the Packers helmet," Nennig said, "and we're probably the only local official city that had a football helmet on their calling cards."

Former Mayor Jim Schmitt referred to Grun's flag as a refreshing update from the humble yellow flag, which he described as "too retro."

Schmitt saw the flag as antiquated, and he didn't mince his words when he described its grotesque celebration of industry.

"It looks very dated to me. It just didn't speak of entrepreneurs and it didn't speak of progress. It was very historical. It would look great on a gravestone," Schmitt said. "I just did not like it and I didn't have any desire to go back to that."

But despite his strong — maybe harsh — feelings about the little yellow flag, he couldn't speak of its origins.

Neither could current Mayor Eric Genrich, although he spoke about the yellow cloth more favorably than Schmitt.

"It's a fun representation of what we're known for economically. The paper industry and dairy and shipping represent us, and of course the Green Bay Packers," Genrich said. "I think a lot of people are nostalgic for some of these older logos and flags. It's a fun way to represent the community."

Vexillologists, that is, scholars who engage in the study of flags, consider city flags well designed if they use meaningful symbols and two to three basic colors. A good flag should be so simple in design that a child can draw it from memory.

That's according to Ted Kaye, a flag scholar who has done work with the Portland Flag Association and the North American Vexillological Association.

The "retro" yellow flag might check the right boxes for simplicity.

Stained in my brain are its dizzying symbols of Green Bay's greatest achievements to date: a Green Bay Packers helmet, a carton of milk, a wheel of cheese, a paper towel higher than the trees, and a fishing boat that appears to be shipping out from the great paper roll's generous, towering sheet.

It's green and yellow. Check.

Can I draw it from memory? You bet.

The search for the flag artist

I couldn't be satisfied by the thought that such an artist would languish in time's cruel, unknown past. No, I wanted to grant them the same immortality as their work.

First, I asked Green Bay friends whose parents grew up here. Silence. Maddened, I went to social media, texting out the image on Twitter, Facebook and Instagram. I was so eager, so expectant that someone would come through, that I flipped my phone upside down, as if waiting greedily for a Christmas miracle.

Amaad Rivera, Genrich's chief of staff, was on his way to the airport to celebrate the holidays when I politely forced him to schedule a meeting with the mayor. Genrich could only praise the flag, not identify the artist, but he gave me Nennig's name.

Nennig had served the city of Green Bay since 1981, first as chief of staff and then as a council member. Then, he was narrowly defeated in a mayoral campaign against Schmitt. Genrich and Schmitt agreed if anybody knew, he would.

Perhaps Nennig could hear the desperation in my voice. Perhaps he too shared my appreciation for the yellow flag. Whatever the reason, he told me everything he knew.

About a decade before Nennig served as Halloin's chief of staff, a young woman at West High School designed the flag as part of a citywide contest, he said. I don't need to tell you that she won, but what Nennig said next only imperiled my quest.

"I don't remember her name but she had some illness and passed away," Nennig said. My heart dropped. "I haven't been at West for a while but a trophy case in West High School supposedly had a display about her with the city flag. I bet it's still there."

Intrepid investigative reporter Natalie Eilbert was on the case.

Claire Putman is West High School's library media specialist. She was surprised by my ask, but took it with the sober undertaking of a true archivist. She called on the oldest teachers at West High School and she even walked the hallowed halls of the school searching for the beaming yellow flag.

She called back to regretfully inform me she found nothing on the designer or the flag.

Perhaps, then, East High School housed the brilliance of a young woman who left our cosmic plane too soon.

Julie Ollmann, library media specialist at East High School, took my ask with equal aplomb. She volunteered to look through the school newspaper archives from the 1970s. My heart flitted with hope.

Ollmann searched over 10 volumes worth of 1970s-style school drama and yearning, but found nothing that could give me a sense of this young woman.

I left frantic voice messages for respectable city staffers, whom I normally contact to gain insights into City Council agenda items and arcane policies that affect taxpayer dollars. I began every voice message, "Hi, this is Natalie Eilbert, government watchdog reporter for the Green Bay Press-Gazette. I have an outlandish question for you … "

Terry Sorelle, the mayor's executive secretary, received me with enthusiasm and curiosity. On a tip from Nennig, I asked if she could look through the city's archives in search of the logo that was now exacting on my psyche the same monomaniacal fury as Moby Dick for Captain Ahab.

Need I tell you that her search for the artist was also fruitless?

I submitted this article, my hopes completely dashed, on the eve of Christmas Eve. I gave one last plea to readers to help me put a neat bow in my obsession. I filed the column and shared some laughs with my family, but that I failed this anonymous flag artist tugged at me.

Oh, to be as free as the paper towel roll waving in that bright yellow flag!

But then, a deus ex machina. An email came through from Mary Jane Herber, Brown County Library's local historian and special collections manager, on Dec. 27.

Theresa Devroy. Theresa Devroy was a junior at West High School in May 1973 when the City Council, under former Green Bay Mayor Thomas Atkinson, voted — unanimously, I might add — to adopt her design as the official city flag. Herber read me this information, published in the now-defunct newspaper, The News Chronicle.

The Green Bay Press-Gazette article from Nov. 5, 1973 reported that Devroy's artwork was selected from a pool of either 200 students or 80 students, depending on which newspaper you read. She was 16.

No, what Herber did instead was release me of a terrible burden that would have woken me in cold sweats for an indefinite length.

Devroy died unexpectedly on Nov. 14, 1977, just 21 years old, from sudden complications of an illness. With an associates degree in commercial art (of course), she worked as a tour guide at Heritage Hill State Park and at the Independent Printing Co. in De Pere.

Theresa, I'm sorry you left this mortal coil too soon. Your flag waved magnificently and, years later, it left people aghast, charmed and tickled, what any good art should do. I'm so glad the universe didn't let me throw in the (paper) towel before learning your name.

Update: It has come to my attention that none of Theresa's efforts would have been possible without a motivated middle schooler proposing the flag competition to former mayor Atkinson.

Lori Ann Beirl was a 12-year-old girl at Edison Junior High School when she convinced the mayor, in 1973, to orchestrate a Green Bay school-wide flag design competition.

Beirl, unfortunately, passed away on Friday, at the age of 60.

Most 12-year-old girls are not interested in elevating civic pride, but Beirl's spirited proposal ultimately led to Theresa's perfect yellow flag waving proudly across the city.

Natalie Eilbert is a government watchdog reporter for the Green Bay Press-Gazette. You can reach her at neilbert@gannett.com or view her Twitter profile at @natalie_eilbert .