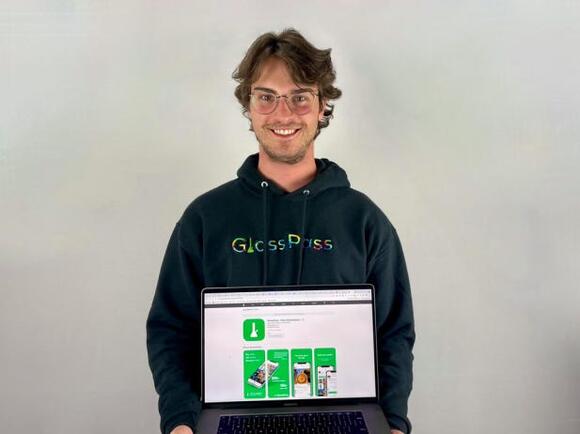 Business: A marketplace for glass-art enthusiasts, which focuses on high-end bongs and pipes.

Backstory: When McDonnell launched GlassPass in 2017, he was still a sophomore at the University of Southern California and wanted to create a place where glass enthusiasts, mostly those creating luxury bongs and pipes, could safely buy, sell, and auction their art.

"Our vision is to be the go-to spot for glass lovers," McDonnell said. "As legalization gets nearer, I believe high-end glass art will become a commonplace collectible item in many homes, similar to fine china or luxury watches."

Wall Street analysts expect the cannabis industry in the US to be worth $100 billion by the end of the decade. Sales topped a record $17 billion last year, and the market is already worth more than $28 billion .

In other words, GlassPass wants to become the Sotheby's of the marijuana marketplace. In 2019, it began selling hoodies and bong mats, and in March, the company launched its official marketplace app, with plans to release more limited-edition drops, create a social-networking community, write editorials, and even host virtual events.

But naturally, the company wants to get into crypto first.

Growth: GlassPass, which takes a percentage of all transactions, processed more than $500,000 in sales and sold about $30,000 in merchandise this year, per documents the company gave Insider.

The company's app has over 20,000 users and has grown nearly 30% month over month since March, McDonnell said, and the company is set to launch cryptocurrency payments by the end of December.

The company has over 30,000 Instagram followers, with high-profile followers in the glass community including Mothership Glass and Sovereignty Glass .

Before GlassPass: McDonnell worked as an associate account executive at Amazon Web Services before leaving in April to focus on GlassPass full time.

Challenges: Each phase of the company has posed different challenges, McDonnell said. For example, he said the company tried to launch a website in 2019 but found it was "buggy, unattractive, and outdated," so he and his team built a mobile app instead. Then, it took six months, in the middle of a pandemic, to find a bank that would process the payments made on the app.

"Throughout all of our challenges, the only constant was our community," he said. "When we faltered, failed, or delayed a release, they never skipped a beat and encouraged us to keep going."

Business advice: "Focus on what you know," McDonnell said. "What you don't know can always be learned later or supplemented."

Business mentor: McDonnell said he typically turned to the GlassPass community for help. He uses Instagram polls, for example, to gauge customer sentiment toward new product features and designs.

Why now is the best time to start a business: It's never been easier to start a business, McDonnell said, especially as access to technology increases. "You can Google anything and find people to build things, without even having to leave your house," he added. "With a passion, a vision, and networking, I believe you can do anything with the tools available at your fingertips."

On hiring: GlassPass, which has about 20 people on staff, is split into two main departments: development and social media. The company hopes to expand and hire more. "Our development team is solid, but we need to expand more on the business side in the future, which we've already started working on," McDonnell said.

On managing burnout: McDonnell does his best to eat well, meditate, and get good sleep. He also tries to make time for activities such as hiking, playing guitar, playing video games, and hanging out with friends. He loves spending time with his dog and tries to keep his thoughts trained on the present. "Don't focus on what you don't have. Focus on what's there," he said. "And don't long for the past."

I agree 100% with this observation. fine glass (especially when taken care of) is a masterpiece. you know, beauty is in the eye of the beholder and what not. Marijuana is a lifestyle and a means of a more environmentally friendly presence here. my opinion.

Google engineer who was laid off while on mental health leave says she 'silently mourned' after receiving her severance email at 2 a.m.

Ali Neil, a Google engineer, said she called a friend, drank some whiskey, and "silently mourned" the layoff until the morning.
2 DAYS AGO
Business Insider

Whole Foods is sick of high prices, too — so it's pulling the Walmart trick of squeezing suppliers to bring prices down

Whole Foods asked its suppliers to help it lower prices as inflation eases at a meeting in December, according to the Wall Street Journal.
2 DAYS AGO
Business Insider

High-income men are cutting their work hours more than their colleagues, while men without college degrees are quitting their jobs entirely.
2 DAYS AGO
Business Insider

Mark Zuckerberg is finally embracing his new role as Meta's Chopper-in-Chief. Here are the plans he just laid out to further cut costs in 2023.

Investors have been calling for months for the social media giant to pull back on spending. The founder and CEO just got on board with the plan.
CALIFORNIA STATE・1 DAY AGO
Business Insider

The billionaire CEO of tech giant Palantir skis for at least 5 hours a week, and has the same body fat percentage as prime Michael Phelps, report says

Alex Karp has been pictured at events in sports gear and sometimes exercises during interviews. He skis, does tai chi, and swims.
CALIFORNIA STATE・17 HOURS AGO
Entrepreneur

Hundreds of online reservations rolled in before the Germany-based carmaker realized the error.
15 HOURS AGO
Business Insider

One family bought a share of some pigs for meat, and saved $500 on groceries, according to the Wall Street Journal.
MICHIGAN STATE・2 DAYS AGO
Business Insider

US car buyers love SUVs and pickup trucks. But if they want to go electric, they'll have to pay for it, at least in the near term.
20 HOURS AGO
Business Insider

Bill Gates said he'd rather fund vaccines to 'save lives' than go to Mars, but he thinks someday Elon Musk will be a 'great philanthropist'

"You can buy measles vaccines and save lives for $1,000 per life," Bill Gates told the BBC, adding Elon Musk has had a positive impact through Tesla.
4 HOURS AGO
Business Insider

Subway's late cofounder will give half the company to a charity where his 2 sons work, amid reports the chain is considering a sale

On Tuesday, Peter Buck's private foundation said that it was receiving Buck's 50% stake in the chain. His two sons work at the foundation.
2 DAYS AGO
Business Insider

So-called hush trips or "workations" are the latest trend blurring the line between work and travel, and causing headaches for employers.
CALIFORNIA STATE・20 HOURS AGO
Business Insider

Netflix's Latin American password-sharing clampdown trial hints at how the upcoming rollout might work, including primary locations and special-access codes for traveling

"If you are traveling or live between different places, you can continue to enjoy Netflix," says the help section for users where it's being trialed.
18 HOURS AGO
Business Insider

A director of engineering at Google said she felt like she was "one kid's tantrum away from losing it," when she found she had been laid off.
MOUNTAIN VIEW, CA・15 HOURS AGO
Business Insider

Reality Labs, the business and research unit of Meta that focuses on the metaverse, reported a loss of $4.28 billion in its most recent quarter.
1 DAY AGO
Business Insider

Amazon's AWS just notched its slowest growth in years. It expects customers to tighten their belts even more.

Amazon execs say the slowdown is due to customers slowing their own spending as they look to reduce all kinds of costs amid the economic downturn.
6 HOURS AGO
Business Insider

Blackstone's real-estate business is totally fine, so please stop asking about it

Blackstone's real-estate business, specifically BREIT, has had a tough few months. But executives would like you to consider the bigger picture.
NEW YORK CITY, NY・17 HOURS AGO