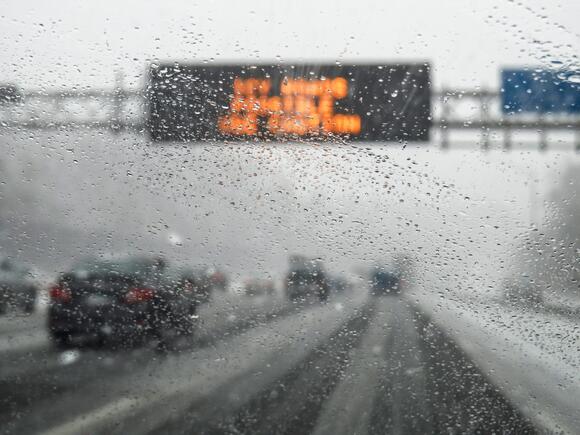 CHESTERFIELD TOWNSHIP (WWJ) -- Slippery conditions may have played a part in a deadly crash in Macomb County on Monday morning.

According officials from the Chesterfield Township Police Department, a 63-year-old man from St. Clair County lost control of his SUV on Gratiot Avenue near 26 Mile Road.

He then crossed over the center line and crashed head-on into another SUV. The man died at the scene.

The 28-year-old woman driving the other SUV, along with her 2-year-old daughter and 14-year-old niece, were all hurt. The three were transported to a local hospital with serious injuries, but are currently in stable condition.

Authorities say the road was covered with snow and slush when the incident occurred, which may have led to the crash.

The investigation by Chesterfield Police is on-going.

I know the 3 injured. They will recover; 2 of them with surgeries and the 2 year old was released already. My condolences to the family of the man who lost his life.

They need to salt better I live off Gratiot a mile before Wadhams I have seen 3 accidents in 2 weeks. Quit being cheap and salt Gratiot BETTER

Driver ejected from vehicle and killed in I-94 crash; passenger taken to hospital

Michigan State Police are investigating a one-vehicle fatal crash along I-94 in Washtenaw County on Monday. The driver was killed and another person in the car was injured.
1 DAY AGO
WWJ News Radio

A 29-year-old man is facing charges after fatally shooting a man in Macomb County over the weekend. Roger Boyd was charged with firearm discharge in or at a building causing death as well as felony firearm.
MACOMB COUNTY, MI・15 HOURS AGO
WWJ News Radio

Detroit police are investigating a shooting on the city’s west side after finding a man’s body. Police say a man was found shot to death on Washburn Street, near the Lodge Freeway and Wyoming, just after 1 a.m. on Tuesday.
DETROIT, MI・17 HOURS AGO
WWJ News Radio

A Detroit man has been arraigned on a pair of felony charges after it’s alleged he drove recklessly, killing a Detroit woman who was on foot.
DETROIT, MI・1 DAY AGO

Police are looking for a man who tried to steal a car that was left running outside an Oakland County gas station. Farmington Hills police said the incident happened just before 1:30 p.m. on Friday when a person left their vehicle unattended.
OAKLAND COUNTY, MI・1 DAY AGO
WWJ News Radio

Police in Washtenaw County are asking for help finding 59-year-old Brenda Sandlin, who has medical issues and left her home Sunday night without her phone and purse.
1 DAY AGO
WWJ News Radio

Two people are in custody after two teenagers were found shot to death near a pond in Oakland County’s White Lake Township over the weekend.
OAKLAND COUNTY, MI・1 DAY AGO
WWJ News Radio

Two people were able to escape safely from an early morning house fire in Macomb County, but unfortunately, their two dogs didn’t have the same luck.
MACOMB COUNTY, MI・17 HOURS AGO

Three people were charged in connection to the homicide of a 35-year-old Detroit woman whose charred body was found wrapped in carpet and with a bag over her head in the trunk of a burning vehicle on May 15.
DETROIT, MI・1 DAY AGO
WWJ News Radio

PNC Bank robbed in Monroe; suspect believed to be responsible for other bank robberies in Southeast Michigan

The search is on for a man believed to have robbed multiple banks in Southeast Michigan, including a PNC Bank in Monroe on Tuesday afternoon.
MONROE, MI・8 HOURS AGO
WWJ News Radio

A Macomb County man was murdered while allegedly responding to a domestic violence incident reported to him by his children. According to Warren Police Commissioner William Dwyer, the 54-year-old man was shot and killed at around 6:30 a.m.
MACOMB COUNTY, MI・1 DAY AGO

State police were not expecting to find a missing girl while conducting a routine traffic stop Friday night, but troopers with the Metro South post were able to reunite a child with her family after pulling over a vehicle in Inkster.
WAYNE COUNTY, MI・3 DAYS AGO
WWJ News Radio

Mother unable to contact son who went missing in Detroit 3 weeks ago, worries about his well-being

Has anyone seen Nikko Staffeld? The Detroit Police Department is asking for tips from the public in the search for a 28-year-old man, who disappeared on the city’s west side on Wednesday, May 4.
DETROIT, MI・18 HOURS AGO
WWJ News Radio

2 teens arrested in Livonia, charged in shooting at graduation ceremony in West Michigan

Two teens arrested in Livonia have been arraigned on weapons charges related to a shooting outside a high school graduation in Grand Rapids.
1 DAY AGO
WWJ News Radio

A fit of road rage ends with a woman’s death in Wayne County. At approximately 6:26 p.m. on Thursday, Garden City Police received calls about two cars that were traveling north on Middlebelt from Cherry Hill at a high rate of a speed.
WAYNE COUNTY, MI・4 DAYS AGO
WWJ News Radio

After news of a school shooting in Uvalde, Texas that left 14 students and a teacher dead on Tuesday, Oakland County Sheriff Mike Bouchard says emotions are still raw after the Oxford tragedy, and officials are bracing for copycat threats.
OAKLAND COUNTY, MI・7 HOURS AGO
WWJ News Radio

Detroit police said they’re looking for suspects involved in an incident that led to shots fired at officers early Saturday morning after authorities pursued a vehicle in Detroit.
3 DAYS AGO
WWJ News Radio

A dispute between a man and his ex-girlfriend ends with a shooting in Macomb County. Warren police told WWJ Newsradio 950’s Mike Campbell that a man went to his ex-girlfriend’s house at 12 Mile Road in Warren, where he vandalized her car.
MACOMB COUNTY, MI・4 DAYS AGO
WWJ News Radio

Michigan State and Detroit police worked together to track down a suspect who led officers on a car chase through the city’s west side Friday morning.
DETROIT, MI・4 DAYS AGO