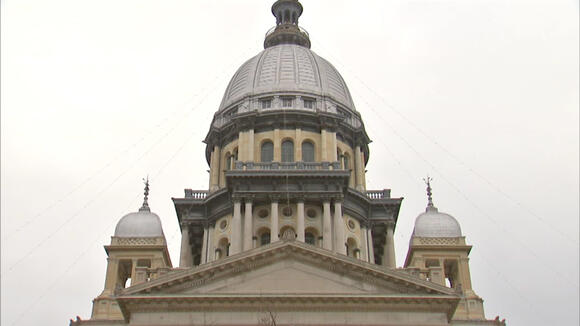 CHICAGO (WLS) -- With the start of the New Year, there is always a new set of laws to obey.

Nearly 300 new laws are set to take effect on January 1, 2022, covering a range of issues big and small that affect Illinoisans.

A complete list of all new Illinois laws taking effect next year can be found here.

Here's a look at some of the most interesting laws set to go into effect.

Illinois is one of the states set to raise their minimum wage to $15 an hour by 2025. In 2022, that means minimum wage will increase to $12 an hour for standard workers and $9.25 an hour for workers under the age of 18 who work less than 650 hours per calendar year.

The new law maintains provisions for employers to count gratuities to offset wages for workers, such as food servers, who regularly earn tips, the department said. Tipped employees may be paid 60% of the hourly minimum wage. However, those workers must still earn the minimum wage after receiving tips, or the employer will make up the difference.

As of Jan. 1, 2020, employers are required to pay workers under the age of 18 the full minimum wage if they work more than 650 hours in a calendar year.

SB 1682 amends the Pharmacy Practice Act and removes limits imposed on consumers looking to find out the retail price of brand name or generic prescription drugs.

Under the revised law, there is no longer a 10 request limit for consumers, and pharmacies are required to post a notice informing customers they can request the price of name brand or generic prescriptions, giving them more options to help cover the cost of medicine.

Two years of living through a pandemic has thrown into sharp relief how important it is to protect one's mental health. Students endure intense stress from tests, homework and extracurricular activities throughout the school year, often compounded by things they're going through at home.

These laws allow for students in Illinois to have up to five excused absences for mental or behavioral health, not just physical illness, to prioritize their mental health.

"Removing that, it gives a kid the opportunity to believe that they're worth what they are. So a student can be judged on their academic merit of what they've done for four years instead of three-and-a-half, four-and-a-half-hour test," said Gregory Dean, a counselor at Michele Clark Magnet High School.

History lessons next year will add some new curriculum to teach students about the contributions of Asian-Americans. Illinois will be the first state to require those materials.

"In order to combat things like the rise in anti-Asian racism and discrimination that we've seen, we need to teach our young people our students the full version of American history, we need to make sure that all students see themselves reflected in the curriculum they're learning," said Grace Pai, executive director of Asian Americans Advancing Justice.

You do you, including your 'do. The Jett Hawkins Act was named for and inspired by a Chicago 4-year-old boy, who faced discrimination for wearing his hair in braids at his preschool.

His mother, Ida Nelson, led the charge to establish a law prohibiting discriminating against natural and ethnic hairstyles including locs, braids, twists and afros, in schools.

Gov. JB Pritzker signed the bill into law in August, at a ceremony attended by Nelson and Hawkins.

"For decades Black people have had too often their natural and protective hairstyles weaponized against them," Pritkzer said at the time.

The law also requires the Illinois State Board of Education to provide schools with educational materials to teach about protective hairstyles.

"I am excited for the children of Illinois to be able to go to school without having to be concerned about their hair," Nelson said at the signing ceremony.

Running a lemonade stand is a rite of passage for many kids. It's a way to learn responsibility, entrepreneurship, and strengthen bonds with the community. And, in Illinois, it was also subject to be regulated and shut down by public health authorities.

Hayli's Law, inspired by and named for 12-year-old Hayli Martinez, whose Kankakee lemonade stand was shut down by local health officials, says that lemonade stands and other stands selling non-alcoholic beverages operated by a person under the age of 16 can no longer be regulated or shut down by public health authorities.

It also prevents authorities from requiring a permit for children to sell lemonade in public parks or on private property.

Juneteenth, the holiday that celebrates the end of slavery in the United States, is officially an Illinois state holiday.

Gov. Pritzker signed the legislation in Springfield three days before this year's Juneteenth celebration, surrounded by members of the Illinois Legislative Black Caucus. To commemorate the abolition of slavery throughout the United States and its territories in 1865, Juneteenth will be recognized as National Freedom Day in Illinois.

Juneteenth is celebrated on June 19.

"Every holiday is a time for us to reflect and this would be a day of reflection, and if you are looking to heal the nation, man, you have to recognize the true history, whether we like it or not," said State Rep. La Shawn Ford, the bill's chief sponsor.

Forty six states had made Juneteenth a paid state holiday. Illinois became the 47th when Pritzker signed the law over the summer.

Standardized testing is only one way to measure academic performance and potential.

In order to increase enrollment among students with diverse socio-economic backgrounds, this new law requires Illinois public universities to make admissions decisions regardless of ACT or SAT test scores.

Students now can choose whether they want to submit a standardized test score when applying to public institutions in the state.

In an effort to support local manufacturers, this Illinois State House bill requires state agencies and institutions to only purchase Illinois and American flags made in the United States.

When a loved one passes, families already have enough to worry about, from funeral services to estates and more. Extra hassle when tying up the loose ends of a life isn't appreciated or needed.

This new Illinois law ends early termination fees on utility contracts for deceased residents to make setting affairs in order that much easier.

If everyone tired of JB Pritzker he's up for reelection November 8 2022 let's once in for all get him out of Illinois an once out never allow him to any position in the state of Illinois not even as dag catcher.

The need to stop letting politicians rules us needs to end. They only are out to line their pockets while taking from the tax payers pockets.

I don't understand the concept of creating new laws when the laws that are already in place have yet to be followed. This is just another way to take money from Illinois residents, and line the pockets of the Democrats in the state of Illinois.

Opioid overdose deaths in Illinois have tripled in the past decade, according to health officials.
CHICAGO, IL・20 HOURS AGO
ABC 7 Chicago

The flu 2022: Some Indiana hospitals restrict visitors over flu rates

During the week of Nov. 20-26, the rate of flu-like illness reported in patients at some Indiana emergency departments was the highest in 10 years.
MARION COUNTY, IN・1 DAY AGO
ABC 7 Chicago

Homes in Black and Latino neighborhoods more likely to be under appraised, data shows

If you're looking to sell your home or refinance, the racial demographics in your neighborhood could impact your appraisal.
COOK COUNTY, IL・4 DAYS AGO
ABC 7 Chicago

A woman who called herself "the Drug Llama" apologized late Friday for selling the fentanyl that killed one of her customers.
ILLINOIS STATE・1 DAY AGO
ABC 7 Chicago

MOORE COUNTY, N.C. -- With no suspects or motive announced, the FBI is joining the investigation into power outages in a North Carolina county believed to have been caused by "intentional" and "targeted" attacks on substations that left around 40,000 customers in the dark Saturday night, prompting a curfew and emergency declaration.
MOORE COUNTY, NC・1 DAY AGO
ABC 7 Chicago

The agency said scammers will swoop in and try to rip off consumers with a variety of winter scams.
ILLINOIS STATE・3 DAYS AGO
ABC 7 Chicago

An Indiana teenager had to be rescued after an avalanche over the weekend in Colorado.
INDIANA STATE・1 DAY AGO
ABC 7 Chicago

A Wisconsin man is charged in the stabbing of a retired couple in their home in Crete.
WILL COUNTY, IL・15 HOURS AGO