Get the latest breaking news, sports, entertainment and obituaries in Middletown, NY from The Times Herald-Record at recordonline.com. 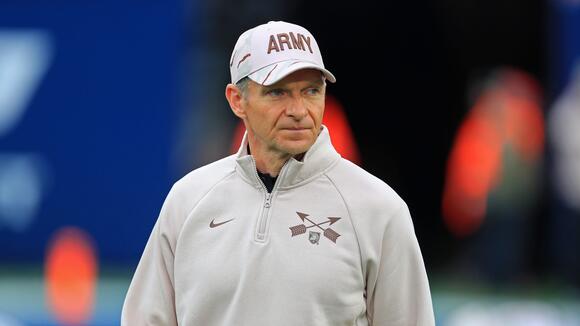 Army’s Jeff Monken was named the football coach of the year by the Eastern College Athletic Conference on Wednesday. In addition, junior linebacker Andre Carter II was named first-team All-ECAC on defense.

The 54-year-old Monken has transformed Army into a perennial bowl team. On Wednesday night in Fort Worth, Texas, Army played Missouri in the Armed Forces Bowl – it is the fifth bowl appearance for the Black Knights in the past six seasons, all on Monken’s watch.

With a win over Missouri, Monken would tie College Football Hall of Fame member Charles Dudley Daly for the second-most coaching wins (58) in Army history, trailing only the legendary Earl Blaik (121 wins).

In 2018, Monken was presented with the George Munger Collegiate Coach of the Year award and the Vince Lombardi College Football Coach of the Year award. The Black Knights went 11-2 that season, beating Air Force, Navy, and topping Houston in the Armed Forces Bowl. Army finished ranked No. 19 in the AP poll and No. 20 in the coaches’ poll.

Carter has enjoyed a breakout season at linebacker. With 14.5 sacks for a loss of 82 yards, Carter leads the nation with sacks per game. He has 29 solo tackles, 12 assists and 16.5 tackles for a combined yards lost of 89 yards. He also has one interception, two pass breakups, three quarterback hurries and four forced fumbles.

On Monday, nose tackle Nolan Cockrill accepted an invitation to play in the Feb. 3 East-West Shrine Bowl, a senior showcase event to be played in Las Vegas (NFL Network). Cockrill has played in 25 consecutive games prior to Wednesday night. He has 39 tackles and two fumble recoveries.

Missouri coach Eliah Drinkwitz decided to play Wednesday's bowl game without running back Tyler Badie in order to keep him healthy for the upcoming NFL workouts and draft. Badie set a school record with 1,604 yards rushing, ranked No. 3 in the country.

Drinkwitz also made a big switch at quarterback, opting for redshirt freshman Brady Cook over Connor Bazelak. Cook will make his first collegiate start. Bazelak started 11 games for the Tigers.

Missouri has been invited to 35 bowl games in its history, though this is only the 34th that the Tigers have actually played. Mizzou was slated to play in the 2020 Music City Bowl but that contest was canceled over COVID concerns. That would have been Drinkwitz's second bowl game as head coach - his 2019 Appalachian State team beat Alabama Birmingham in the New Orleans Bowl. He was 7-0 in bowl games as an assistant coach at North Carolina State at Boise State.

The Army-Missouri game was played after deadline. A game story can be found exclusively at RecordOnline.com/sports, and a bowl follow-up will appear in Sunday’s print editions of The Times Herald-Record.

South Carolina enters a bit of a reprieve over the next few days. The Gamecocks are fresh off a 40-point Thursday night win over South Carolina State and have eight days before heading to Kentucky for a night game. With some downtime, it’s a good chance to look at how...
ORANGEBURG, SC・21 MINUTES AGO
All Cardinals

NFL analysts from across the web make their picks for Arizona's Week 4 road trip to Carolina.
NFL・24 MINUTES AGO

Get the latest breaking news, sports, entertainment and obituaries in Middletown, NY from The Times Herald-Record at recordonline.com.