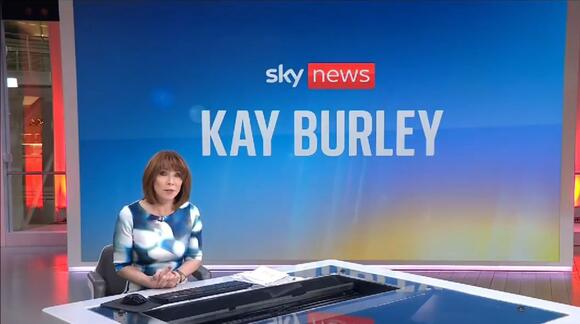 A key component of the daily Westminster and political circus is making one lucky government minister parade around the broadcast media every morning to communicate key government messages and answer questions from journalists.

But today it seems the cabinet put their alarms on snooze as no-one was available to speak to Sky News, leaving Kay Burley in a bit of a lonely pickle.

It came the day after the government left the UK on tenterhooks waiting to see if it would introduce new measures to control the spread of coronavirus over Christmas - ultimately leaving restrictions in the “maybe” pile, and as numerous experts and health organisations advised people to basically put in restrictions themselves.

She said: “After saying they reserve the right to bring in further measures, what impact will that have on our plans for celebrations and holidays?

“The head of the World Health Organisation calling for people to cancel events in order to save lives.

“We were keen to see clarification from the government this morning but there’s no minister available to clear up the confusion for you.”

It is not the first time the government has recently dodged media scrutiny.

After the Downing Street Christmas party allegations started kicking off, Sajid Javid cancelled a media round saying he was upset by the video of Allegra Stratton laughing while discussing how to answer press questions about the alleged event on 18 December 2020, which is said to have taken place while the rest of the country obeyed lockdown rules.

Today, Steve Barclay eventually turned up on LBC and BBC Breakfast where he encouraged people to get their booster jabs and urged the public to make sensible choices when socialising over Christmas, whatever that means.

It’s just a shame Burley wasn’t given the same opportunity to have a good old chat.

Indy100 has contacted Downing Street to see why no-one was sent to Sky News this morning.

The funniest memes and jokes about Liz Truss tanking the economy

Well, it’s not taken her long, but reports are suggesting that Liz Truss is already facing letters of no confidence from Tory MPs.It comes over fears that Truss and Chancellor Kwasi Kwarteng will “crash the economy” following the mini-budget announcement on Friday.Tory MPs, economists and members of the opposition alike have criticised the Prime Minister borrowing-fuelled tax-cutting plans, which led to a disastrous day for the pound and also saw Labour take its biggest poll lead over Tories for more than 20 years.Top economists, currency markets, opposition parties and some Tory MPs have reacted with dismay to the prime minister...
ENTERTAINMENT・23 HOURS AGO
Indy100

Liz Truss has been facing the media for the first time after the disastrous mini-budget was unveiled last week, and it has not gone well. The PM appeared on a number of local BBC radio stations after failing to appear before the media this week, despite the economic turmoil sparked by the announcement last week. She was accused by former Bank of England governor Sir Mark Carney of “undercutting economic institutions” and “working at some cross-purposes” with the bank, after it was forced to make an emergency intervention in the gilt market to prevent a crisis in the UK’s major pension...
TRAFFIC ACCIDENTS・18 HOURS AGO
Indy100

Countdown legend Susie Dent is back once again with another word of the day that perfectly sums up what's going on in the world.The 57-year-old lexicographer is popular in the Twittersphere for her "word of the day" that she has posted for a number of years and the chosen word often reflects the current state of affairs in the UK.Currently, chancellor Kwasi Kwarteng announced a controversial mini-budget last week and this week the UK has seen the pound slump to an all-time low.Sign up to our free Indy100 weekly newsletterMeanwhile, both prime minister Liz Truss and her Treasury ministers have...
CELEBRITIES・2 DAYS AGO
Indy100

A new poll has been published which predicts a comfortable 56-seat majority for Labour at the next general election – and it could be bad news for a number of prominent Tory MPs. Sir Keir Starmer could be set for a comprehensive win against Liz Truss if the numbers come to fruition, according to findings from Savanta ComRes.The poll was released on the first day of the Labour conference in Liverpool. More than 6,000 voters surveyed put Labour a clear 12 points ahead of the Conservatives, on 45 per cent, with Liz Truss’s party on 33 per cent.The research suggests...
ELECTIONS・2 DAYS AGO

Angela Rayner took the opportunity to criticise Liz Truss by using one of the prime minister's most memed quotes against her - and the internet loved the callback.The Labour deputy leader gave a speech at the end of the party's annual conference in Liverpool today (September 28), and didn't mince her words when discussing the new prime minister following the government's controversial mini-Budget, and the financial fallout from the pound falling to an all-time low."From the party of stability to causing earthquakes, from the party of business to the party of to a slap down from the IMF,” she said....
POLITICS・1 DAY AGO
Indy100

The Prime Minister has had a torrid time since taking over earlier this month – but at least there’s one Liz Truss who has been enjoying themselves over recent weeks.If you missed it, a viral star was born after Truss was elected leader of the Conservatives, with many world leaders incorrectly tagging a member of the public when congratulating Truss on her victory. Figures including Sweden’s prime minister Magdalena Andersson inadvertently contacted the wrong account, and accidentally sent messages to Liz Trussell.Trussell, who has the Twitter handle @liztruss, took to it all incredibly well and hilariously responded to Andersson with:...
U.K.・1 DAY AGO
Indy100

The head of ITV was apparently very displeased with Domino's Pizza jumping in on the Holly Willoughby and Phillip Schofield queue-jumping jokes - so much so that they called to complain. Last week, the This Morning hosts were accused of 'queue-jumping' the line to see Queen Elizabeth II after videos of the two circulated online. In response, people created memes about Willoughby and Schofield and poked fun at the situation, including Domino's Pizza.Sign up for our free Indy100 weekly newsletter"Apologies to anyone waiting on their pizza, we've just received an order from Holly and Phil #ThisMorning," Domino's tweeted.While the rest...
RESTAURANTS・2 DAYS AGO
Indy100

22 stunned reactions to the Tories sending the economy into free fall: "This is...bad"

The Bank of England has said it will launch a temporary UK government bond-buying programme as an emergency move to stave off a “material risk to UK financial stability”.The Bank of England said it will intervene in the bond market after a recent sell-off and surge in bond yields.In a statement, the Bank said: “Were dysfunction in this market to continue or worsen, there would be a material risk to UK financial stability.“This would lead to an unwarranted tightening of financing conditions and a reduction of the flow of credit to the real economy.“In line with its financial stability objective,...
ECONOMY・1 DAY AGO

Paul Joseph Watson, a far-right internet personality, appeared to delete a tweet after suggesting airplanes have a 'male' and 'female' bathrooms. In the tweet, Watson sarcastically responded to an article from The Telegraph about the airline Virgin Atlantic allowing flight crew and pilots to choose from the traditional female or male uniform. This means airline crews may express their gender identity regardless of sex. In response, Watson sarcastically wrote, "Pretty bigoted how they're still maintaining 'male' and 'female' toilets on the plane. I want to see the s*** show of 'gender neutral bathrooms' unfold at 30,000 feet."Sign up for our...
AIRPLANE・1 DAY AGO
Indy100

Special stamps to be released in memory of the Queen

Four stamps that feature portraits of the Queen will be released in her memory, the Royal Mail has announced.The new stamps – the first set to be approved by King Charles III – will go on general sale from November 10 and will feature images of the late monarch through the years.A photograph taken by Dorothy Wilding in 1952 to mark the Queen’s accession and coronation will feature on second-class stamps, while the first-class stamp will include a photo taken by Cecil Beaton in 1968 in which the monarch is standing in her admiral’s cloak with her head tilted to...
U.K.・2 DAYS AGO
Indy100

Sir Keir Starmer gave his keynote speech at the Labour conference in Liverpool at a hugely significant moment for the future of the country on Tuesday. The Leader of the Opposition took to the stage at the Arena and Convention Centre at King’s Dock just hours after Labour went ahead of the Conservatives by 17 points in a YouGov poll commissioned by The Times.Labour has an approval rating of 45 per cent while the Tories led by new prime minister Liz Truss trail behind at 28 per cent, the poll suggests. The 17-point lead represents a level of support for...
POLITICS・2 DAYS AGO
Indy100

Liz Truss faced a series of interviews on regional BBC Radio shows on Thursday 29 September as she spoke to the media for the first time since the mini-budget was unveiled last week. Things really didn’t go well for Truss, with the PM facing a series of challenging lines of questioning on the economic turmoil sparked by the announcement last week. Not everyone saw the car crash interviews coming though. Former Newsnight presenter Paul Mason criticised the people overseeing the round of interviews, and compared the local radio presenters to Alan Partridge. Sign up for our free Indy100 weekly newsletter “It's OPERATION ROLLING...
CELEBRITIES・14 HOURS AGO