Which team will get the victory?

Check out these NFL Week 16 picks and predictions for the matchup, which can be seen at 11 a.m. on Fox.

The Buccaneers are an 11.5-point favorite in the game.

Ben Rolfe writes: "An angry Tom Brady and the Buccaneers will march into Carolina looking to put things right after their offense was humiliated at the hands of the Saints. It will be key to see the severity of the injuries to Mike Evans, Chris Godwin, and Leonard Fournette. If those three are absent or limited, Tampa Bay might not look right again. The problem for the Panthers is that you simply cannot trust their offense. This feels like a defensive struggle where the Buccaneers’ stars on that side make the difference. Tampa Bay feels likely to win, but covering nearly two touchdowns with their best weapons injured might be tough."

The site predicts that the Buccaneers will roll to a win over the Panthers in Carolina in Week 16 of the NFL season.

Draft Kings : Buccaneers will cover vs. Panthers in Week 16

Teddy Ricketson writes: "The Panthers' offense is bad and Cam Newton is clearly not the answer. The Buccaneers' defense should have no trouble containing him and the Panthers' defense is not going to be able to slow down the plethora of weapons that the Bucs have. The line swung three points on re-opening, but barring anything crazy happening in the SNF game for the Bucs in Week 15, this one should go their way." 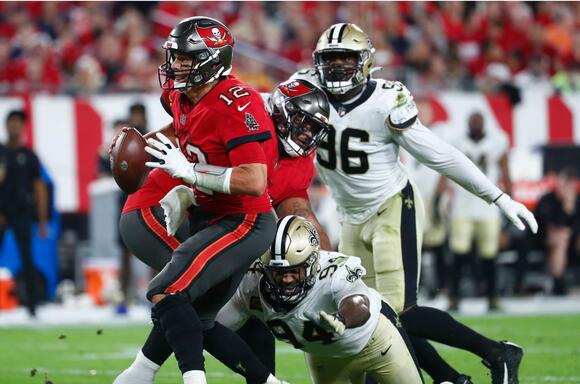 Bradley Smith writes: "The Carolina Panthers (+11.5) will be back in action this Sunday after a very disappointing effort in Week 15 when they fell 31-14 to the Bills in a game they really needed to win to keep their slim playoff hopes alive. Now, the Panthers will face an even bigger test: a home game against the NFC South leading Tampa Bay Buccaneers (-11.5) in Week 16. The lines makers aren’t giving the Panthers much hope in this one (And why should they?), because the Panthers have opened as 14-point underdogs for their Week 16 matchup with the Bucs. The over/under is currently set at 48.5 points."

The site predicts that Tampa Bay will get an easy win over Carolina on the road in their NFL Week 16 matchup.

FiveThirtyEight.com : Buccaneers have a 70% win probability

The site gives the Panthers a 30% win probability in the NFL Week 16 game.

The site's Football Power Index gives the Panthers a 25.3% chance to pick up the victory in the Week 16 NFL game.

When the Cincinnati Bengals take on the Kansas City Chiefs in the AFC title game on Sunday night, they’ll be doing it without three of their starting offensive linemen as La’el Collins, Alex Cappa and Jonah Williams will all be sidelined from the game with injuries. The three...
CINCINNATI, OH・16 HOURS AGO
AZCentral | The Arizona Republic

Former New Orleans Saints coach Sean Payton reportedly spent a lot of time at the Arizona Cardinals' headquarters in Tempe on Thursday, interviewing for the NFL franchise's head coaching position. Could he get it? The current Fox Sports NFL analyst reportedly met with Cardinals owner Michael Bidwill and GM Monti Ossenfort during his visit. ...
TEMPE, AZ・1 DAY AGO
AZCentral | The Arizona Republic

Brock Purdy and the San Francisco 49ers have a huge NFL playoff game on Sunday against the Philadelphia Eagles, with the winner advancing to Super Bowl 57 in Arizona. But before we look ahead to that pivotal NFC Championship Game, let's look back at how Purdy, a rookie quarterback out of Gilbert (Arizona) Perry High and Iowa State, thrust into the spotlight after injuries to Trey Lance and Jimmy Garoppolo, has fared in his first two NFL playoff games.
SAN FRANCISCO, CA・1 DAY AGO