6 takeaways from 'Karen Dalton: In My Own Time,' documentary of the Oklahoma folk singer 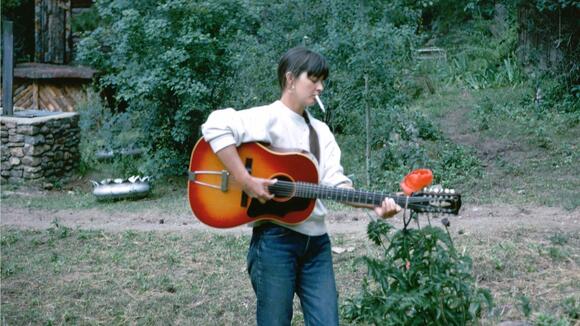 An enigma with an eerie voice, the late Oklahoma folk chanteuse Karen Dalton has emerged as a cult favorite in the past decade.

A contemporary on the 1960s New York folk scene to the likes of Bob Dylan, Tim Hardin and Fred Neil, Dalton's music has turned up in TV shows, movie trailers and YouTube clips, her two albums have been reissued, and her previously unreleased material has been posthumously released. From Lucinda Williams and Adele to Joanna Newsom and fellow Oklahoman St. Vincent, she has garnered a slew of celebrity fans who have cited her as an influence or reinterpreted her work.

Now, the often-overlooked folkie is the subject of a captivating new documentary, "Karen Dalton: In My Own Time," which rightly puts her music in the spotlight while offering a well-rounded portrayal of her complicated, often contradictory personality.

Directors Robert Yapkowitz and Richard Peete spent seven years crafting the film, which is named for Dalton's second album and premiered last fall at the DOC NYC festival. They interviewed her family, friends, fellow musicians, former lovers and fans, amassing an impressive trove of photographs, audio and video recordings and even a few TV appearances and radio interviews that were said not to have existed.

They fill in the considerable blanks left by Dalton's vagabond tendencies with animated sequences, artfully abstracted imagery and text recreations of her poetry and journal entries, which are expressively read by singer-songwriter Angel Olsen.

But even nearly three decades after her death — Dalton died in 1993 at the age of 55 of AIDS, most likely contracted through her drug use — it's her music that still resonates so strongly, from her evocative renditions of traditional tunes like “Green Rocky Road” and "Katie Cruel" to her uniquely spare covers of Hardin's "Reason to Believe" (yes, the one that was a hit for Rod Stewart) and Billie Holiday's "God Bless the Child."

Executive produced by Wim Wenders, the documentary is well-timed, with the label Light in the Attic celebrating her 1971 album "In My Own Time" with a "50th Anniversary Super-Deluxe Edition" due out March 25. Following its streaming debut last month, the film is now available to watch on Apple TV+, Amazon Prime, Vudu and more.

Here are six takeaways from the documentary "Karen Dalton: In My Own Time":

Friend and fellow musician Peter Stampfel notes that Dalton was the only player on New York's famed 1960s Greenwich Village folk scene who had an "authentic folk background."

The daughter of a nurse and a welder, she grew up in Enid during the Dust Bowl in an extended family in which everyone played music and sang. Part Cherokee, she experienced prejudice as well as poverty, and she struggled with both most of her life.

Described as both tough and fragile, Dalton was married and divorced twice and had two children by the time she was 21, when she left Oklahoma for New York to pursue her musical passions.

"She certainly didn't fit the mold of women in Enid, Oklahoma," says Dalton's daughter, Abralyn "Abbe" Baird, who calls her mother an early feminist who wanted to be an artist rather than a housewife.

Although Dalton initially left her behind, Abbe recalls that her mother soon came back to Oklahoma and essentially kidnapped her, spiriting the girl back to a dismal NYC apartment with no working toilet. Since Dalton had no money for a babysitter, her daughter accompanied her practically everywhere, including to the coffeehouse shows she played, where Abbe would sit on audience members' laps and paint their faces while they listened to her mom perform.

2. Dalton wrote, but she didn't write her own songs

While the '60s New York folk scene was a time and place dominated by singer-songwriters, Dalton didn’t pen her own material. She was an excellent long-neck banjo and 12-string guitar player and an unsurpassed song interpreter with a haunting voice.

Whether she was covering Motown hits, obscure country tunes or forgotten folk standards, her distinctive phrasing and wounded-dove delivery made Dalton's rendition of any given song singular and instantly recognizable. She was the kind of soulful singer that songwriters want to write signature tunes for, as Dino Valenti did with the mournful ballad "Something on Your Mind."

Although she only penned a few songs — including the wistful ode "Remembering Mountains" — Dalton filled journals with poetry and other lyrical musings. Her friend and fellow guitarist Peter Walker, who ended up with her diaries after Dalton died, remains mystified that she never put her poems to music, even though she obviously had the musical chops to do so.

And other musicians made songs out of her poems, as evidenced by the 2015 tribute album "Remembering Mountains: Unheard Songs by Karen Dalton," featuring Williams, Sharon Van Etten, Patty Griffin and more.

Despite her unique voice and musical skills, Dalton never achieved fame and sometimes seemed to actively avoid potential stardom. Pal and fellow folkie Dick Weissman recalls introducing her to John Phillips, but they couldn't work together because “Karen liked to control things, and John had to control things.” Phillips went on to found The Mamas & the Papas.

“She was very frustrated with the mechanism of getting known," shares musician Richard Tucker, Dalton's third husband.

Although she was aware of and even arrogant about her talents, Dalton wasn't interested or comfortable with trying to entertain a crowd or compromising her artistic vision.

Once the couple moved from New York to Colorado, Tucker says Dalton was most at ease playing with pals at backyard barbecues or homey potlucks, often contributing a pot of her famously tasty Oklahoma beans to the menu.

By the time Capitol released her debut album, "It's So Hard to Tell Who's Going to Love You the Best," in 1969, the popularity of folk music was fading.

Still, she was one of first artists Woodstock co-founder Michael Lang signed to his label Just Sunshine Records, on which she released her second and final album, "In My Own Time." Although it wasn't commercially successful, Lang booked her to open on tour for up-and-comers Santana, but Dalton's intimate acoustic performances were a poor fit for the large venues and raucous crowds of a rock act.

Her friends and bandmates note that the failure of that tour was "the beginning of the end" of Dalton's career, as she slipped deeper into alcohol and drug addiction, experienced more depressive episodes and eventually fell ill with AIDs. Her later years were spent in relative isolation in a mobile home near Woodstock, New York, where she died.

4. Bob Dylan was a fan, but she had mixed feelings about him

Baird, Dalton's daughter, recalls that Dylan was eager to meet her mother, calling her "the female Woody Guthrie." But Dalton mostly told him that he was playing certain chords wrong.

Of course, Dylan went on to achieve legendary mainstream success, while Dalton remained a cult favorite.

"For a while, she was bitter that his roots music got successful," Baird says. "He was his own songwriter, and she wasn't doing her own music. She was just doing a take on other people's music."

In a rare, memorable clip from a Dalton appearance on Bob Fass' "Radio Unnameable" show, a caller says he wants to hear her do Dylan's "Ballad of a Thin Man."

"Never heard of that," Dalton replies, to which the caller responds "You're kidding me." The next sound is of a phone slamming down.

Still, Dylan helped introduce Dalton's music to a whole new generation of fans in his 2004 autobiography “Chronicles: Volume One,” calling her his favorite singer of the Greenwich Village folk revival.

“Karen had a voice like Billie Holiday’s and played the guitar like Jimmy Reed and went all the way with it," Dylan wrote.

The documentary features interviews with contemporary musicians Vanessa Carlton, Deer Tick and Nick Cave, who are all ardent admirers of Dalton's music.

Appearing alongside guitarist Ian O'Neil, Deer Tick singer-songwriter John J. McCauley says he gravitates to singers with unusual voices and "she may be the very best." Carlton submits that Dalton's point of view is what makes the songstress a standout artist, even more than her voice.

Cave is the most effusive in his praise of Dalton's music, describing how he had to pull over to the side of the road once because listening to a cassette of her crooning "Something on Your Mind" drove him to tears.

"It really changed a lot of how I looked at music — and I think that the Bad Seeds have been attempting to write that song for years," Cave said, referring to his band.

6. A fire makes the documentary even more important

All of Dalton's journals, poems and handwritten lyrics were destroyed in a 2018 fire.

Fortunately, as Walker notes, the film crew had created a photographic record of them months before they were consumed in the blaze.

That makes the documentary even more vital as an archival record of her music and perspective.

Dino Martin, the son of legendary crooner Dean Martin, was a multi-talented performer just like his father. But his life was cut much too short, long before his famous dad passed away.
1 DAY AGO