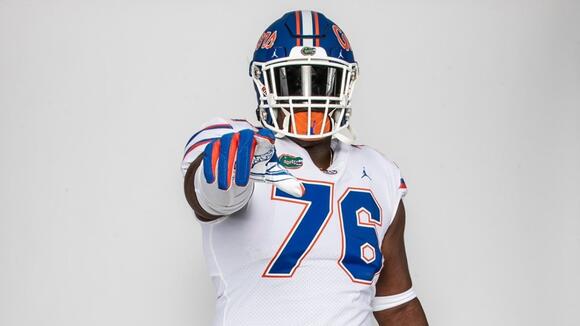 Head coach Billy Napier has landed the signature of an underrated 2022 offensive line prospect for the Florida Gators, bringing over Missouri City, Texas native Christian Williams from his previous gig.

Flipping his commitment from the Louisiana Ragin’ Cajuns just days after Napier’s hiring at Florida became official, Williams serves as a piece of the head coach's puzzle to retool a lackluster group in the offensive trenches left behind by Dan Mullen, John Hevesy and the Gators' former coaching staff.

To make matters even more significant, Williams was officially the first recruit to commit under Napier’s rule in Gainesville. He did so during an official visit to the school on Dec. 10-12, joining longtime pledges fellow offensive linemen David Connor (Deerfield Beach, Fla.), Jalen Farmer (Eastside, Ga.) and projected lineman/tight end prospect Tony Livingston (King, Fla.) in the UF commitment class.

Playing the majority of his high school snaps at right guard, Williams presents a towering presence, strong initial punch when engaging with defenders and a valuable mean streak that is exemplified by his desire to finish blocks and play through the whistle.

All of those are skills the Gators’ offensive line desperately needs.

Standing at 6-foot-4, 320 pounds, the Fort Bend Marshall (Texas) product has the physical intangibles to play at all five positions along the offensive line. However, given Florida’s dire need for talent on the line’s exterior, Williams will likely be groomed as a reserve tackle in the early days of his collegiate career with the goal of developing into a future starter.

Williams becomes the third player to officially sign with the Gators in the 2022 cycle, joining defensive back Devin Moore and athlete Tony Livingston in Napier’s signee class.

You can check out Williams’ senior season highlight reel here.

Stay tuned to AllGators for continuous coverage of Florida Gators football, basketball and recruiting. Follow along on social media at @SI_AllGators on Twitter and Florida Gators on Sports Illustrated on Facebook.

The final details for Florida vs. Missouri have been ironed out.
GAINESVILLE, FL・6 HOURS AGO
AllGators

Five takeaways from the Gators' back-and-forth defeat to the Volunteers.
GAINESVILLE, FL・1 DAY AGO
AllGators

Gators Fall Out of AP Top 25 Following Loss to Volunteers

The Florida Gators are back where they started the 2022 season in the rankings after Saturday's loss to Tennessee.
GAINESVILLE, FL・1 DAY AGO
AllGators

The Gators fall to Tennessee for just the second time in the last 18 matchups, 38-33.
KNOXVILLE, TN・2 DAYS AGO
AllGators

The Florida Gators trail the No. 11 Tennessee Volunteers in the annual SEC East matchup.
GAINESVILLE, FL・2 DAYS AGO