Man Mauled to Death by Pack of Dogs, Family Claims 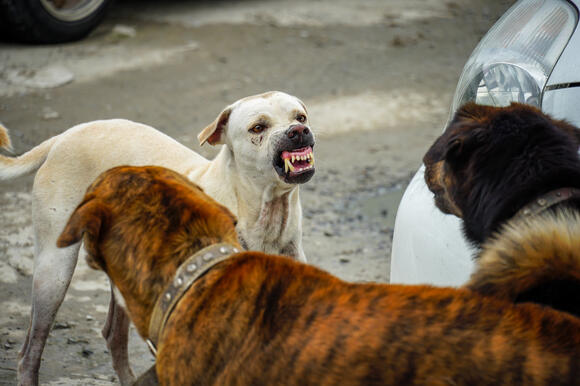 A man from Montana who was found dead on Sunday was killed by a pack of dogs , according to his family.

Duke Little Whirlwind, 58, was found just before noon on Sunday on a dirt road near his home in the Northern Cheyenne Reservation of Lame Deer in Rosebud County.

His niece, Avalee Little Whirlwind, told KRTV that her uncle had ventured out at 11 a.m. that morning to fetch a bicycle that he had repaired. He never returned home and his body was discovered soon after by a neighbor.

Avalee told the news outlet that all signs point to her uncle falling victim to a pack of dogs .

She said that her brother saw Duke's body and claimed "all of his clothes" had been "ripped off." He was found lying "face down" while "those dogs were still running around."

"There's no other reason for him to be laying there in his blood," she said. "The coroner said he was really torn up."

Authorities arriving on the scene had Duke's body transported by the Rosebud County coroner to Forsyth late Sunday evening.

His remains have since been transferred to the state crime lab in Billings where an autopsy will be conducted.

No official cause of death has been released.

Avalee is adamant her uncle died as a result of a dog attack though and told the news outlet incidents of this kind have become "a very big problem" in the town.

"People walk around with scars on them," she said. "There's been near-death experiences."

Tom MexicanCheyenne, a Lame Deer resident of some 40 years, backed up Avalee's claims, telling KRTV that these kinds of attacks happen "all the time."

He claimed that though the incidents are reported to the local Bureau of Indian Affairs (BIA) Police , "nothing ever gets done."

"They say it isn't their responsibility," MexicanCheyenne said.

Avalee later challenged BIA over their perceived lack of action and threatened to "shoot these dogs myself" in a warning that resulted in her being put in handcuffs, though she was eventually let go.

Since then, she confirmed that the owners of the four dogs alleged to have been responsible for the killing have been shot dead by their owners.

Avalee was reportedly shown the spot where they were killed and subsequently took pictures of the dogs that were shot dead.

The violent incident is the latest involving a dog in the U.S.

In November, a North Carolina man shot dead two of his neighbor's dogs after he claimed they attacked his daughter and granddaughte r.

Prior to that, in October a 7-year-old Oklahoma boy was mauled to death in his backyard by a dog his family had rescued just three weeks earlier .

that's the reason to have gun loaded just in case ... if they find me they all would be death meat dogs for sure ...

dogs running loose in packs can be dangerous even one can be dangerous that's why all dogs should have a secure adequately fenced yard loving responsible owner access to home and not be loose without supervised. Obviously this was not the kind of home these dogs had. The dog's owners are responsible for this tragedy as well as the law enforcement especially since this seems to be a common occurrence. If people are not responsible pet owners they should be barred from having them

People forget that all dogs are killers with a killer instinct. They are wolves that man has turned into pets. I don’t trust any dog much less a pack.

Cass County Sheriff's Office is now looking for answers after the two dogs were found underneath an overpass with tied legs and gunshots to the head.
CASS COUNTY, IA・1 DAY AGO
Newsweek

The father of the children rushed to the home after the mother posted an alarming video to Instagram in which she appeared to be covered in blood.
NEW ORLEANS, LA・2 DAYS AGO
Newsweek

Woman Shot Over 20 Times by Partner in Front of Kids Survives: Cops

Doctors were reportedly stunned that Nikeya Shumake was able to survive being shot more than 20 times.
MILWAUKEE, WI・8 HOURS AGO
Newsweek

The rescuers then had to knock door-to-door in the local area to track down the missing pet's owners.
PERRYVILLE, MO・2 DAYS AGO

Sheriff William Snyder said he had never seen anything like it in all of his years in law enforcement.
MARTIN COUNTY, FL・4 HOURS AGO
The US Sun

A TEENAGER was “swallowed up” after falling to his death at a power plant while watching the sunset with his friends. Anthony Clawson, 18, and three of his friends were visiting the Market Street Power Plant on Friday evening when their trip ended in tragedy. As the teens...
NEW ORLEANS, LA・7 DAYS AGO
Insider

Kiely Rodni, 16, was last seen at a party near a campground in Truckee, California, early Saturday morning.
TRUCKEE, CA・2 DAYS AGO
The US Sun

A NEW federal law that can force police to reinvestigate a cold case is a "promising step" towards finding JonBenét Ramsey's killer. John Andrew Ramsey - JonBenét's half-brother - told The U.S. Sun in an exclusive interview that the Homicide Victims' Families Rights Act provides "accountability and transparency."
BOULDER, CO・1 DAY AGO

21 years ago, a 10-year-old with a "secret older boyfriend" left school with a strange man. She was never seen again.

10-year-old Bianca Elaine Lebron lived with her parents and older sister Janissa in Bridgeport, Connecticut. According to The Charley Project, The fifth-grader excelled academically, loved to dance and sing, and had a pet hamster named Nina.
BRIDGEPORT, CT・1 DAY AGO
Daily Mail

Alabama boy, 12, who fabricated story about an intruder killing his mother admits to cops that he accidentally shot her dead in their home

A 12-year-old boy confessed to accidentally shooting his mother, a 29-year-old registered nurse, after he originally claimed she was killed by an intruder in the family's Forestdale, Alabama home. Ayobiyi Cook, who friends called 'Yo-Yo', was found dead in the suburban home on the 2400 block of Freemont Avenue after...
FORESTDALE, AL・1 DAY AGO
True Crime Mysteries (Megan)

Her parents, Tina and Dean Clouse, were murdered in 1980 in Texas. The investigation into their murders is still ongoing. Tina, Dean, and Holly (image courtesy of Identifinders International)
NEW SMYRNA BEACH, FL・20 HOURS AGO
Newsweek

Police are carrying out an investigation into the fatal shooting.
ATLANTA, GA・2 DAYS AGO

The man reportedly left his home with the children after making several threatening remarks, hours before all four were found dead.
OKLAHOMA CITY, OK・2 DAYS AGO
Newsweek

Dad With Toddler on Lap Balks at Removal From Plane, Threatened With Arrest

"I was not only shocked that they removed us from the flight but [also] shocked by their response and the way we were handled," Chrisean Rose told Newsweek.
ATLANTA, GA・1 DAY AGO
Newsweek

Police said the child initially fabricated a story about how his mother died.
FORESTDALE, AL・1 DAY AGO
Newsweek

The decomposing body of the woman has not yet been identified.
CHICAGO, IL・1 DAY AGO
NBC News

A 4-year-old boy is dead after wandering onto an Indiana highway on Monday. According to a press release from the Warrick County Sheriff’s Office, the boy, Braxton Freeze, had been staying at a place of business with his mother and her boyfriend at the time of the accident, which occurred around 4:01 a.m. After leaving the establishment unnoticed while the adults were asleep, Freeze was struck by a vehicle headed west on State Road 66.
WARRICK COUNTY, IN・17 HOURS AGO
Newsweek

The stepmother left the 9-year-old alone in the home after she became furious with the child.
FAMILY RELATIONSHIPS・2 DAYS AGO
Newsweek

"This isn't a social visit, it's a family 'emergency,'" wrote one Redditor.
RELATIONSHIP ADVICE・1 DAY AGO
Newsweek

The gun was registered to one of the boy's relatives, who works as a security guard, police said.
BALTIMORE, MD・2 DAYS AGO