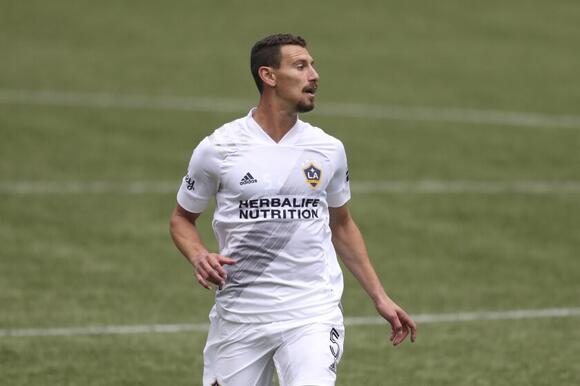 And Vanney may not be done. The Galaxy are reportedly close to finalizing another trade, this one involving national team midfielder Sebastian Lletget, with the New England Revolution the most likely landing place.

Steres, 31, who made his MLS debut in 2016, was one of the last links to coach Bruce Arena’s dynasty teams with the Galaxy . But he registered career lows for games (18), starts (13) and minutes played (1,134) under Vanney. Steres’ 140 appearances for the Galaxy overall ranks 14th all-time.

The center back, who is entering the option year of his contract, was guaranteed $393,750 last season, according to the union figures.

The Galaxy received Houston’s third-round pick, the 60th selection overall, in next month’s MLS SuperDraft in return for Steres. The Galaxy will also retain an unspecified portion of Steres’ salary budget charge in 2022.

Zubak, 23, made 17 starts the last two seasons, scoring three times. But after the midsummer signing of Dejan Jovelic, he played only 27 minutes. Signed as a homegrown player, Zubak made his Galaxy debut in 2019. The Galaxy received Nashville’s natural first-round pick, the 21st overall, in the SuperDraft for Zubak.

Vanney brought in 18 new players last season, when the Galaxy finished 13-12-9 and missed the playoffs for the fourth time in five years. Zubak and Steres are two of nine players whom the Galaxy have let go this month. And another could be leaving soon if the final details of the Lletget trade are worked out.

Lletget, 29, who joined the Galaxy in the spring of 2015, is the longest-serving player on the roster. He has made a team-high 28 appearances with the national team since Gregg Berhalter took over as coach in 2019, but Vanney couldn’t find a role for him, with Lletget playing only 1,836 minutes in 2021, his fewest in a full season since coming to MLS for England’s West Ham United. He scored three times and picked up five assists.

Trading Lletget, who was guaranteed just more than $923,000 in 2021, is something the Galaxy have been exploring for weeks, with New England, where Arena now coaches, reported to be among the most interested suitors. Arena not only brought Lletget to the Galaxy, but he also gave him his first cap with the national team.

The Galaxy are also said to be interested in bringing Argentine World Cup veteran Cristian Pavón back to the team. Pavón spent part of 2019 and all of 2020 with the Galaxy on loan from Boca Juniors, leading the team in goals (10) and assists (7) while playing every minute of his COVID-shortened second season.

The departure of captain Jonathan dos Santos, whose contract expired this year, opens a designated-player spot for Pavón and the Galaxy will also save nearly $3.5 million in salary by clearing Dos Santos, Lletget, Steres and Zubak from the roster.

The Galaxy had hoped to bring Pavón back last winter but backed off when he was accused of rape in Argentina. Pavón has reportedly cooperated with the investigation while denying the allegations, with his lawyer saying the player has been the victim of an extortion scheme. The case, which doesn’t appear close to being decided, is still working its way through the Argentine legal system with the Galaxy an interested and uneasy observer.

Pavón is under contract with Boca through June. If the Galaxy wait until the summer, they could sign him without having to pay a transfer fee.

LAFC has traded goalkeeper Pablo Sisniega to the MLS expansion team in Charlotte in exchange for $50,000 in allocation money.

On Sunday LAFC also acquired Argentine defender Franco Escobar from Atlanta United for $250,000 in general allocation money, which could rise to $600,000 with other incentives.

Sisniega, 26, joined LAFC for the 2019 season and made six starts in place of regular keeper Tyler Miller, finishing 3-2-1. He won a battle with Kenneth Vermeer for the starting job the next season, winning seven of 14 regular-season starts, then lost that job to Tomás Romero last season when he won only one of his last seven starts.

Sisniega, who was born in Mexico City, played in the youth programs at Chivas, with the Philadelphia Union and in Spain with Real Sociedad. He made $150,000 last year, according to figures provided by the players’ union.

LAFC has started six players in goal in its four seasons and only one, Romero, remains on the roster.