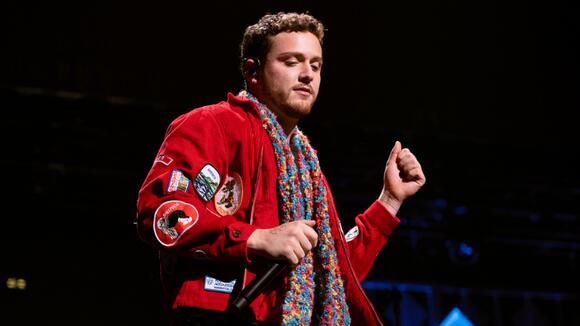 Bazzi took the stage at the 2021 iHeartRadio Jingle Ball presented by Capital One to perform several of his hit records including fan favorites like "Mine" and classic tracks like his 2018 single "Beautiful" featuring Camilla Cabello.

Fans captured footage of the 24-year old star -- who also took the stage during the Los Angeles stop of the iHeartRadio Jingle Ball -- as he was all smiles in New York City while arriving at Madison Square Garden ahead of his performance.

The "I Like It" singer's epic performance comes just months after he opened up to Ryan Seacrest about making new music, post pandemic, sharing:

"I’m really simply having more fun making music and not really complicating things too much. It's a testimony to coming back into this new world and trying to manifest some positivity.”

The 2021 Jingle Ball Tour presented by Capital One kicked off on November 30th in Dallas/Fort Worth, Texas, and is making stops in cities across the country in cities including Minneapolis/St. Paul, Philadelphia, Boston, Washington, D.C., Chicago, and Atlanta, before wrapping up Miami/Ft. Lauderdale, Florida on December 19th.

The Virginia rapper brings his latest album to life at the BET Hip-Hop Awards 2022.
CELEBRITIES・21 HOURS AGO
iHeartRadio

Rihanna is speaking out for the first time since she was confirmed as the headliner for the Super Bowl halftime show. On Tuesday, October 4, TMZ caught up with the ANTI singer as she was leaving a grocery store in Los Angeles. Rihanna noted how the interviewer sneaked up on her before she responded to questions about her upcoming performance. When asked about how she feels about her set at the big game, RiRi admitted that she feels "nervous" but is more excited than anything else. The interviewer tried to see if she decided on who she may bring out with her, but didn't get far.
LOS ANGELES, CA・9 HOURS AGO
iHeartRadio

Here's Everything Coming To Netflix In October 2022

The "Sex and the City" movies, "How to Lose a Guy in 10 Days" and "The Jeffrey Dahmer Tapes" are coming to Netflix.
BEHIND VIRAL VIDEOS・1 DAY AGO

He also debuted a new Smashing Pumpkins track on the latest episode of 'Thirty-Three With William Patrick Corgan.'
MUSIC・22 HOURS AGO
iHeartRadio

MGK asked his fiancée to make him look like the year 3050 during a livestream.
CELEBRITIES・8 HOURS AGO
iHeartRadio

The Florida rapper performed their popular collaboration during his appearance at the BET Hip Hop Awards 2022.
INGLEWOOD, CA・21 HOURS AGO
iHeartRadio

JT was not feeling the fan's vibes.
NEWARK, NJ・2 DAYS AGO

"A lot of times, what he means is misconstrued."
CELEBRITIES・11 MINUTES AGO
iHeartRadio

MGK Covered Ed Sheeran In London, And The Crowd Couldn't Get Enough

'See I came here I think I’m Ed Sheeran all of a sudden.'
MUSIC・6 HOURS AGO
iHeartRadio

DJ Drama and Don Cannon are also throwing down on the album.
CELEBRITIES・3 HOURS AGO
iHeartRadio

Led Zeppelin didn't easily forgive the years of abuse by the music press and Jimmy Page made that clear to Jann Wenner.
CELEBRITIES・7 HOURS AGO

Here's when you can catch them.
MINNESOTA STATE・4 HOURS AGO
iHeartRadio

Diddy prepared the Atlanta rapper for a comeback.
CELEBRITIES・2 DAYS AGO
iHeartRadio

The Quality Control rapper has been teasing his next LP all year.
MUSIC・1 DAY AGO

Find out why it was a rough day for David Lee Roth and what scientists discovered about Queen's 'We Are the Champions.'
MUSIC・2 DAYS AGO
iHeartRadio

BTS announced the return of their web series "RUN BTS" in August.
YOGA・8 HOURS AGO
iHeartRadio