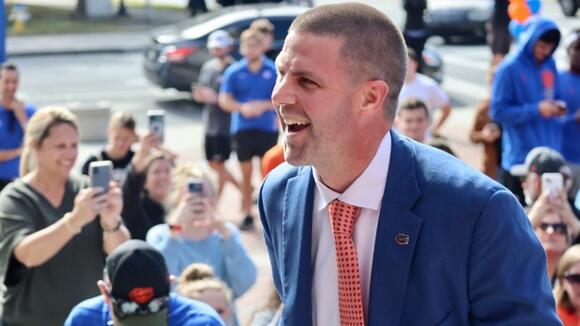 The Florida Gators have landed their first commitment under head coach Billy Napier, that being Fort Bend Marshall (Texas) 2022 offensive lineman Christian Williams, according to Blake Alderman of 247Sports. Williams is beginning an official visit to Florida on Friday evening.

Williams, a 6-foot-4, 320-pound guard, previously committed to Napier's former school, the Louisiana Ragin' Cajuns, in June. However, not long after Napier's arrival in Gainesville, Williams scheduled an official visit to the program and quickly flipped his commitment to the Gators.

According to The Advocate, Williams, who only holds offers from Florida and Louisiana, impressed Napier's Ragin Cajuns coaching staff during a summer camp earlier this year, which led to his first offer and a quick commitment to ULL.

The news of WIlliams' commitment comes after Florida lost seven class of 2022 pledges since the firing of former head coach Dan Mullen and Napier's hiring as the Gators' next head coach.

You can check out Williams' senior season highlight reel below.

Stay tuned to AllGators for continuous coverage of Florida Gators football, basketball and recruiting. Follow along on social media at @SI_AllGators on Twitter and Florida Gators on Sports Illustrated on Facebook.

Playmakers Emerging in the Passing Game for Gators

Florida's passing game production has improved greatly over the last two weeks, not only due to Anthony Richardson's increased comfort but the emergence of several playmakers.
GAINESVILLE, FL・1 HOUR AGO
AllGators

Observations and Notes From Gators Basketball Preseason Practice No. 5

What about Florida Gators' hoops stands out as they complete their first week of preseason practices?
GAINESVILLE, FL・23 HOURS AGO

The Good, Better and Best from the Florida Gators' rout of Eastern Washington

The good, better and best from the Florida Gators' 52-17 rout of Eastern Washington on Sunday.
GAINESVILLE, FL・50 MINUTES AGO
AllGators