A Breakdown of College Football's Awards 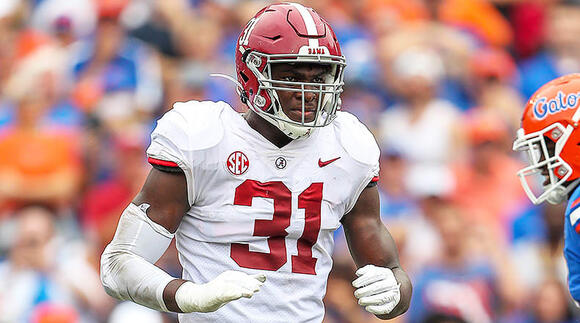 Here is a breakdown of the major college football awards and their history.

With the college football regular season over that means it's time to hand out some hardware. There are currently more than 20 awards presented to recognize the best in college football in all aspects of the game. The most prestigious is the Heisman Trophy , which will be announced on Saturday, Dec. 10 (8 p.m. ET on ESPN), while more than a dozen were handed out on Dec. 8 during the "Home Depot College Football Awards" show.

Related: Who Should Win the Heisman Trophy in 2022?

With so many awards, it is tough to keep track of them so here is a breakdown of each award (in alphabetical order) and its history.

Honors: Most Inspirational Individual or Team
Founded: 1996
First Recipient: Daniel Huffman, a high school student who gave up his college football career to donate his kidney to his grandmother (1996)
This Year's Recipient: Tylee Craft, North Carolina

The Buffalo Bills are coming off a disappointing end to their season, losing 27-10 at home against the Cincinnati Bengals in the AFC Divisional round in the playoffs. Entering the offseason, the Buffalo Bills have started looking toward the future and made the tough decision to fire one of their long-tenured coaches.
8 HOURS AGO
Athlon Sports

Ezekiel Elliott wants to remain a Cowboy in 2023.  Speaking to reporters following Dallas' divisional round loss to San Francisco on Sunday, the Cowboys' running back said so himself.  "Definitely thought about it. I want to be here. I don't have a crystal ball but I want to be here," ...
DALLAS, TX・2 DAYS AGO
Athlon Sports

Aaron Rodgers' name has been all over the news this week.  On Saturday, NFL insider Adam Schefter first announced that a "trade is a very realistic scenario" for the Packers' quarterback.  Then, on Monday, NFL Network's Ian Rapoport made an appearance on the Pat McAfee Show. During ...
GREEN BAY, WI・2 DAYS AGO
Athlon Sports

It's a good day in Kansas City. Chiefs quarterback Patrick Mahomes is back at practice on Wednesday after suffering a high ankle sprain against the Jacksonville Jaguars in the divisional round of the playoffs.  “He did the walkthrough this morning and he'll practice this afternoon,” Chiefs ...
KANSAS CITY, MO・1 DAY AGO
Athlon Sports

There's quite a bit of skepticism around the NFL that the Kansas City Chiefs will be able to avenge last season's AFC Championship loss to the Cincinnati Bengals when the two teams stage a rematch on Sunday. Not only have the Bengals won each of their past three meetings with the Chiefs, most ...
CINCINNATI, OH・1 DAY AGO
Athlon Sports

In the storied history of playoff matchups between the Dallas Cowboys and San Francisco 49ers, the two teams' most recent meeting likely won't make the top of anyone's list. The 49ers won 19-12 to advance to the NFC Championship game. But Sunday's iteration may go down as the most-watched. Fox ...
DALLAS, TX・2 DAYS AGO
Athlon Sports

Former Texas Tech and California quarterback has enjoyed six seasons in the NFL, albeit without seeing much action on the field.  Doing a tour of New York teams, Webb has spent time with the Jets, Giants, and Bills.  And according to a report today from Adam Schefter, the 28-year-old is ...
CALIFORNIA STATE・2 DAYS AGO
Athlon Sports

San Francisco 49ers coach Kyle Shanahan has made his first public comments about defensive end Charles Omenihu's arrest. Omenihu was arrested on a charge of misdemeanor domestic violence following an alleged incident with his girlfriend on Monday, according to the San Jose (Calif.) Police ...
SAN JOSE, CA・1 DAY AGO
Athlon Sports

The NFL announced the finalists for each of its major end-of-season awards on Wednesday. The winners will be announced at the NFL Honors awards show on Feb. 9. Normally, you would expect the outrage of fans to wait until the winner of each award is announced. But many around the NFL can't believe ...
1 DAY AGO
Athlon Sports

Our experts offer free NFL picks for the AFC and NFC Championship Games as the matchup for Super Bowl LVII will be decided on Sunday.
1 DAY AGO
Athlon Sports

Football fans woke up to saddening news this Thursday morning.  Jessie Lemonier, a 25-year-old former Detroit Lions and Liberty University linebacker, has reportedly passed away.  In light of the tragic development, the Lions released a statement today. "We are shocked and saddened to ...
DETROIT, MI・8 HOURS AGO
Athlon Sports

The Buffalo Bills' matchup against the Cincinnati Bengals on Sunday didn't go as the team hoped, with the Bengals cruising to a 27-10 victory and ending the Bills' season in the process. But the game did provide one thing worth celebrating. Bills safety Damar Hamlin attended the matchup, making his ...
CINCINNATI, OH・2 DAYS AGO
Athlon Sports

The first spot on the NFL coaching carousel has been filled. According to Ian Rapoport of NFL Network, the Carolina Panthers are set to hire former Indianapolis Colts coach Frank Reich for the team's head coaching vacancy. Reich replaces Matt Rhule, who the team fired after five games in 2022. ...
CHARLOTTE, NC・5 HOURS AGO
Athlon Sports

Despite Stetson Bennett's many accolades from his decorated college career, analysts lack a clear consensus on when he'll be selected in the upcoming NFL draft. Bennett won a Manning Award, guided Georgia to two national titles, and holds the Bulldogs' record for most passing yards in a season. In ...
ATHENS, GA・1 DAY AGO
Athlon Sports

NFL Insider Believes 1 Head Coaching Hire Could Be Made Today

After letting a few off of the ride in 2022, the NFL coaching carousel may open up on Wednesday.  Mike Florio of ProFootballTalk wrote that some believe the Denver Broncos could fill their head coaching vacancy as soon as Wednesday.  The team already interviewed former New Orleans Saints ...
DENVER, CO・1 DAY AGO
Athlon Sports

Look: 2 Raiders' Stars Could Be On The Move This Offseason, Per Report

ESPN's Jeremy Fowler has been busy on Tuesday.  Earlier today, the NFL reporter surprised the football world by announcing that Las Vegas was one of "about three teams" Tom Brady would consider joining next season.  In order for Brady to land with the Raiders, though, the Vegas ...
LAS VEGAS, NV・2 DAYS AGO
Athlon Sports

The Carolina Panthers on Thursday surprised the football world by hiring Frank Reich for the team's head coaching vacancy.  Just yesterday, fans had heard that Kellen Moore impressed the Panthers brass in his interview for the role, but ultimately Carolina went with the more experienced ...
CHARLOTTE, NC・5 HOURS AGO
Athlon Sports

The list of NFL MVP finalists was released this morning, and the following players made the cut: Patrick Mahomes, Josh Allen, Jalen Hurts, Justin Jefferson, and Joe Burrow. Jefferson of the Minnesota Vikings was the noteworthy appearance here, as a non-quarterback has taken home MVP honors just ...
1 DAY AGO