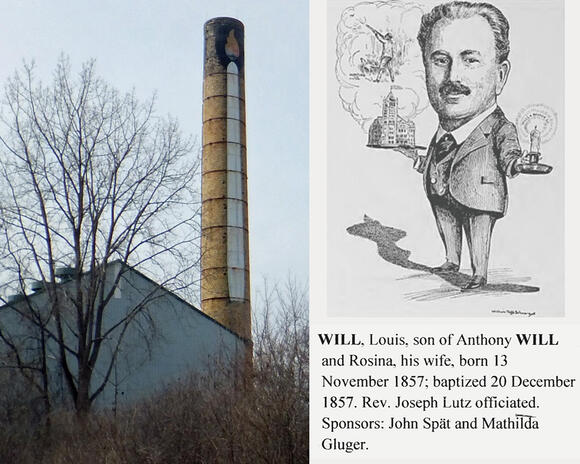 SYRACUSE — The Christmas season is enriched by candles.

When entering Syracuse on Route 81 from the north, just before you reach Onondaga Lake, you will see a 100-foot chimney to your right (to the west) with a candle painted on it. This is the site of the long-closed Will and Baumer Candle Company.

During the early part of the 20th century, Will and Baumer was one of the largest candle companies in the world. Syracuse also claimed four other candle companies and was known as “Candle City USA.”

German immigrant Anthony (Anton) Will is considered the founder of Will and Baumer. Will, who was trained as a candle maker, arrived in Syracuse in 1855 and began working as a carpenter at the Syracuse salt works. He quickly recognized that there were no candle factories in the United States at the time. Responding to that opportunity, Will and his wife Rosina began making beeswax altar candles for the local Catholic church in their Northside home. Business quickly grew and he was receiving orders from New York City. A priest lent him money to expand his business. He became a wealthy man but died in 1866 in his early thirties.

My mother, Grace (Spaeth) Dahlin’s grandfather, John Spaeth, was Will’s cousin. John and Anthony Will’s maternal grandmothers were sisters. Both were active members of the German-founded Assumption Church on North Salina Street. Will was a witness to John’s 1857 marriage and John was godparent to two of Anthony and Rosina’s children.

Of particular interest is Will’s oldest son, Louis Will (1857-1932), who not only was the first president of Will and Baumer, but he was the first independent mayor of Syracuse (1914-1916). Current mayor Ben Walsh is the second independent candidate to serve.

Roger Dahlin is a wildflower gardener and historian in Baldwinsville. To learn more, visit elderberryconsulting.com/roger-dahlins-books/ .

The Bville Connection hosts Park at Dark on Oct. 1 in North Syracuse

NORTH SYRACUSE — Nonprofit events committee The Bville Connection is teaming up with the Village of North Syracuse Parks and Recreation Department to kick off spooky season. Park at Dark takes place from 4 to 8 p.m. Saturday, Oct. 1, at Heritage Park in North Syracuse. Children can show...
NORTH SYRACUSE, NY・22 HOURS AGO
Eagle Newspapers

BALDWINSVILLE — It may have taken place downstate, but September’s edition of New York Fashion Week contained a bit of Upstate New York. Baldwinsville resident Morgan Striggles graced the catwalks of three runway shows Sept. 10. Striggles moved to Syracuse as a youth but returned to his hometown...
BALDWINSVILLE, NY・20 HOURS AGO
Eagle Newspapers

BALDWINSVILLE — What do lady’s slippers, vanilla and “Dracula” all have in common?. They are all types of orchids, one of the two largest families of plants. This weekend, visitors to Beaver Lake can see these exotic blooms for themselves — and troubleshoot their own orchid woes — at the Central New York Orchid Society’s Fall Show and Sale. It is the society’s first show since 2019.
BALDWINSVILLE, NY・21 HOURS AGO

Friends of Lorenzo to open Rippleton Schoolhouse for Community Day

CAZENOVIA — On Sunday, Oct. 2, the Friends of Lorenzo (FOL) will present the annual Rippleton Schoolhouse Community Day from 1 to 4 p.m. on the grounds of the Lorenzo State Historic Site. “Kids of all ages” are invited to the restored one-room schoolhouse to enjoy historical games and...
CAZENOVIA, NY・21 HOURS AGO
Eagle Newspapers

CENTRAL NEW YORK – Despite all the rain that fell last week, area high school boys golf teams were able to get in plenty of matches knowing that cooler temperatures […]
SKANEATELES, NY・1 DAY AGO

CENTRAL NEW YORK – Sit around for a week, and anyone would get a bit antsy. The Baldwinsville field hockey had an especially good reason to get going again, having seen its fast start dissipate in a pair of mid-September losses – one lopsided to Cicero-North Syracuse, then a close one at Rome Free Academy.
BALDWINSVILLE, NY・1 DAY AGO
Eagle Newspapers

CENTRAL NEW YORK – Here was the chance for the Cazenovia girls soccer team to really put itself to the test – and it found out that it is more […]
CAZENOVIA, NY・1 DAY AGO
Eagle Newspapers

ONONDAGA COUNTY – A season ago, the boys volleyball rivalry between Cicero-North Syracuse and Liverpool, once sleepy and lopsided, took quite a turn. There were two close regular-season battles won […]
SYRACUSE, NY・1 DAY AGO
Eagle Newspapers

ONONDAGA COUNTY – One quarter remained in last Wednesday night’s field hockey showdown between Cicero-North Syracuse and Liverpool at LHS Stadium, and it was a are moment of concern for […]
SYRACUSE, NY・1 DAY AGO

NORTH SYRACUSE — At the end of Wells Avenue East and Oakley Drive in the village of North Syracuse, there is a strip of vacant land. The absentee owner owes […]
NORTH SYRACUSE, NY・20 HOURS AGO
Eagle Newspapers

CENTRAL NEW YORK – In a week where the Skaneateles girls soccer team planted itself at no. 2 in the first state Class B rankings of the fall, it had […]
MARCELLUS, NY・1 DAY AGO
Eagle Newspapers

Barnwell, Italiano square off in Manlius Town Board race

TOWN OF MANLIUS – Although much of the election focus this year will be on federal and state races, there is a local contest for a seat on the Manlius Town Board between two residents, both of whom grew up in Manlius and have chosen to make it their lifelong home.
MANLIUS, NY・16 HOURS AGO
Eagle Newspapers

ONONDAGA COUNTY – Maybe the Marcellus boys soccer team took greater notice when the latest state Class B rankings had Westhill at no. 2, well ahead of the Mustangs in the no. 13 spot. Or perhaps it was just the motivation of getting the upper hand in a long...
MARCELLUS, NY・1 DAY AGO
Eagle Newspapers

SYRACUSE — The CNY Diaper Bank, a local nonprofit that collects and has distributed over 7 million diapers to families in need in Syracuse, encourages businesses, individuals and families to participate in its activities in honor of “National Diaper Need Awareness Week” from Sept. 24-Oct. 2. Community...
SYRACUSE, NY・6 DAYS AGO
Eagle Newspapers

CENTRAL NEW YORK – In matches against top Onondaga High School League Liberty division foes, the Cazenovia and Chittenango boys golf teams found themselves humbled. Cazenovia met its fellow Lakers from Skaneateles last Wednesday afternoon and, amid one more blast of summer heat, could not keep up in a 208-245 defeat.
CAZENOVIA, NY・1 DAY AGO
Eagle Newspapers

EAST SYRACUSE – Where once it trended in the other direction, now the East Syracuse Minoa girls soccer team has the clear upper hand on its neighbors from Jamesville-DeWitt. And in their lone regular-season encounter last Thursday night at Spartan Stadium, the Red Rams did all it could to reverse this trend, only to have ESM stay perfect in 2022, prevailing by a score of 3-0.
JAMESVILLE, NY・1 DAY AGO