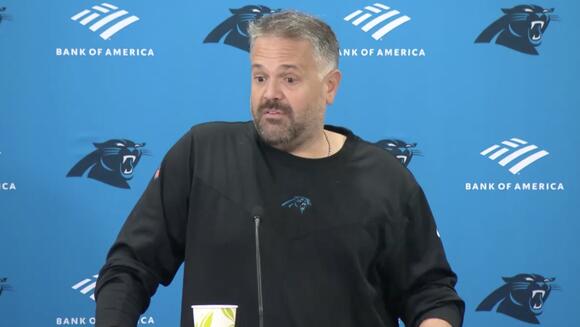 "I'm not really thinking about any of that, to be honest with you. I'm thinking about this week. When our guys have played well, we've been a good team, so I'm not looking at next week or the week after. To be quite honest with you, I think that's one of the things I've tried to instill in the guys and we're getting closer to it. What I want to see this week is a team that's focused. We had a great practice just now. We had a really nice practice on Monday, we had some good meetings. We're down some guys, so some guys are going to have to step up. I just want the coaching staff to go out there and coach their best and the players play their best and play our best game this Sunday."

"I think John will probably be out and there's a small possibility for Michael, maybe. We'd have Brady [Christensen] up, we'd have Deonte Brown who is back. Dennis Daley, Cam Erving is returning to play. Austin Pleasants we elevated last week so it'll be some mixture of those guys. It'll be a pretty good chance that three of the starters that played against Atlanta the last time won't play."

Describing Jeff Nixon as a play-caller, what he wants to see from him

"He's going to play to the guys' strengths. He's disciplined, he's not emotional. That's one of the things I like most about Jeff is that he's even-keeled. He doesn't really get too high or too low. The biggest thing I want to see from him in addition to the staff is our ability to adjust when people do something different. We've only scored 18 points on the whole year [coming out of the half/third quarter], another seven on a punt block. I'd like to see us be a team that adjusts as the game goes on and reacts to how people are playing us."

How the team is coming out of the bye week

"I think their bodies are way better. I never want to make excuses but they're certainly beat up. Seventeen games, first time in NFL history, right? So, it's hard to begin with and we have a very, very young team. Jeremy Chinn and Taylor Moton have both played more snaps, they've played three more games worth of snaps than most guys on our team. I said to Chinn, 'how do you feel?' and he was like, 'I feel a lot better than I did last year'. So that rookie year really takes a toll on people. I think the time off has been good for their bodies. I do think you can see guys like Shaq [Thompson] who has played through a ton of things this year, he's got a little more kick in his step right now because he's had a chance to take a bye and get his legs back underneath him."

Bringing in an officiating crew at practice today

"It's a reaction to the penalties. Sort of like we tried to do a couple of weeks ago but there were no NFL officials, so they coordinated with us to get some ACC officials here. If anything else just to throw things at problems. What's crazy about our penalties is on the last 54 plays to start a drive, we've started with ten penalties. So, the penalties are actually happening on the first play of drives. When you have those things is it a lack of discipline? Eh, yes. At times it is, don't get me wrong. It's also sometimes you're trying so hard to win because you care about the team that you're just doing a little too much. So, I think for our guys hearing that was like, 'Wow, we're really hurting ourselves at times.'"

A huge hire by Frank Reich and company.
MINNESOTA STATE・2 HOURS AGO
AllPanthers

David Tepper Admits He Made a Mistake

The Panthers owner has learned from his wrongs.
CHARLOTTE, NC・2 DAYS AGO
AllPanthers

Carolina looks to add a young star to its staff.
DENVER, CO・1 DAY AGO
AllPanthers

Reich Gives Analysis On the Talent He Inherits

Carolina could be one piece away from becoming a true contender in the NFC.
CHARLOTTE, NC・2 DAYS AGO
AllPanthers

A couple of Carolina specialists were recognized for their 2022 season.
CHARLOTTE, NC・2 DAYS AGO
AllPanthers

These four things would put the Panthers in the right direction.
CHARLOTTE, NC・10 HOURS AGO
AllPanthers

Who Will Have Control Over the Panthers' 53-Man Roster?

Frank Reich details how he will work with GM Scott Fitterer.
CHARLOTTE, NC・1 DAY AGO
AllPanthers

The NFL recently released its calendar for the 2023 season with plenty of key dates highlighted.
ARIZONA STATE・10 HOURS AGO
AllPanthers

Who will be joining Frank Reich's staff in Carolina? Keep up to date with all of the news and rumors here.
CHARLOTTE, NC・8 HOURS AGO