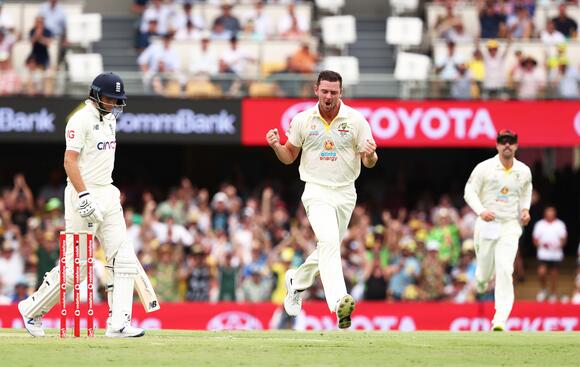 Sports stars and clubs across the world continue to provide an insight into their lives on social media.

Here, the PA news agency looks at some of the best examples from December 8.

England endured a nightmare first day of the Ashes Their team selection was questioned.

And their decision to bat first.

Shane Warne had sympathy, though.

The Queensland Police got involved.

The Barmy Army had to support from afar.

Pat Cummins, in contrast, seemed to be finding this captaincy lark quite easy.

India had a new one-day skipper.

A West Ham and England hero celebrated his birthday.

As did a long-time Lionesses leader.

Chelsea headed out into the St Petersburg snow.

Proof that even an Iceman can thaw.

Can Lewis Hamilton be boosted by his rainbow helmet again this weekend?

Surf’s up for Nicholas Latifi.

Tyson Fury had a singalong.

Andy Murray and Emma Raducanu both exited the Australian Open on a disappointing day for British players in Melbourne.Murray was bitterly frustrated by his performance against qualifier Taro Daniel while a blister on her hand hampered Raducanu against Danka Kovinic. Heather Watson also lost but Dan Evans was given a free passage through to round three when Arthur Rinderknech withdrew.Daniil Medvedev held off Nick Kyrgios in the big match of the day while top women’s seeds Garbine Muguruza and Anett Kontaveit both went out.Picture of the dayQuote of the dayMaking second round of slams is not something I find particularly...
TENNIS・2 DAYS AGO
The Independent

What the papers sayCristiano Ronaldo could be set to leave Manchester United after just one season back at Old Trafford. The Sun reports Ronaldo’s representatives have told the club that failure to qualify for next season’s Champions League would prompt the 36-year-old to look for an exit.The same paper writes that Tottenham defender Japhet Tanganga is a target for AC Milan. Spurs would reportedly be willing to sell the 22-year-old for £21million, but the Serie A title challengers are said to prefer a loan deal.Arsenal have received a loan offer for former captain Pierre-Emerick Aubameyang from Saudi Arabian team Al-Nassr,...
PREMIER LEAGUE・2 DAYS AGO
The Guardian

England and Joe Root were warned there is “no silver bullet” to remedy the various complaints about first-class cricket that have arisen following a dismal Ashes campaign.An uncomfortable spotlight has shone on the LV= Insurance County Championship after a 4-0 thrashing Down Under with Test captain Root and England and Wales Cricket Board chief executive Tom Harrison calling for a red-ball “reset”.There will be five rounds of Championship matches in June and July, as opposed to just three last year, as the competition returns to its regular two-division structure following a couple of revamped seasons caused by the pandemic.But the...
SPORTS・2 DAYS AGO
newschain

Sports stars and clubs across the world continue to provide an insight into their lives on social media. Here, the PA news agency looks at some of the best examples from January 20. Football. Jack Harrison did his bit for charity. Tottenham celebrated a dramatic night. Man Utd also had...
TENNIS・2 DAYS AGO
The Independent

England opener Tammy Beaumont believes Tahlia McGrath’s match-winning innings was one of the best she has seen after Australia stormed to a nine-wicket victory in the first Twenty20 of the Women’s Ashes.McGrath scored an unbeaten 91 off just 49 balls, hitting 13 fours and a six, as Australia chased down a target of 170 with three overs to spare in Adelaide to draw first blood in the series.The Adelaide-born all-rounder, selected ahead of Australian talisman Ellyse Perry, also impressed with the ball, claiming three quick wickets towards the back end of England’s innings to help limit the tourists to 169...
SPORTS・2 DAYS AGO
blackchronicle.com

Players to watch in the Ashes: an emerging allrounder and England’s new batting star

Deputy Editor Andrew arrived at ESPNcricinfo via Manchester and Cape Town, after finding the assistant editor at a weak moment as he watched England’s batting collapse in the Newlands Test. Andrew began his cricket writing as a freelance covering Lancashire during 2004 when they were relegated in the County Championship. In fact, they were top of the table when he began reporting on them but things went dramatically downhill. He likes to let people know that he is a supporter of county cricket, a fact his colleagues will testify to and bemoan in equal quantities.
SPORTS・2 DAYS AGO

The 26-year-old took three wickets to slow England's momentum and restrict them to 169-4 and then thumped a blistering unbeaten 91 from 49 balls to get her side home in 17 overs in the first T20 international at the Adelaide Oval. Meg Lanning made 64 not out from 44 balls,...
SPORTS・2 DAYS AGO
The Independent

England to face Afghanistan in first round of T20 World Cup

England will begin their T20 World Cup against Afghanistan and Scotland have drawn a first-round match against the West Indies.The International Cricket Council (ICC) T20 World Cup 2022 fixtures were announced on Thursday night, with England drawn in their second match against hosts and defending champions Australia on October 28 in Melbourne before backing up against New Zealand on November 1 in Brisbane.Scotland will face an as-yet unknown qualifier in Hobart on October 19. Ireland are yet to qualify for the World Cup.The fixtures for the ICC Men’s #T20WorldCup 2022 are here!All the big time match-ups and how to register...
SPORTS・1 DAY AGO
San Diego Union-Tribune

Set 170 to win by the tourists, Australia chased their target down with plenty to spare and in impressive style
WORLD・2 DAYS AGO
kelo.com

SYDNEY (Reuters) – Australia reported 64 deaths from COVID-19 on Saturday, as the most populous state, New South Wales (NSW), said the Omicron COVID-19 variant would not delay the start of the school year. NSW reported 30 deaths of patients with COVID-19, while Victoria state saw 20 deaths, and...
PUBLIC HEALTH・18 HOURS AGO
Yardbarker

Arsenal are set to play host to Liverpool at the Emirates this evening with a place in the EFL Cup final on the line. The Gunners earned a strong position going into this game in extremely tough circumstances last week. Whilst missing a number of players for various reasons, and with Granit Xhaka getting himself sent off inside the opening 30 minutes, we managed to fight until the bitter end to earn a 0-0 draw.
PREMIER LEAGUE・2 DAYS AGO
The Independent

Football club Hartlepool have paid tribute to Meat Loaf by playing a number of the late singer’s hits before kick-off.The rock star, born Marvin Lee Aday, who has died aged 74, sold millions of albums worldwide, with Bat Out Of Hell being one of the best selling albums of all time.He was also an unlikely Poolie, who adopted the League Two club after being asked to appear on Sky Sports’ Soccer AM programme in 2003.In an interview with Setanta Sports News, the singer said he had been attracted to Hartlepool by the town’s monkey legend.The boys are out to the...
SOCCER・5 HOURS AGO
The Independent

England’s Twenty20 tour of Barbados got off to a false start after they were bundled out for 103 before the West Indies reached a meagre target with nine wickets and 17 balls to spare.After being asked to bat first on a tricky pitch with inconsistent bounce, England lurched to 10 for three then 49 for seven as their Ashes batting woes transferred to the Caribbean at the outset of this five-match series.Lower-order batters Chris Jordan and Adil Rashid spared England’s blushes as they avoided a new record-low T20 total but the duo’s efforts barely papered over the cracks, with the...
SPORTS・43 MINUTES AGO
The Independent

It might still be called the Theatre of Dreams by locals and broadcasters alike, keen to talk up another big game and yet another turning point in Manchester United’s meandering, confusing season, but there’s an uncomfortable home truth growing larger by the month.A literal home truth, in this case: Old Trafford is far from a fortress these days. It’s not a place teams tend to fear. More regularly of late, it has been a sounding board of discontent, a map of malaise and a representation of greater issues within the club.United are fast-approaching a fourth consecutive season in which they...
PREMIER LEAGUE・1 DAY AGO
The Guardian

Crystal Palace boss Patrick Vieira has played down the absence of key Liverpool duo Mohamed Salah and Sadio Mane for Sunday’s meeting at Selhurst Park.The Reds will again be without their two main attackers, who are away competing at the Africa Cup of Nations in Cameroon.It will no doubt boost Palace, who lost 3-0 to Liverpool in September with the pair on target and both hit doubles against the south London outfit last season too.Jurgen Klopp’s side have coped well without Salah and Mane, winning three of the four games they have missed to progress in two cup competitions and...
PREMIER LEAGUE・14 HOURS AGO