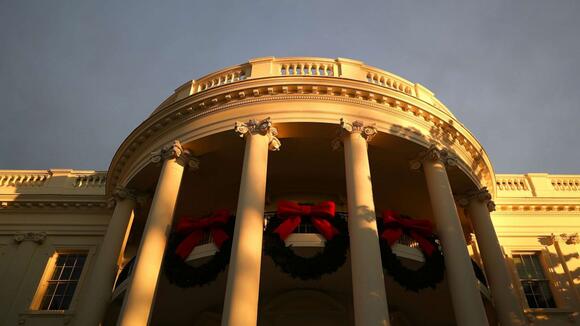 The vote was a strong bipartisan one, even though several House progressives withheld support given some of their criticisms of U.S. military policy and the increase in defense spending authority, which they had hoped to cut.

The bill includes funding to support a 2.7% pay raise for both military service members and the DOD civilian workforce.

It also includes historic reforms to how the military investigates and prosecutes sexual assault and harassment cases under the Uniform Code of Military Justice.

The bill removes the commander of a military command from "decisions related to the prosecution of covered crimes," including sexual assault. It also makes sexual harassment a crime under the Uniform Code of Military Justice.

Notably, the compromise bill dropped proposals that would have required women to register for the draft, as initially planned, due to Republican opposition.

The measure now heads to the Senate, where it's expected to pass in the coming days. After it passes in the Senate, the bill will head to the president's desk to be signed into law.

When all is said and done, Congress will have voted out the defense policy bill for 61 consecutive years.

The 2022 National Defense Authorization Act, or the NDAA, authorizes $770 billion in funding for the Department of Defense, and it increases the Pentagon's budget by roughly $24 billion above what President Joe Biden had requested.

Congressional leaders announced the compromise bill earlier Tuesday, just hours before the House was set to vote on the measure. Tuesday's compromise comes after efforts to make amendments to an earlier version of the bill stalled in the Senate.

The measure also provides funding intended to counter China and bolster Ukraine, as well as money for new aircraft and ships.

It also calls for an independent commission to analyze the 20-year war in Afghanistan.

It Increases parental leave to 12 weeks for all service members for the birth, adoption, or foster care placement of a child.

If democrats are able to change Senate rules, they could pass an election reform bill

If Democrats are able to change Senate rules and eliminate the filibuster, it could mean they’d be able to pass a federal election reform bill that Republicans, like Sen. Mike Braun, of Indiana, believe is unconstitutional. Senate Majority Leader Chuck Schumer, set a deadline of Jan. 17, for a...
INDIANA STATE・10 DAYS AGO
KPBS

WASHINGTON, Jan 13 (Reuters) - A Democratic bill intended to protect voting rights passed the U.S. House of Representatives on Thursday, though its chances were unclear in the narrowly divided Senate, where Republicans are unified in opposition. The bill is a maneuver by Democrats in which the House repackaged and...
CONGRESS & COURTS・10 DAYS AGO
kjzz.org

President Joe Biden plans to meet with Senate Democrats on Thursday to keep pushing them to change procedural rules and pass the party’s voting legislation. Among the lawmakers Biden has left to convince is Arizona’s Mark Kelly, who’s up for reelection. Biden has said senators unwilling to...
ARIZONA STATE・11 DAYS AGO

A majority of Democrats are pushing to change the filibuster, in order to pass the bills by Martin Luther King Jr. Day on January 17th
CONGRESS & COURTS・12 DAYS AGO
wbfo.org

Less than one week into the new legislative session lawmakers from across the state are joining with criminal justice reformers to push for the passage of two parole reform bills they say will help to dismantle a system which unfairly harms Black and Brown communities. The Elder Parole bill would...
ERIE COUNTY, NY・12 DAYS AGO
Chronicle

WASHINGTON — A bipartisan group of senators is exploring legislation to overhaul how Congress counts Electoral College votes, but backers of stalled voting rights legislation are lukewarm on the effort as a substitute. The Electoral Count Act is an obscure law that has come under recent scrutiny, a year after the Jan. 6 attack on the U.S. Capitol […] The post With voting rights stalled, some senators mull an update to the Electoral Count Act appeared first on Virginia Mercury.
PRESIDENTIAL ELECTION・2 DAYS AGO

"They have not had to cast one bloody vote — which shows us where they're at," Sanders said of the legislative inaction. "We have got to change that."
VERMONT STATE・14 HOURS AGO
Business Insider

Germany has opposed sending weapons to Ukraine to avoid provoking Russia while also citing Nazi atrocities committed in the region.
MILITARY・2 DAYS AGO
The Independent

The House select committee investigating the Jan 6 attack on Congress is seeking an interview with former Attorney General William Barr following the shocking revelation first reported by Politico that Donald Trump’s allies drafted an executive order directing the seizure of voting machines.Rep Bennie Thompson, the committee’s chairman, made the announcement on Sunday during an interview with ABC News. He added that lawmakers on the panel have spoken with Mr Barr previously in the course of their investigation, but were now interested in learning more about the draft executive order created some time in December of 2020.Appearing on This...
PRESIDENTIAL ELECTION・6 HOURS AGO

On Sunday the GOP lawmaker was asked about a proposed plan shared in the Trump White House to seize voting machines after the 2020 election.
CONGRESS & COURTS・12 HOURS AGO
The Guardian

"I've never been accused of this kind of thing before. It's hurtful," Mitch McConnell said after being slammed for his remarks.
CONGRESS & COURTS・2 DAYS AGO
TheAtlantaVoice

The Republican Party is working overtime to suppress the vote and undermine American democracy. It is a party which ignores climate change, the existential threat to our planet and represents the interests of the wealthy and the powerful while turning its back on struggling working-class families. The GOP is the party that gives tax breaks […] The post Bernie Sanders: The time for Senate talk is over. We need to vote appeared first on The Atlanta Voice.
PRESIDENTIAL ELECTION・21 HOURS AGO

"We made significant progress in making it easier for folks to vote in the pandemic in 2020," Sen. Coons said. "Why would we be rolling that back?"
CONGRESS & COURTS・17 HOURS AGO
The Guardian

He said the Capitol riot motivated him to start up his own law firm that represents workers who do not want to get vaccinated against the coronavirus.
PROTESTS・17 HOURS AGO