Lawyer: Case against Smollett based on testimony of ‘liars’

CHICAGO (AP) — Jussie Smollett’s defense attorney told jurors Wednesday that charges the former “Empire” actor faked an anti-gay, racist attack on himself and lied to police about it rely on the testimony of brothers who are “sophisticated liars” and “the worst type of criminals.”

Attorney Nenye Uche said in his closing argument that during testimony last week in the Chicago courtroom, one of the brothers “said ‘I don’t recall’ so many times, it is ridiculous.”

“The entire prosecution’s case, including the foundation of the case, is built like a house of cards,” Uche said.

Special prosecutor Dan Webb told the jury earlier Wednesday that the evidence against Smollett is “overwhelming,” and that what he did in January 2019 caused Chicago police to spend enormous amounts of time and resources investigating an alleged crime that turned out to be fake. Smollett, who is Black and gay, told police someone put a noose around his neck and yelled racist and homophobic slurs.

“Besides being against the law, it is just plain wrong to outright denigrate something as serious as a real hate crime and then make sure it involved words and symbols that have such historical significance in our country,” Webb said.

He also accused Smollett of lying to jurors, saying surveillance video from before the alleged attack and that night contradicts key moments of Smollett’s testimony.

“At the end of the day, he lacks any credibility whatsoever,” Webb said.

The jury in Smollett’s trial is expected to begin deliberating later Wednesday whether Smollett is guilty on six counts of a low-level felony for making what prosecutors say was a false police report about the alleged attack. He faces one count of felony disorderly conduct for each time he gave a report to three different officers.

Taking the witness stand this week, Smollett repeatedly denied the attack was a fake, telling a prosecutor “there was no hoax on my part” and that two brothers who testified against him are “liars.”

Smollett called the Osundairo brothers’ testimony that he paid them $3,500 to carry out the fake attack “100% false,” and described how he was the victim of a hate crime while walking in his neighborhood early on Jan. 29, 2019. He also testified that a $3,500 check he wrote for Abimbola Osundairo was for meal and workout plans because he was trying to get toned for an upcoming music video. 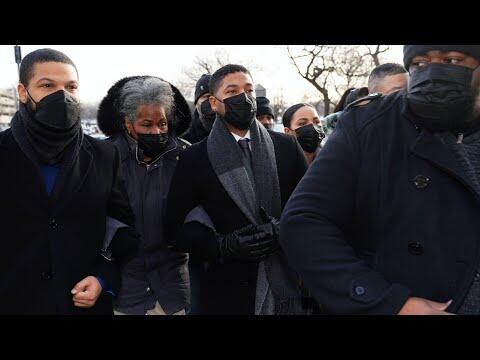 Smollett testified that he was returning home from buying a sandwich around 2 a.m. when someone yelled a racist, homophobic remark that referenced the TV show “Empire.” The person also shouted something about “MAGA country,” an apparent reference to then-President Donald Trump’s slogan “Make America Great Again.” The slogan also had been scrawled on some hate mail, featuring a drawing of a stick figure hanging by a noose, that Smollett had received at the “Empire” set, he testified.

Smollett said when he turned to confront the person, a man hit him in the head and he fell to the ground, where he said another man kicked him before the attackers ran away. Smollett said he noticed a rope, like a noose, around his neck after the attack. When he returned home, a friend called Chicago police, something Smollett said he wouldn’t have done because as a Black man he doesn’t trust police.

Uche told the jury that one of the brothers, Olabingo Osundairo, is homophobic, noting he posted homophobic slurs on social media. Uche suggested that was the motive for their attack.

“Why is that important? Because Jussie is openly gay,” Uche said.

Webb said during Wednesday’s closing arguments that Smollett lied when he testified that he picked up the Osundairo brothers a few days before the alleged attack so they could work out, rather than to do a “dry run” of the fake attack, as the brothers told jurors last week. In surveillance video, the men are seen driving around Smollett’s apartment building three times, but Smollett never parked his car to go workout.

The brothers testified that Smollett pointed out a surveillance camera near the intersection that would record the fake attack, so it could be publicized on social media. But Smollett testified Tuesday that it wasn’t unusual for him to drive around in circles, and that he canceled the plan to work out because he didn’t want to work out with Olabingo Osundairo, whom he hadn’t invited along.

During his closing argument, Uche told jurors that Smollett often drove around smoking marijuana and making music, and he questioned why prosecutors didn’t obtain surveillance video of him doing so.

“They don’t want to do it because it would show you it wasn’t a dry run,” Uche said.

The brothers also said Smollett gave them $100 to buy supplies for the attack, including a rope to fashion into a noose. Surveillance video from inside and outside Chicago businesses captured the men buying the items, Webb noted.

Webb also referenced surveillance video that shows the Osundairo brothers — who are Black — walking around the area the night of the alleged attack. Webb questioned how the brothers — who didn’t live nearby — would know to be in the area around 2 a.m. during freezing cold weather for the fake attack.

But Uche said the brothers testified they arrived 40 minutes early, adding “they were casing him.”

During his cross-examination of Smollett on Tuesday, Webb presented private messages Smollett sent to Abimbola Osundairo earlier in the evening of the alleged assault, when Smollett’s flight home to Chicago was delayed. A message about 90 minutes before the alleged assault indicated he had arrived in Chicago. Smollett first denied he sent the messages, but acknowledged them after Webb showed that he had. Smollett said he was arranging a workout.

Webb also questioned why Smollett didn’t turn over his cellphone to police or give them a DNA sample or access to his medical records to help with the investigation. Smollett testified he doesn’t trust Chicago police, and that he was concerned about his privacy.

“If he was a true victim of a crime he would not be withholding evidence,” Webb said. “Mr. Smollett didn’t want the crime solved. ... He didn’t want the brothers apprehended.”

Uche called it “nonsense” for Chicago police to ask Smollett for his DNA when he was still considered a victim of a crime. He noted Smollett later provided DNA to the FBI for a separate investigation into hate mail he had received at the “Empire” studio shortly before the alleged attack.

“He wasn’t hiding anything,” Uche said.

The disorderly conduct charge is a class 4 felony that carries a prison sentence of up to three years, but experts have said if Smollett is convicted, he would likely be placed on probation and ordered to perform community service.

He better be sentenced to some serious sign for this hate crime against America. Otherwise white folks are gonna be rioting and loot and burning cities down. Oh wait - I almost forgot. We don't do that. Never mind.

Prison for man who tried to breach cockpit, jumped from jet

MIAMI (AP) — A Canadian man has been sentenced to six months in U.S. federal prison for groping an American Airlines flight attendant. Enio Socorro Zayas, 50, was sentenced Monday in Miami federal court, according to court records. He pleaded guilty to assault in October. According to a criminal...
MIAMI, FL・1 HOUR AGO