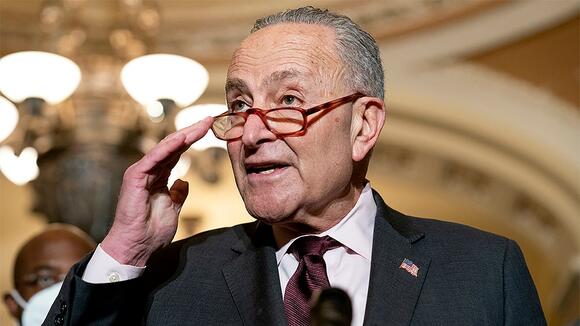 Schumer, before wrapping up the Senate for the night, moved to tee up a vote expected on Thursday, absent a deal to speed things up, on the bill that would prevent cuts to Medicare and green lights the Senate bypassing the legislative filibuster on a subsequent debt ceiling bill.

The deal was unveiled by congressional leaders earlier Tuesday and passed the House on Tuesday night with only one Republican, Rep. Adam Kinzinger (Ill.), supporting it.

To get the bill, which lays out the instructions for how separate debt ceiling legislation will be considered, through the Senate, Schumer will need the support of at least 10 GOP senators. After that bill passes, Democrats will then be able to pass a stand-alone bill on raising the debt ceiling with a simple majority, meaning they won't need any GOP support.

McConnell, during a press conference with reporters, said that he was "confident" enough GOP senators would help advance the bill that sets up a one-time exemption for the filibuster on debt ceiling legislation.

"There are always differences of opinion among Republicans about how to handle a delicate issue like the debt ceiling. We'll be voting on it Thursday and I'm confident that this particular procedure coupled with the avoidance of Medicare cuts will achieve enough Republican support to clear the 60 vote threshold," he said.

"And then later, when the majority leader decides to have the procedure, it can all occur in one day and the actual debt ceiling vote will be done at a 51 vote threshold," he added.

Even as members of GOP leadership voiced confidence the bill that eases the way to a simple majority debt ceiling vote would be able to pass the Senate, conservatives pushed back during a closed-door lunch.

Some of the 11 GOP senators who previously helped advance a debt ceiling deal in early October have also said they won't support the current deal.

Democrats have been trying to push forward voting rights legislation that Senate Republicans have been stalling through a filibuster.
CONGRESS & COURTS・1 DAY AGO
Business Insider

The House already passed voting rights legislation last year, only to be stymied by a GOP filibuster in the evenly divided 50-50 Senate.
CONGRESS & COURTS・3 DAYS AGO
Axios

Democratic leaders have found a mechanism to enable them to bypass an initial Republican filibuster and debate the party's sweeping election reform bills, according to a new leadership memo obtained by Axios. Why it matters: The strategy is the latest example of how Democrats are seeking new ways to try...
CONGRESS & COURTS・4 DAYS AGO

"I have known, liked, and personally respected Joe Biden for many years. I did not recognize the man at that podium yesterday," McConnell said.
PRESIDENTIAL ELECTION・4 DAYS AGO
WTVF

The U.S. Senate adjourned Thursday night without taking up voting rights legislation that passed in the House earlier in the day. Senate Majority Leader Chuck Schumer had wanted to put the legislation to a vote before the Martin Luther King Jr. holiday, according to The Hill. However, citing an incoming...
CONGRESS & COURTS・3 DAYS AGO
Washington Times

Schumer punts on election law, but vows vote on blowing up filibuster

Senate Majority Leader Charles E. Schumer is punting the debate on rewriting the nation’s voting laws to next week, but promising to force a vote on blowing up the filibuster if for no other reason than to put every lawmaker “on record.”. The New York Democrat announced the...
CONGRESS & COURTS・3 DAYS AGO
Daily Mail

Two can play that game: Republicans threaten takeover of Senate floor with votes on Keystone XL pipeline, abortion and the border if Dems kill filibuster to push through voting rights legislation

Senate Republicans are threatening to force votes on a slew of bills designed to split the Democratic caucus and take over the floor agenda should Majority Leader Charles Schumer carry out his threat to push through a change in Senate filibuster rules for voting rights. Senate Minority Leader Mitch McConnell,...
PRESIDENTIAL ELECTION・6 DAYS AGO

Senate Minority Leader Mitch McConnell, R-Ky., has now repeatedly threatened harsh consequences if Democrats change the filibuster rule and allow bills to pass the Senate with a simple majority vote. Taking direct aim at Senate Majority Leader Chuck Schumer, D-N.Y., McConnell on Tuesday painted a dire picture of what that future would look like if Republican senators and the voters they represent were cut out of the loop.
CONGRESS & COURTS・5 DAYS AGO
Washington Post

Senate Majority Leader Charles E. Schumer prepared Democrats on Wednesday for the final phase of a year-long push to pass voting rights legislation, sketching out legislative maneuvers that could launch debate on a pair of stalled bills and force a confrontation over the Senate’s rules in the coming days.
CONGRESS & COURTS・4 DAYS AGO
erienewsnow.com

Senate Majority Leader Chuck Schumer said Thursday evening the Senate will delay its scheduled January recess and take up voting legislation on Tuesday despite major obstacles that appear to have closed off a path for Democrats to achieve that ambition. "Make no mistake, the United States Senate will for the...
PRESIDENTIAL ELECTION・4 DAYS AGO
Star-Tribune

Schumer: Failure not an option on voting rights

Senate Majority Leader Chuck Schumer says "failure is not an option" when it comes to passing voting legislation. This comes as he set next Monday's Martin Luther King Jr. Day as a deadline to either pass the voting legislation or consider revising the rules around the chamber's filibuster blocking device.
CONGRESS & COURTS・5 DAYS AGO

Schumer: Senate to vote on filibuster change on voting bill

WASHINGTON (AP) - Days before the anniversary of the Jan. 6 attack on the Capitol, Majority Leader Chuck Schumer announced the Senate will vote soon on easing filibuster rules in an effort to advance stalled voting legislation that Democrats say is needed to protect America’s democracy. In a letter...
CONGRESS & COURTS・12 DAYS AGO
Washington Times

Senate Majority Leader Charles E. Schumer threatened Monday to gut the filibuster if Republicans don’t back the White House’s overhaul of the nation’s voting laws. Mr. Schumer, New York Democrat, wrote in a letter to colleagues that he would force a vote on changing the Senate’s longstanding rules by Jan. 17 unless GOP lawmakers help pass the partisan voting bill.
CONGRESS & COURTS・14 DAYS AGO
wibqam.com

WASHINGTON (Reuters) -Senate Democrats are continuing to press the holdouts in their party to embrace voting rights bills, and a group planned to meet with one of them, Senator Joe Manchin on Tuesday, Senate Majority Leader Chuck Schumer said. Senators have continued intensive discussions with Manchin and Senator Krysten Sinema...
CONGRESS & COURTS・13 DAYS AGO
MarketWatch

‘Severe struggle’ over federal debt limit and moves to impeach Biden: What could happen in a Republican Congress

Senate Republicans have spent months blocking a pair of voting rights bills from even getting a debate. Now, Senate Majority Leader Chuck Schumer, D-N.Y., has found a way around them — and the method is, quite frankly, beautifully clever. Last year, GOP senators filibustered starting debate on both the...
CONGRESS & COURTS・4 DAYS AGO
Newsweek

Representative Adriano Espaillat said "much must be done to push these two senators to line up and be in lock-step with our leadership."
CONGRESS & COURTS・1 DAY AGO
Newsweek

Representative John Katko, a New York Republican, announced on Friday that he would not seek another term this year.
POTUS・2 DAYS AGO
The Independent

Mitch McConnell has been been branded a hypocrite for posting a tribute to Martin Luther King Jr while leading Republican efforts to obstruct new voting-rights legislation.Mr McConnell was among several Republicans who took to social media to praise the late civil rights icon as the country marked Martin Luther King Day.“Nearly 60 years since the March on Washington, Dr. Martin Luther King Jr.’s message echoes as powerfully as it did that day,” the Senate minority leader wrote on social media. “His legacy inspires us to celebrate and keep building upon the remarkable progress our great nation has made toward becoming...
CONGRESS & COURTS・59 MINUTES AGO