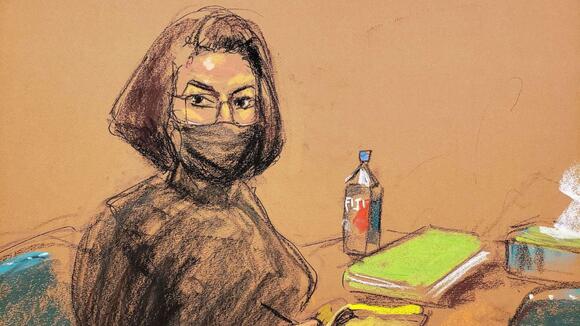 A key witness for the prosecution of Ghislaine Maxwell, identified only by her first name, Carolyn, delivered dramatic -- and sometimes tearful -- testimony on Tuesday.

Carolyn told the jury she was sexually abused for years by serial sex offender Jeffrey Epstein beginning when she was 14 years old and testified that when she first arrived at the home of Epstein's Palm Beach, Florida, estate, accompanied by a friend who promised her a way to make some extra money, it was "an older lady" with "an accent and shoulder-length hair" who greeted her at the door.

She couldn't pronounce the woman's first name, Carolyn said, so she just called her "Maxwell." The woman told Carolyn's friend to "bring her upstairs and show her what to do." Carolyn watched as her friend, Virginia Roberts, massaged Epstein for 45 minutes and then climbed on top of the table for sex. As the two girls left, Carolyn said, she gave her phone number to Maxwell and they were each paid hundreds of dollars. (Roberts, one of Maxwell's most prominent public accusers, is not expected to testify at her trial.)

Carolyn went back to Epstein's "hundreds of times" over the next several years, she said, and there was a sexual encounter each time. In the beginning, Carolyn said, Maxwell would call her to arrange the appointments, but in later years, she said, a different Epstein assistant contacted her or she called herself to try to set up an appointment.

On one occasion, Carolyn testified, Maxwell entered the massage room while Carolyn was fully nude. Maxwell touched her breasts, she said, and told her that she "had a great body for Mr. Epstein" who entered shortly thereafter. The money Carolyn received for the massages was usually left for her on a sink, but on one or two occasions, she said, Maxwell personally handed her $300.

Maxwell faces a six-count indictment for allegedly conspiring with and aiding Epstein in his sexual abuse of underage girls between 1994 and 2004. She has been held without bail since her arrest in July 2020 and has pleaded not guilty to the charges. She has denied all allegations.

Carolyn is identified in Maxwell's indictment as "Minor Victim-4." She was added to the government's case in February, seven months after the FBI arrested Maxwell at a remote estate in New Hampshire. Two of the criminal counts in the indictment, sex trafficking conspiracy and sex trafficking of a minor, are based on Carolyn's allegations.

She testified that Maxwell and Epstein both asked her to travel to his private estate in the U.S. Virgin Islands, but she said she told them her mother would never allow her to go, since she was only 15 years old.

During her testimony, Carolyn acknowledged that she became addicted to cocaine and sleeping pills and has twice been arrested for drug possession and possession of stolen property. Asked what she was doing with all the money she was making from her visits to Epstein's home, she said, emotionally, that she would "buy drugs." She also acknowledged that she recruited three other girls for Epstein, at his urging.

"He asked me if I had any friend my age or younger," Carolyn said, noting that she was 15 or 16 at the time.

During a lengthy cross-examination, Maxwell's attorneys repeatedly accused Carolyn of inconsistencies in the account she gave to the FBI in 2007 during its first investigation of Epstein and her testimony now and questioned why she failed to include Maxwell in prior civil lawsuits against Epstein, suggesting that she had a financial incentive to testify. In 2020, Carolyn submitted a claim to a compensation program funded by Epstein's estate and received an award of $2.8 million.

MORE: Inside Ghislaine Maxwell's 'house manual' for the management of Epstein's estate

But when prosecutor Maurene Comey, in a brisk and pointed redirect, asked whether Carolyn's testimony was motivated by money, she broke into tears.

"Money will not ever fix what that woman did to me," she said. "Because what she did was wrong."

During the closing moments Tuesday, Carolyn also said she was 13 when she first went to Epstein's house and when she met Maxwell, which conflicts with her testimony earlier in the day that she was 14.

The lawyer for the alleged Jeffrey Epstein victim suing Prince Andrew said they may depose Meghan Markle if the lawsuit goes to trial. In August, Virginia Guiffre filed a lawsuit against Prince Andrew, a longtime friend of Epstein, for alleged sexual assault when she was 17. Giuffre’s suit seeks unspecified compensatory and punitive damages. Prince Andrew’s legal team has a Jan. 4 motion to dismiss the lawsuit; if that is unsuccessful and the suit goes to trial, Guiffre’s lawyer David Boies told the Daily Beast that they might call Markle, the Duchess of Sussex, to the stand because of the “important knowledge”...
CELEBRITIES・25 DAYS AGO
enstarz.com

Prince Andrew's team saw some light after a 2009 settlement between Virginia Giuffre and Jeffrey Epstein emerged. Giuffre pulled Prince Andrew down when she alleged that Epstein trafficked and forced her to have lascivious activities with the late trafficker's friends, including the royal prince. She also claimed Prince Andrew knew she was only 17 at that time, but he has since denied her allegations.
POLITICS・12 DAYS AGO
The Independent

Donald Trump’s multiple comments sending Ghislaine Maxwell kind wishes after her arrest last year have been bubbling back up on social media, after a New York federal court jury found the British socialite guilty on Wednesday of five charges related to sex trafficking. But so far, the former president has been silent now that a conviction has been handed down.Last year, after her arrest in rural New Hampshire, the then-president had warm words for Maxwell, a fellow member of the New York and Florida social scene in the late ‘90s and early 2000s, a period during which Maxwell and...
PUBLIC SAFETY・17 DAYS AGO
portasouthjetty.com

The conviction of Ghislaine Maxwell on five of six charges of recruiting and grooming teenage girls for sexual encounters with disgraced financier Jeffrey Epstein is not and should not be the end of the story. While Maxwell has been held accountable for her actions, the men who engaged in these encounters with underage girls have not, at least not yet. […]
PUBLIC SAFETY・11 DAYS AGO

A woman who says she was raped by Jeffrey Epstein has told the BBC Ghislaine Maxwell was the "enforcer" in the sexual abuse that the pair carried out. Speaking to Andrea Catherwood on BBC Radio 4's Woman's Hour programme, Sarah Ransome described locking eyes with Maxwell in court. Maxwell, 60,...
PUBLIC SAFETY・16 DAYS AGO
WBAL Radio

(NEW YORK) -- The brother of Ghislaine Maxwell says that he denies any possibility that his sister is guilty of the sex trafficking crimes she was convicted of on Wednesday. Kevin Maxwell, in an American television exclusive, spoke to ABC News a day after a jury convicted his sister of conspiring with and aiding serial sex offender Jeffrey Epstein in his sexual abuse of underage girls.
PUBLIC SAFETY・16 DAYS AGO
epicstream.com

Prince Andrew reportedly doesn't want Prince Charles and Prince William to slim down the monarchy. Prince Andrew, the second son of Queen Elizabeth, has been avoiding the limelight for quite some time now, following his departure from royal duties in November 2019 in the wake of a scandal over his relationship with convicted s*x offender Jeffrey Epstein. The brother of Prince Charles, Princess Anne, and Prince Edward even skipped the traditional mid-morning walk to church and attending an earlier service with other members of the royal family last Christmas.
CELEBRITIES・8 DAYS AGO
103GBF

Ghislaine Maxwell and Jeffrey Epstein picked up at least one 14-year-old girl at this Michigan arts camp for teens. The Interlochen Center for the Arts is a non-profit, tax-exempt, art school and camp. Youth travel from all over the world to study music, dance film, and other audio and visual arts. The Interlochen Center is near the Northwest corner of Michigan's lower peninsula, kind of in the middle of nowhere, in the very small town of Interlochen. The population of this tiny Michigan town was estimated to be less than 600 residents according to the U.S. Census.
MICHIGAN STATE・14 DAYS AGO

Ghislaine Maxwell will no longer stand in the way of keeping the names of 8 'John Does' sealed in the Virginia Giuffre lawsuit, her attorney said.
NEW YORK CITY, NY・1 DAY AGO
Insider

The Justice Department has a clear path to release its investigation into how Jeffrey Epstein died in jail, more than 2 years after the financier's suicide

Two guards indicted for failing to watch over Epstein the night he died wrapped up their criminal cases in December, clearing the way for an IG report.
CONGRESS & COURTS・2 DAYS AGO
The Independent

Ghislaine Maxwell is no longer fighting to hide information – including eight names – from Virginia Giuffre’s lawsuit against her, her lawyers say.Lawyers for Ms Giuffre, who has accused Maxwell and Jeffrey Epstein of sexually abusing her, have long fought to unseal the names of eight “John Does” mentioned in their 2015 civil lawsuit. Maxwell’s attorneys pushed back, but on Thursday they appeared to give up the fight.“After careful review of the detailed objections submitted by Non-Party Does 17, 53, 54, 55, 73, 93, and 151, counsel for Ghislaine Maxwell writes to inform the Court that she does not wish to further address those objections,” one of Maxwell’s lawyers, Laura Menninger, wrote to Judge Loretta Preska on Wednesday.This is a breaking news story. More to follow
PUBLIC SAFETY・2 DAYS AGO
Shore News Network

Many of those connected with convicted sex offender Jeffrey Epstein remain silent in the face of questions after the trial of a close associate, with some entities not even responding to inquiries from the Daily Caller News Foundation. Ghislaine Maxwell, Epstein’s one-time girlfriend and associate, was convicted on five of...
POLITICS・10 DAYS AGO

NEW YORK — A $500,000 settlement in 2009 between Jeffrey Epstein and one of his victims, which Prince Andrew says shields him from lawsuits, was unsealed by a Manhattan federal judge Monday. The agreement between Epstein and Virginia Giuffre was revealed through ongoing litigation between her and the British...
MANHATTAN, NY・12 DAYS AGO
wutqfm.com

(NEW YORK) — A federal judge in New York has denied Prince Andrew’s motion to dismiss a lawsuit from Virginia Giuffre, an alleged victim of Jeffrey Epstein. This is a developing story. Please check back for updates. Copyright © 2022, ABC Audio. All rights reserved.
NEW YORK CITY, NY・4 DAYS AGO
enstarz.com

Prince Andrew's daughters appear to be unconcerned about the fate of their dad. As the controversial royal's life hangs by a thread, Beatrice and Eugenie are out and about, having fun. Some say they are living it up in an exclusive ski resort in Switzerland. Beatrice, 33, and Eugenie, 31,...
CELEBRITIES・11 DAYS AGO
Newsweek

The judge said rape happens when parents hold "parties for teenagers, and they allow coeds and female people to swim in their underwear in their swimming pool."
ADAMS COUNTY, IL・1 DAY AGO

Prince Andrew, the Duke of York, has lost his military titles and royal patronages just one day after his attempt to have a lawsuit dismissed from alleged Jeffrey Epstein victim Virginia Giuffre was denied. Buckingham Palace announced Thursday that Andrew's titles and patronages have been returned to his mother, Queen...
POLITICS・3 DAYS AGO
Los Angeles Times

Hostage-taker at Texas synagogue was a British national

The man who took four people hostage at a Texas synagogue is identified as a 44-year-old British national.
TEXAS STATE・9 MINUTES AGO
Entertainment Times

Anthony Figueroa, Virginia Roberts Giuffre’s boyfriend at the time when she filed a case against Prince Andrew, is breaking his silence after Ghislaine Maxwell was found guilty.
CELEBRITIES・11 DAYS AGO
checkyourfact.com

FACT CHECK: Did This Man Die In A Car Crash 2 Weeks After Claiming He Had An Affair With Barack Obama?

A video shared on Facebook purportedly shows a man who died two weeks after claiming that he had an affair with former President Barack Obama. The man was still alive as of December 2021. Fact Check:. The Facebook video appears to originate from a since-deleted TikTok video and shows a...
TRAFFIC ACCIDENTS・18 DAYS AGO