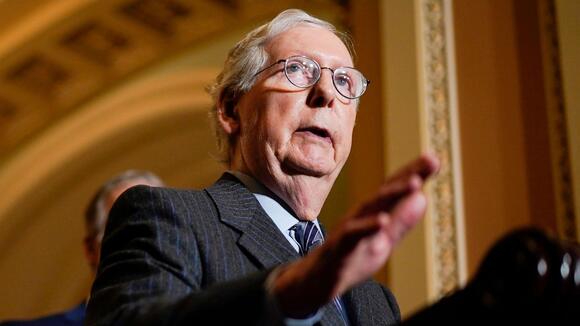 Congressional leaders on Tuesday announced a deal that would avert a default of the nation's credit by allowing Democrats to raise the debt ceiling in the Senate without any Republican support.

The U.S. is just days away from economic disaster, with the Treasury estimating the government will run out of money on Dec. 15, leaving the country unable to pay its bills.

Real-world consequences of the U.S. defaulting could include delays to Social Security payments and checks to service members, a suspension of veterans' benefits and rising interest rates on credit cards, car loans and mortgages.

The House approved the measure along party lines in a late-night 222-212 vote on Tuesday.

The legislation sets up a procedure that would allow the Senate to pass the final bill to raise the debt limit with a simple majority by suspending filibuster rules for a debt ceiling increase by a month.

Under this process, 10 Republican senators will still need to support the legislation setting up the agreement.

Senate Minority Leader Mitch McConnell seemed confident Tuesday that he had the votes locked in.

"I think this is in the best interest of the country to avoid default," McConnell told reporters Tuesday during a news conference.

"The red line is intact. The red line is that you have simple majority party line vote on the debt ceiling. That's exactly where we'll end up," he said.

McConnell and Senate Majority Leader Chuck Schumer spent weeks huddling behind closed doors to strike an agreement. The deal comes months after bitter partisan bickering over the matter, after Republicans insisted on Democrats raising the debt limit without any GOP support.

"Our number one goal to get this done -- get it done with just Democratic votes, without a convoluted, risky process -- is what we're on the verge of achieving," Schumer said.

The language regarding the debt ceiling process is attached to a separate provision that will avert impending Medicare cuts, which are set to take effect early next year.

"Once the Senate has passed the legislation lifting the debt limit, the House will take up that bill and send it to the President," House Speaker Nancy Pelosi announced in a letter addressed to colleagues Tuesday.

"Let us remember that addressing the debt limit is not about future spending. This is about meeting obligations that the government has already incurred, largely during the Trump Administration. Only three percent of the current debt has been accrued under President Biden," she said in the letter.

Black Lawmakers Fire Back at Mitch McConnell: 'We Are American'

Charles Booker, who is running for U.S. Senate in Kentucky, said he was "no less American than Mitch McConnell" and described him as a "craven man."
NEW YORK CITY, NY・1 DAY AGO
New Jersey Monitor

WASHINGTON — A bipartisan group of senators is exploring legislation to overhaul how Congress counts Electoral College votes, but backers of stalled voting rights legislation are lukewarm on the effort as a substitute. The Electoral Count Act is an obscure law that has come under recent scrutiny, a year after the Jan. 6 attack on […] The post With voting rights stalled, some senators mull an update to the Electoral Count Act appeared first on New Jersey Monitor.
PRESIDENTIAL ELECTION・1 DAY AGO
Newsweek

Democrats attempted to change the filibuster in order to pass voting rights legislation in the Senate this week.
CONGRESS & COURTS・1 DAY AGO
The Guardian

Republicans block voting rights protections from advancing – as it happened

WASHINGTON — Every Republican in the U.S. Senate and two Democrats on Wednesday night rejected a proposed change in the filibuster to pass voting rights legislation, dealing a major blow to attempts in Congress to counter restrictive voting laws passed in the states. In a 48-52 vote, two Democrats — Sens. Kyrsten Sinema of Arizona […] The post Sinema joins Republicans to block a change in the filibuster for voting rights bills appeared first on Arizona Mirror.
PRESIDENTIAL ELECTION・2 DAYS AGO
The Independent

Democrats were picking up the pieces Thursday following the collapse of their top-priority voting rights legislation, with some shifting their focus to a narrower bipartisan effort to repair laws Donald Trump exploited in his bid to overturn the 2020 election. Though their bid to dramatically rewrite U.S. election law failed during a high-stakes Senate floor showdown late Wednesday, Democrats insisted their brinksmanship has made the new effort possible, forcing Republicans to relent, even if just a little, and engage in bipartisan negotiations. The nascent push is focused on the Electoral Count Act, an 1887 law that created the convoluted...
PRESIDENTIAL ELECTION・2 DAYS AGO
Pennsylvania Capital-Star

Senate Majority Leader Chuck Schumer says Democrats "made progress" toward changing the Senate's filibuster rules to advance voting legislation, despite the dramatic collapse of the package that his party says is central to protecting democracy
CONGRESS & COURTS・2 DAYS AGO

The Freedom to Vote Act and the John Lewis Voting Rights Advancement Act are intended to counter gerrymandering and voting restrictions adopted in some states.
CONGRESS & COURTS・2 DAYS AGO
WATE

Despite failing to pass the voting rights legislation several times now, Democrats have vowed not to give up.
CONGRESS & COURTS・1 DAY AGO
The Guardian

This week, Senate Democrats are going to try — and fail — to get rid of the filibuster for voting rights legislation. They need all 50 senators in the Democratic caucus on board, and Sen. Kyrsten Sinema (D-Ariz.) and — to a slightly lesser degree — Sen. Joe Manchin III (D-W.Va.) are opposed to changing those rules.
CONGRESS & COURTS・4 DAYS AGO

Senate Democrats failed to change the rules of the filibuster in order to pass voting rights legislation.
CONGRESS & COURTS・2 DAYS AGO
Business Insider

A $1.8T Build Back Better compromise Manchin offered the White House in December is off the table. "We'll just start with a clean sheet of paper."
PRESIDENTIAL ELECTION・2 DAYS AGO
Newsweek

Pelosi defended congressional stock trading, stating that the U.S. is a "a free-market economy" and that lawmakers "should be able to participate in that."
POTUS・2 DAYS AGO
Newsweek

More than 120 House Republicans have signed a letter criticizing the decision to buy masks produced in China.
1 DAY AGO