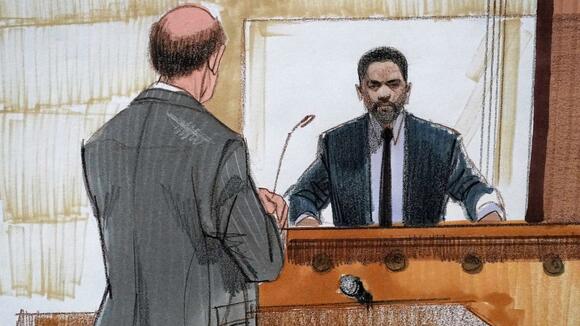 Nearly three years after prosecutors say Jussie Smollett staged a racist attack on himself, attorneys for the former "Empire" actor rested their defense on Tuesday in Chicago.

In January 2019, Smollett, who is Black and gay, alleged he was attacked by two men that were yelling racial and homophobic slurs at him and put a noose around his neck.

Prosecutors said his story came under scrutiny when investigators began to question the details and the actor declined to fully cooperate with the investigation.

According to prosecutors, the attackers were acquaintances of Smollett and he had given them $100 to buy supplies and $3,500 to carry out the attack.

Last week, the two men, Abimbola and Ola Osundairo, delivered damaging testimony against the actor and said he had orchestrated the entire attack, but Smollett took the stand on Monday in his own defense.

MORE: The Jussie Smollett trial: Timeline of how this case ended up in court

Smollett testified that the ordeal was not a hoax and called the Osundario brothers "liars."

He also said that the brothers had tried to extort $2 million from him to "go away," but during cross-examination he later said the brothers never directly contacted him for money.

Smollett, who pleaded not guilty, is charged with six counts of felony disorderly conduct for allegedly filing a false police report. Closing arguments are expected on Wednesday.

If convicted, he could be sentenced to up to three years in prison.

I’m Not Mad … I’m Disappointed in Jussie Smollett: On the Cultural Ramifications of a Staged Hate Crime

I rarely watch television. My demanding job is equivalent to a reality television show, so most evening broadcasts hardly entertain me. But there was a time on Bible Study Wednesdays that I did run home to watch a popular show that caught the nation’s imagination. It starred a new, unfamiliar actor whose character I found deeply engaging.
MUSIC・3 DAYS AGO
KDKA News Radio

Jussie Smollett to learn his fate March 10: what could happen

Jussie Smollett will be sentenced on March 10 after he was convicted in December for falsely reporting he was the victim of a racist and homophobic attack in 2019.
CELEBRITIES・3 DAYS AGO
BET

Jussie Smollett To Be Sentenced For Hate Crime Hoax In March

Actor Jussie Smollett will be sentenced for his hate crime hoax on March 10. According to Chicago Sun-Times, the update comes a month after Smollett was convicted on five of six counts of felony disorderly conduct, his defense attorney Tina Glandian confirms. A post-trial motions hearing is set for Thursday...
CHICAGO, IL・1 DAY AGO
Oxygen

Jussie Smollett, who was convicted last month for lying to police about a racist, homophobic attack that authorities said he staged, will return to court for sentencing March 10, a judge said Thursday. Cook County Judge James Linn set the sentencing date in Chicago for the former "Empire" actor, who...
CHICAGO, IL・9 HOURS AGO

Progressive lawmaker Rep. Cori Bush (D-MO) tore into Fox News on Thursday over a segment earlier in the day that she claimed was “advocating for me to face violence.”. Bush’s condemnation quoted New York Police Department Sgt. Joseph Imperatrice, who appeared on Fox News in the afternoon and said, “The harsh truth is we need these lawmakers to be victims” and “I’m not praying that any of these people get hurt or harmed, BUT…”
CONGRESS & COURTS・1 DAY AGO
92.7 The Block

Jennie Nguyen Fired From ‘The Real Housewives’ Over Anti-Black Texts

I’ve said it before and I’ll say it again: One does not need to be white to be racist. Now, if white people are reading this and saying, “Well, of course, white people face racism all the time”—calm down, guys, the above statement is about the anti-Blackness of non-Black people of color, not your fragile […]
CELEBRITIES・2 DAYS AGO
HuffingtonPost

Reacting to news that a progressive Democrat’s car was hit by gunfire, a New York police officer said during an appearance Thursdat on Fox News that “we need” lawmakers to be victims of crimes so they can “see firsthand how bad the streets really are.”. During...
NEW YORK CITY, NY・1 DAY AGO
Majic 94.5

The latest uphill legal battle for controversial hip-hop couple Nicki Minaj & Kenneth Petty now comes in the form of an assault allegation from a former security guard who claims Minaj berated him to the extent that it caused Petty to break his jaw with one punch.
CELEBRITIES・1 DAY AGO

One-time adult film actor Stormy Daniels told jurors Friday she had no choice but to hire now-disgraced attorney Michael Avenatti, because other lawyers "were just afraid" and she was "out of options." Daniels is testifying in a federal prosecution of Avenatti, 50, who is accused of stealing about $300,000 of...
CELEBRITIES・12 HOURS AGO
The Independent

Michael Avenatti has been granted permission to represent himself at his own trial in Manhattan, setting the stage for him to directly confront his former client Stormy Daniels if and when she takes the stand.As he left the courthouse on Tuesday, Avenatti said he felt comfortable representing himself. “I’m a trial lawyer. It’s what I’ve done for two decades. It’s my arena,” he said.Avenatti, a California lawyer, is accused of stealing $300,000 of the money Daniels was owed for her autobiography. He is also charged with wire fraud and aggravated identity theft.Avenatti became well known nationally in 2018 as he represented Daniels in lawsuits against Donald Trump. He was briefly something of a hero for many anti-Trumpers, but come 2020 he began a spectacular fall from grace that saw him sentenced to jail for trying to extort Nike out of millions of dollars.
CELEBRITIES・2 DAYS AGO
The Independent

Olivia Munn has spoken out after a virtual meeting of Asian-American creators was subject to a “cowardly and unconscionable” barrage of racist images.The meeting, which involved Munn and a number of other high-profile Asian-American industry creators, fell victim to “Zoom-bombing” – a term used to describe an unwanted intrusion of outsiders into a group video chat. On Instagram, the Newsroom star condemned the perpetrators.“Today while hosting a gathering of AAPI [Asian-American and Pacific Islanders] women and allies in a conversation about how to stop anti-Asian hate, we were targeted by a Zoom bombing of horrific, violent, racially charged images...
CELEBRITIES・2 DAYS AGO
The Independent

A Chicago man who spent nearly two decades in jail for murder was released on Wednesday after his identical twin brother confessed to the crime.Kevin Dugar, 44, who was released from Chicago’s Cook County jail, was convicted in 2003 in connection with the shooting of a rival gang member, reported the New York Post.In 2016, his twin brother Karl Smith had confessed to the crime in court and said that he had impersonated his brother and was responsible for the shooting.“We was acting as one,” Mr Smith was quoted as saying in court.“Where I was, he was, acting like each...
PUBLIC SAFETY・18 HOURS AGO

The Cash Money Records empire is about to get one of their originals back. The half-brother to Baby and Slim has been released from prison after getting hit with a life sentence. As spotted on Nola.com Terrance “Gangsta” Williams has been given a get out of jail free card. The periodical reports that their sibling was […]
CELEBRITIES・4 HOURS AGO
Business Insider

A Washington Post investigation found that Lahren's comments were consistent with those made by several other prominent police conference speakers.
PASADENA, CA・1 DAY AGO
CBS Chicago

CHICAGO (CBS) — Mayor Lori Lightfoot wiped away tears Wednesday while talking about the charges and circumstances surrounding the shooting that killed 8-year-old Melissa Ortega in Little Village this past weekend. Many at the news conference on the charges were calling for a renewed effort to combat violence involving children. It was also a rare appearance in the same room for Mayor Lightfoot, police Supt. David Brown, and Cook County State’s Attorney Kim Foxx. As CBS 2 Political Investigator Dana Kozlov reported, the question now is whether this means the officials have found common ground in the fight against crime – given...
CHICAGO, IL・2 DAYS AGO
Newsweek

Jussie Smollett, the former “Empire” actor who was convicted last month of staging a fake hate crime, is set to be sentenced on March 10, his attorney Tamara Walker confirmed to CNN on Tuesday. Smollett was found guilty in December on five counts of felony disorderly conduct for...
CHICAGO, IL・3 DAYS AGO
Fox 32 Chicago

Jussie Smollett to be sentenced in March

Smollett is expected to have a hearing this week before the sentencing on his fake hate crime conviction.
PUBLIC SAFETY・3 DAYS AGO
HipHopWired

Jennie Nguyen Fired From ‘The Real Housewives’ Over Anti-Black Texts

I’ve said it before and I’ll say it again: One does not need to be white to be racist. Now, if white people are reading this and saying, “Well, of course, white people face racism all the time”—calm down, guys, the above statement is about the anti-Blackness of non-Black people of color, not your fragile […]
CELEBRITIES・2 DAYS AGO