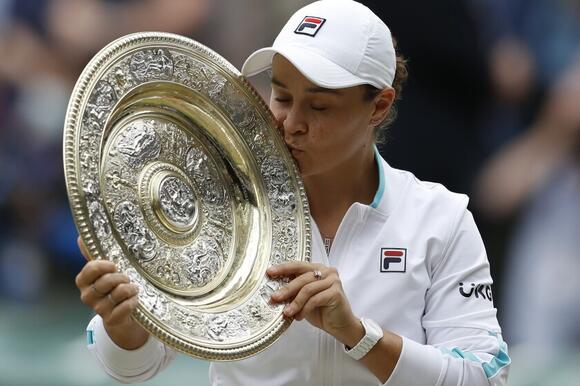 Ash Barty's Wimbledon title and hold on the No. 1 ranking helped her win WTA Player of the Year for the second time in voting results announced Tuesday.

Barbora Krejcikova was selected as Most Improved Player and shared the Doubles Team of the Year award with Katerina Siniakova. Krejcikova was the first woman since 2000 to win both the singles and doubles championships at the French Open.

Emma Raducanu was picked as Newcomer of the Year after winning the U.S. Open at age 18 and becoming the first player to go from qualifying rounds all the way to a Grand Slam title.

Carla Suárez Navarro is the Comeback Player of the Year after returning from Hodgkin’s Lymphoma to play on tour and represent Spain in the Billie Jean King Cup finals.

Barty also was the WTA Player of the Year in 2019. This season, she led the tour with five titles, including her second Grand Slam championship at the All England Club.

The 25-year-old Australian also finished at No. 1 in the year-end rankings for the third season in a row.

Krejcikova had never won a singles title before taking three in 2021, including at Roland Garros, and she rose from No. 65 at the end of 2020 to a high of No. 3 in the singles rankings.

Krejcikova and Siniakova were recognized as the Doubles Team of the Year for the second time, after 2018. They won the French Open, the WTA Finals and an Olympic gold medal together this year.

Naomi Osaka avoids stepping on the lines and the Melbourne logo at the Australian Open, she told reporters after her first-round match.
TENNIS・1 DAY AGO
The Independent

Emma Raducanu has been knocked out of the Australian Open after losing to Montenegro’s Danka Kovinic 4-6, 6-4, 3-6 in the second round at Melbourne Park. Just like her first-round match against Sloane Stephens, Raducanu started fast, rattling off three straight games before the momentum drastically turned. The Montenegrin hit back with five straight games of her own as Raducanu began to suffer from blisters to her right hand, requiring an early medical timeout. Kovinic capitalised on her momentum to close out the first set as the US Open champion was left to ponder her gameplan.To cope with the pain,...
SPORTS・1 DAY AGO
The Guardian

Australian Open 2022: Raducanu and Murray out, Medvedev beats Kyrgios – as it happened

When asked whether Novak Djokovic should be allowed to play at the Australian open, Naomi Osaka replied, "Is my opinion going to help anything?"
TENNIS・2 DAYS AGO
The Independent

Andy Murray and Emma Raducanu both exited the Australian Open on a disappointing day for British players in Melbourne.Murray was bitterly frustrated by his performance against qualifier Taro Daniel while a blister on her hand hampered Raducanu against Danka Kovinic. Heather Watson also lost but Dan Evans was given a free passage through to round three when Arthur Rinderknech withdrew.Daniil Medvedev held off Nick Kyrgios in the big match of the day while top women’s seeds Garbine Muguruza and Anett Kontaveit both went out.Picture of the dayQuote of the dayMaking second round of slams is not something I find particularly...
TENNIS・1 DAY AGO
The Independent

If the top half of the Australian Open draw could be accused of lacking notable drama so far, Naomi Osaka ensured she at least provided some fireworks. The big names playing on day three in Melbourne all progressed without much difficulty on Wednesday, and while the start of the second round saw few shocks, it means a meeting between defending champion Osaka and tournament favourite Ashleigh Barty remains alive. Osaka served a reminder of why that promises to be a tantalising last-16 match with a spectacular first-set performance in her win over Madison Brengle, before having to dig deep and...
TENNIS・2 DAYS AGO
Insider

"I feel like a veteran at this point on tour," Naomi Osaka said at the Australian Open. "There are so many kids that are born in the 2000s."
TENNIS・1 DAY AGO

Garbine Muguruza was among several seeds to fall on a day of shocks at the Australian Open on Thursday ahead of men's title favourite Daniil Medvedev and Nick Kyrgios squaring off in a blockbuster encounter. In the men's draw, Australian wildcard Chris O'Connell continued the day of upsets with a straight-sets win over 13th seed Diego Schwartzman of Argentina 7-6 (8/6), 6-4, 6-4.
TENNIS・1 DAY AGO
Insider

"It was really cool just to have someone like him talking about my game," Naomi Osaka said of Andy Murray during her post-match press conference.
TENNIS・2 DAYS AGO
The Independent

Sloane Stephens appeared to question Emma Raducanu’s on-court behaviour and said the 19-year-old “still has a lot to learn” after the pair’s first-round match at the Australian Open. Raducanu emerged victorious after a volatile match in which she blitzed the first set in just 17 minutes before being broken three times on her own serve in the second. However, as the momentum threatened to turn against her, Raducanu recovered brilliantly to dominate the deciding set.Speaking to the media after the match, though, Stephens seemed to suggest that some of Raducanu’s behaviour had been a little theatrical. “Everyone saw after the...
TENNIS・2 DAYS AGO
Insider

Fans in the crowd at the Rod Laver Arena were imitating Cristiano Ronaldo's "SIUUU" celebration, which Medvedev mistook for boos.
TENNIS・1 DAY AGO

Title favourite Daniil Medvedev and Nick Kyrgios will square off on Thursday in a blockbuster second-round encounter that could play a big part in shaping the destiny of this year's Australian Open men's singles title. He's going to try to pump himself up, like, he likes to play big names," said Medvedev, who will take on Kyrgios in the prime-time evening match on centre court, Rod Laver Arena.
TENNIS・1 DAY AGO
Insider

With a serve that can reach up to 125 mph and forehands can register three figures on the radar, Naomi Osaka is one women's tennis' hardest hitters.
TENNIS・1 DAY AGO
The Independent

Sports stars and clubs across the world continue to provide an insight into their lives on social media.Here, the PA news agency looks at some of the best examples from January 19.TennisAndy Murray served Naomi Osaka a compliment. And she returned it.Anyone put their heart on their sleeve and fight harder than @andy_murray ? 🥺🙏🏾🔥 https://t.co/c6G2SA2Ycx— NaomiOsaka大坂なおみ (@naomiosaka) January 19, 2022Osaka was feeling arty.Lol omg 😂💀 https://t.co/SeYxBn0avu— NaomiOsaka大坂なおみ (@naomiosaka) January 19, 2022Serena had a battle on her hands.[xdelx]Denis Shapovalov struggled with a banana!Sometimes the struggle is real 😅 Sorry, @denis_shapo 🍌#AusOpen • #AO2022• #AOTennis pic.twitter.com/NYtCJkQYss— #AusOpen (@AustralianOpen) January 19, 2022Madison...
TENNIS・2 DAYS AGO
The Independent

Australian Open 2022: Order of play for day four with Andy Murray and Emma Raducanu in action

Andy Murray and Emma Raducanu will look to book their places in the third round of the Australian Open after surviving epic matches in the opening round in Melbourne. Murray prevailed in five sets against Nikoloz Basilashvili on his first Australian Open appearance in three years before Raducanu triumphed in a meeting of US Open champions against Sloane Stephens on her tournament debut. Both players have been handed primetime matches in the night sessions in Melbourne Park, with Murray taking on Japan’s Taro Daniel in the final match on the John Cain Arena and Raducanu facing Danka Kovinic on...
TENNIS・2 DAYS AGO

Follow all the action as the second round of the Australian Open gets underway on the third day of the tournament in Melbourne. Tournament favourite Ashleigh Barty took just 52 minutes to storm to another emphatic victory, this time a 6-1 6-1 victory over Italian qualifier Lucia Bronzetti, to reach the third round. The women’s number one seed required even less time than the 54 minutes she needed for her round one win against Lesia Tsurenko on Monday as the Australian cruised through. Rafael Nadal also stormed to a dominant 6-2 6-3 6-4 victory over German qualifier Yannick Hanfmann...
TENNIS・2 DAYS AGO
The Independent

Rafael Nadal is confident he is on the right path after moving smoothly into the third round of the Australian Open.German qualifier Yannick Hanfmann put up a good fight on Rod Laver Arena including saving four match points, but sixth seed Nadal took his fifth chance to clinch a 6-2 6-3 6-4 victory after two hours and 42 minutes.“I think he played great tennis out there, playing very aggressive, big shots,” said Nadal. “It wasn’t an easy game at all.”Nadal is unbeaten so far this season having cut short his 2021 campaign in August because of a foot problem....
TENNIS・2 DAYS AGO
The Independent

It was hard to know where to look at times on a day four of the Australian Open that seemed to have it all. It ended with both Emma Raducanu and Andy Murray bowing out at the second round stage, with one showing admirable fight and spirit to rage against an early exit and the other questioning whether they still had enough to go on. While Raducanu’s first grand slam since her remarkable US Open triumph is over earlier than many would have expected, it does not tell the full story of a wild evening in Melbourne in which she...
TENNIS・1 DAY AGO
San Diego Union-Tribune