The House of Representatives passed a bill Tuesday night that contains a provision that will allow the Senate to pass a debt ceiling hike with only Democratic votes.

In a vote of 222 to 212, the House passed a bill that delays Medicare sequestration cuts for three months, which had rules to increase the debt ceiling tucked inside.

Only one Republican, retiring GOP Rep. Adam Kinzinger, voted alongside the Democratic majority.

The rule will allow lawmakers to avert the crisis with a simple 51-vote majority in the upper chamber before the estimated December 15 deadline.

Crucially, Mitch McConnell, the leader of the Republicans in the Senate, is backing the process.

'I think this is in the best interest of the country, by avoiding default,' he told reporters when questioned about the convoluted approach.

Still, Republicans on the House floor slammed the move.

'You wrecked a bipartisan agreement for your debt ceiling crisis,' Brady said. 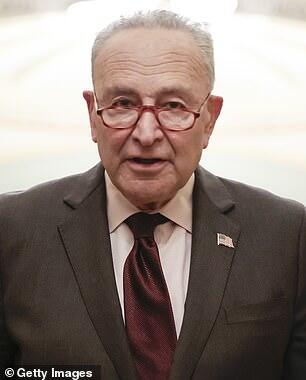 Senate Majority Leader Chuck Schumer repeated a warning about what could happen if lawmakers went over the financial cliff.

'Nobody wants to see the US default on its debts. As Secretary Yellen has warned, a default could eviscerate everything we've done to recover from the COVID crisis,' Schumer said on the floor Tuesday.

'We don't want to see that, I don't believe we will see that, and I continue to thank all my colleagues for cooperating in good faith to preserve the full faith and credit of the United States.'

The U.S. spends more money than it collects through taxation so it borrows money via the issuing of government bonds, seen as among the world's most reliable investments.

Around 80 years ago lawmakers introduced a limit on how much federal debt could be accrued.

The ceiling has been lifted dozens of times to allow the government to meet its spending commitments - usually without drama and with the support of both parties - and stands at around $29 trillion.

The Bipartisan Policy Center said last week it expected the United States would no longer be able to meet its debt repayment obligations between December 21 and January 28.

Treasury Secretary Janet Yellen has put deadline even earlier, saying it would happen on December 15.

Yellen and other Democratic leaders have spent weeks underlining the havoc that a default would have wrought, including the loss of an estimated six million jobs and $15 trillion in household wealth, as well as increased costs for mortgages and other borrowing.

But Republicans in both chambers of Congress were initially objecting to helping raise the limit this time around, saying they refused to support President Joe Biden's 'reckless' taxing and spending plans.

In reality, both parties see raising the borrowing cap as politically toxic, and Republicans hope to weaponize the issue in the 2022 midterm election campaign.

Under the complex, multi-step compromise proposed Tuesday, the Republicans can essentially stand on the sidelines, offering help to create the new law but offering no votes to increase the limit.

They'll do that in the Senate by joining Democrats in a procedural vote - to ensure there are 60 votes to override a GOP filibuster - then only Democrats are expected to vote on the final bill.

Congress would have to specify the exact dollar amount of a new borrowing cap - likely upwards of $30 trillion.

Both chambers would have to approve the new process first, and then the Senate, followed by the House, would pass the extension by simple majority votes.

Representative Adriano Espaillat said "much must be done to push these two senators to line up and be in lock-step with our leadership."
CONGRESS & COURTS・1 DAY AGO
Newsweek

"If we do not protect the vote with everything that we've got, we will not have a country to protect going forward," the House majority whip said Sunday.
CONGRESS & COURTS・21 HOURS AGO
Wisconsin Examiner

Senate filibuster on voting rights criticized by advocates for the poor

WASHINGTON — Progressive lawmakers Friday joined a virtual news conference with organizers from the Poor People’s Campaign and said they are not giving up on the push to change Senate rules to pass voting rights legislation. The Poor People’s Campaign: A National Call for Moral Revival held the virtual meeting to kick off its plans […] The post Senate filibuster on voting rights criticized by advocates for the poor appeared first on Wisconsin Examiner.
CONGRESS & COURTS・7 HOURS AGO
The Independent

It was a brutal week for the Democratic Party’s various factions as it became clear ahead of Martin Luther King Jr Day that the passage of voting rights legislation remains unlikely thanks to two Democratic senators, Joe Manchin and Kyrsten Sinema.As the president descended on Capitol Hill in an attempt to press the two on their resistance to alterations to the Senate’s filibuster rule, Ms Sinema took to the floor and delivered a speech outlining her continued refusal to make any changes to the rule even as unified Republican opposition means that passing legislation to combat gerrymandering and bills to...
CONGRESS & COURTS・50 MINUTES AGO

The House of Representatives will vote on election reform legislation that combines previous versions written up in the House and Senate on Thursday, Speaker Nancy Pelosi told colleagues in a letter last night. On Thursday afternoon President Joe Biden is heading to the United States Capitol to convince all 50...
U.S. POLITICS・4 DAYS AGO
Business Insider

"I have known, liked, and personally respected Joe Biden for many years. I did not recognize the man at that podium yesterday," McConnell said.
PRESIDENTIAL ELECTION・4 DAYS AGO
FOX40

The House already passed voting rights legislation last year, only to be stymied by a GOP filibuster in the evenly divided 50-50 Senate.
CONGRESS & COURTS・4 DAYS AGO
WTKR News 3

Senate Democrats aim to launch debate on voting rights legislation, even though there's no assurance the bill will come to a vote.
PRESIDENTIAL ELECTION・4 DAYS AGO

Senate Democrats are trying to force a public showdown over their sweeping elections legislation, aiming to launch debate on a key party priority even though there’s no assurance the bill will come to a vote. Majority Leader Chuck Schumer outlined the plan in a memo obtained Wednesday by The Associated Press, on the eve of […]
PRESIDENTIAL ELECTION・4 DAYS AGO
tucson.com

The U.S. House of Representatives on Thursday voted along party lines to approve legislation designed to allow the Senate Democrats to begin debate on a package of voting rights and election reforms that could lead on a path to change the 60-vote filibuster rule. The House on Thursday amended an unrelated bill that had already approved both chambers of Congress, combining Democrats two separate voting bills into one. The legislation passed in the House with a 220-203 party-line vote to approve the bill. Democrats combined the John Lewis Voting Rights Act and the Freedom to Vote Act into a single text and placed it into previously passed legislation extending NASA's authority to lease its facilities.
CONGRESS & COURTS・3 DAYS AGO
hngn.com

Joe Biden asked senators Tuesday, pounding his palm for emphasis, to fight against voter suppression by amending Senate rules to approve voting rights legislation that Republicans are stalling from debate and vote. In a speech aimed at reviving the struggle to enact federal voting rules and persuading skeptic Democrats of...
PRESIDENTIAL ELECTION・4 DAYS AGO
Daily Mail

Two can play that game: Republicans threaten takeover of Senate floor with votes on Keystone XL pipeline, abortion and the border if Dems kill filibuster to push through voting rights legislation

Senate Republicans are threatening to force votes on a slew of bills designed to split the Democratic caucus and take over the floor agenda should Majority Leader Charles Schumer carry out his threat to push through a change in Senate filibuster rules for voting rights. Senate Minority Leader Mitch McConnell,...
PRESIDENTIAL ELECTION・6 DAYS AGO

The House of Representatives voted along party lines Thursday to approve a bill that will serve as a vehicle for Senate Democrats to start debate on sweeping election reform measures — and potentially lead to a doomed bid to alter or eliminate the 60-vote legislative filibuster. Democrats merged the...
PRESIDENTIAL ELECTION・4 DAYS AGO
wibqam.com

WASHINGTON (Reuters) – A Democratic bill intended to protect voting rights passed the U.S. House of Representatives on Thursday, though its chances were unclear in the narrowly divided Senate, where Republicans are unified in opposition. The bill is a maneuver by Democrats in which the House repackaged and passed...
CONGRESS & COURTS・4 DAYS AGO
wnynewsnow.com

WASHINGTON, D.C. – Democrats and the Congressional Black Caucus are putting pressure on the senate to vote on legislation they say will protect voting rights. This follows President Biden’s visit to Georgia where he advocated for congress to pass these bills. But Republicans have been adamant that we should leave it to the states to decide their election laws.
CONGRESS & COURTS・4 DAYS AGO
blogforarizona.net

On the anniversary of the January 6, 2021 MAGA/QAnon violent insurrection on the U.S. Capitol, over 150 national and local pro-democracy organizations released a letter demanding that Senate Majority Leader Chuck Schumer change the Senate rules in order to reform the filibuster and pass voting rights legislation. , guys, you...
CONGRESS & COURTS・10 DAYS AGO
WEHT/WTVW

Democrats say their top priority this new year is passing national voting legislation. With Republicans still united against the effort, they say they will now attempt to pass their bills alone.
CONGRESS & COURTS・12 DAYS AGO
Newsweek

"I think anyone with common sense would be reluctant to go talk to this committee," the GOP congressman said.
CONGRESS & COURTS・22 HOURS AGO
Fox News

Biden 'disrespecting Americans' by claiming they're racist 'if he doesn't get his way': Sen. Lee

President Joe Biden is the embodiment of a historic "low point" in the presidency of the United States, as he accuses his fellow Americans of being racist simply because they disagree with his partisan policies, Senate Judiciary Committee member Mike Lee, R-Utah, said. Lee joined "The Mark Levin Show on...
CONGRESS & COURTS・2 DAYS AGO