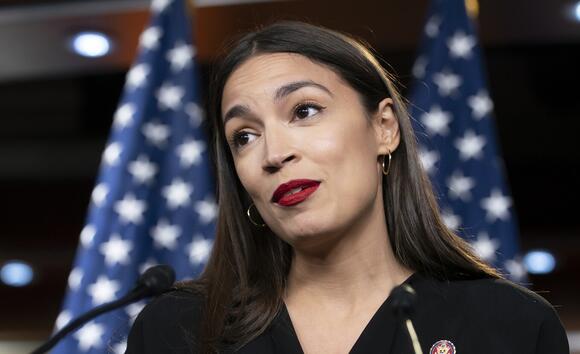 R ep. Alexandria Ocasio-Cortez called on Senate Democratic leaders on Tuesday to override the parliamentarian and include a pathway to citizenship in President Joe Biden’s $1.75 trillion Build Back Better legislation.

In remarks to immigration activists outside the Capitol on Tuesday, the New York Democrat, speaking in both Spanish and English, said, “This is our moment.”

“We do have a possibility,” she said. “Don’t let anyone tell you that the moment has gone, that the possibility has gone away, that the opportunity is not here, because that is not true.”

The Senate parliamentarian has thus far blocked Senate Democrats' efforts to include providing a path to citizenship for undocumented immigrants as ineligible in a reconciliation bill since it is not a budgetary matter. But Ocasio-Cortez said this should not be an obstacle for Senate Democrats.

“Our demand is for the Senate to override the parliamentarian, include a full path to citizenship, and send it back to the House," Ocasio-Cortez said.

Ocasio-Cortez voted for the House-passed version of the bill but argued that House Democrats would vote for stronger immigration provisions if it were sent back to them. She said that since Democrats “have a trifecta” — control of the House, Senate, and White House — they have no excuse not to pass these provisions.

The push from immigration activists and some liberal House Democrats comes as the Senate Democratic leadership seeks to pass the legislation by Christmas. They have yet to ensure the support of centrist West Virginia Democrat Sen. Joe Manchin, who opposes certain provisions in the bill and whose vote would be crucial to its passage, since no Republicans are expected to support the Build Back Better Act.

In an effort to try and win Manchin’s opposition, Senate Republicans have said the bill would make rising inflation worse. A group of Republican senators held a press conference at the Capitol on Tuesday to highlight what they called job-killing tax hikes in the bill.

Oklahoma Sen. James Lankford said, “It’s interesting to me the number of times that I hear the story change as this bill moves through the House and now comes over to the Senate.”

“Originally, it was all about sustaining our economy," Lankford said. "Then, this very hot inflation continues to rise, and now, suddenly, it is, ‘Well, this is going to help us fight inflation.’ And now we’re dealing with unemployment issues, and now the Democrats’ line changed to, ‘Well, now it’s going to help us with employment issues.’ In reality, what’s happening is, they’re trying to spend more, they’re trying to tax more, and they’re going to make a bad situation even worse in this process.”

“It’s going to be very detrimental, these tax provisions in this wild-eyed, tax-and-spending spree bill that could come before us,” Grassley said.

If you came here illegally you don't get a path to anything but back to your native country. We are a nation of laws we don't reward criminal behavior!

there is a path to citizenship. been there for years. we have a system to become a citizen. millions of people have done it and we welcome them. it's not come over the border illegally and say ok I am here now make me a citizen.

Confirming that this Administration sees the illegal aliens flooding the southern border as VOTERS, and thats exactly why they will do nothing about it.

Following a report that Supreme Court Justice Stephen Breyer will retire at the end of the court’s term, Democrats and liberal activists were quick to remind President Joe Biden of his campaign pledge to nominate a black woman to the high court for the first time in the nation’s history.
PRESIDENTIAL ELECTION・13 HOURS AGO
WashingtonExaminer

The White House chose not to comment directly on Supreme Court Justice Stephen Breyer's plans to retire but said President Joe Biden stands by his 2020 campaign promise to nominate a black woman to sit on the nation's highest court if given the chance.
PRESIDENTIAL ELECTION・12 HOURS AGO
Business Insider

"If all Democrats hang together ... they have the power to replace Justice Breyer in 2022 without one Republican vote in support," Graham said.
CONGRESS & COURTS・13 HOURS AGO

Unpacking some of the wildest theories of what the Biden White House may do with the looming Supreme Court vacancy. What happened: This happens almost every time there's a vacancy atop the nation's highest court, but let's walk through why some of the wildest ideas about the Supreme Court vacancy almost without a doubt won't happen.
CONGRESS & COURTS・12 HOURS AGO
The Independent

Supreme Court Justice Stephen Breyer’s impending retirement gives PresidentJoe Biden one of the most prized opportunities any president has: a chance to nominate a Supreme Court justice who will likely serve long after he has left the White House.But given that Democrats have only a 50-seat majority with Vice President Kamala Harris as the tiebreaker, many of them are probably already dreading how conservative Democratic Sens Joe Manchin of West Virginia and Kyrsten Sinema of Arizona would vote.Democrats especially can’t be too optimistic after Mr Manchin effectively killed Mr Biden’s proposed Build Back Better bill, while Ms Sinema opposed...
PRESIDENTIAL ELECTION・10 HOURS AGO
Newsweek

Eyes will be on the two moderate Democrats, who have opposed some of Biden's key legislative priorities and will be needed to confirm his Supreme Court nominee.
PRESIDENTIAL ELECTION・12 HOURS AGO

"Nearly 10 million children will be thrown back into or deeper into poverty this winter" if the child tax credit isn't renewed, the letter says.
PRESIDENTIAL ELECTION・21 HOURS AGO
Markets Insider

It's been 8 months since the Education Department wrote a memo on Biden's legal ability to cancel student debt. Democrats say it's time to release it.
U.S. POLITICS・15 HOURS AGO
USA TODAY

A simple majority is all that’s needed to approve a presidential nomination to the country’s highest court.
CONGRESS & COURTS・13 HOURS AGO
Business Insider

Manchin remains peeved over a White House statement that singled him out, The Washington Post reported.
CONGRESS & COURTS・1 DAY AGO

Senate Democrats who have played defense for the last three Supreme Court vacancies plan to move swiftly to replace retiring Supreme Court Justice Stephen Breyer using the rapid 2020 confirmation of Justice Amy Coney Barrett as a new standard. Barrett was confirmed exactly a month after then-President Donald Trump nominated her to replace the late Justice Ruth Bader Ginsburg — and just five weeks after Ginsburg’s death in September of that year. Democrats sharply criticized that timeline then, arguing that most confirmations had taken much longer and that Republicans were trying to jam the nomination through in case...
PRESIDENTIAL ELECTION・13 HOURS AGO
Newsweek

A past Sinema donor said, "I have given up really trying to understand Sinema's motivations for the way she votes."
CONGRESS & COURTS・11 HOURS AGO
The Independent

House Speaker Nancy Pelosi has announced her intention to run for re-election, extending a career in the House of Representatives spanning more than three decades, ahead of a midterm election battle that could determine the balance of power in Congress.The California congresswoman – who is serving her 17th term in the House, and fourth term as speaker – made the announcement on her campaign’s social media channels on 25 January.While we have made progress much more needs to be done to improve people’s lives. This election is crucial: nothing less is at stake than our Democracy.But we don’t agonize-we...
PRESIDENTIAL ELECTION・1 DAY AGO
Business Insider

Democrats are returning their attention to Biden's big spending bill after Manchin torpedoed it a month ago.
CONGRESS & COURTS・16 HOURS AGO

'Who is saying it's not paid for?': White House waves away spending bill worries

The White House continued to insist Wednesday that a revived social welfare spending bill is fully paid for.
POTUS・11 HOURS AGO
WashingtonExaminer

Just one month after its apparent death at the hands of Sen. Joe Manchin, the Build Back Better agenda is again being promoted by Democrats, even with few details available for what will actually be in it.
POTUS・9 HOURS AGO
WashingtonExaminer