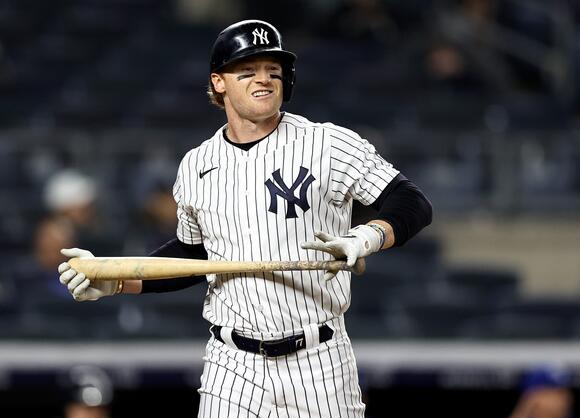 Perhaps it’s for the best that the Yankees have parted ways with Clint Frazier?

The former Yankee turned Cub took to Twitter for the first time in six weeks – minus a random reply to one of Jameson Taillon’s tweets last week – to express his pleasure for how a mockup of him in a Cubs uniform looked…and of course took a veiled shot at the Yankees’ hair policy:

All in good fun, perhaps, but then Clint also doubled down in a reply, saying he’ll continue to wear No. 77 after asking for No. 7…for the first time ever:

Technically, Frazier was right, as Jose Lobaton wore No. 7 for his epic six-game run on the North Side last year, but of course, that was another shot at the rumor that he asked for No. 7 as a Yankee not knowing it was retired for Mickey Mantle.

Frazier’s last tweet, on Oct. 28, made a joke about PETA’s proposal for baseball to change the name of the bullpen to the arm barn, but the one before that, on Oct. 11, was a quote tweet about how he would love the chance to address his battle with head injuries and clear up rumors and misinformation.

BOSTON (CBS) — It wouldn’t be Hall of Fame season if a member of the baseball media wasn’t twisting himself into a pretzel for all the world to see. Enter Jack Curry of the Yankees’ broadcast network. Curry revealed his ballot on Tuesday, which is the day that the Baseball Hall of Fame will announce which players — if any — will earn enshrinement this year. Curry used eight of his allowable 10 votes this year, and for the first time in their 10 years of eligibility, Barry Bonds and Roger Clemens received his vote. The reason Curry hadn’t voted for Bonds and...
MLB・2 DAYS AGO
The Staten Island Advance

The Yankees will have a lot of work to do the moment the lockout if lifted. General manager Brian Cashman likely already has a few buttons he’s just about ready to press once business gets going again. While the game has been paused, the Yankees’ front office has remained hard at work.
MLB・10 HOURS AGO
The Staten Island Advance

Brian Cashman has a decision to make after the MLB lockout ends: Who will play shortstop for the New York Yankees in 2022?. The general manger could go all-in on one of the top remaining free-agent shortstops, but both Carlos Correa and Trevor Story are looking for hefty, nine-figure contracts.
MLB・2 DAYS AGO
FanSided

The last thing any Yankees fan wants to hear is increased buzz about another stopgap shortstop with a significant flaw, but that’s exactly what we’ve been gifted this week. Even better news? The shortstop is aging, he’s got a semi-prohibitive contract, and his calling card is his glove,...
MLB・16 HOURS AGO

Braves-Matt Olson rumors are real and could derail Yankees offseason

We can dance around things as much as we might want, but after thousands of permutations, the only two ways the Yankees can have a truly successful offseason are:. Yankees trade for Matt Olson or sign Freddie Freeman. The shortstop conundrum seems to have already been somewhat sorted. Correa has...
MLB・1 DAY AGO
Audacy

Barry Bonds, Roger Clemens and Sammy Sosa all failed to make the Hall of Fame in the final year of eligibility, which led to a lot of passionate reactions across social media.
MLB・2 DAYS AGO
CBS Boston

BOSTON (CBS) — While David Ortiz got his call to the National Baseball Hall of Fame on Tuesday, four polarizing and controversial players in baseball history did not. For Roger Clemens, Barry Bonds, Curt Schilling and Sammy Sosa, Tuesday was their last chance to make it to Cooperstown by way of traditional voting. All four fell short of getting the required 75 percent of votes in their tenth and final season on the ballot, with Bonds getting 66 percent, Clemens 65.2 percent, Schilling 58.6 percent and Sosa just 18.5 percent. Those four will no longer appear on the BBWAA ballot, so...
MLB・2 DAYS AGO
Audacy

MLB Network’s Rob Parker did not vote for David Ortiz citing a gray area with PEDs, but he voted for Barry Bonds, Roger Clemens and Sammy Sosa, leading to one of his colleagues to call him out.
MLB・2 DAYS AGO

Alex Rodriguez, a three-time MVP whose 696 home runs trail only Barry Bonds, Hank Aaron and Babe Ruth, received just 34.3% of the votes in his debut.
MLB・2 DAYS AGO
CBS Boston

BOSTON (CBS) — David Ortiz got a very important phone call on Tuesday night, letting him know that he is now a Baseball Hall of Famer. Big Papi was pretty pumped to receive that call. Ortiz was in the Dominican Republic surrounded by family and friends — including former Boston teammate and fellow Hall of Famer Pedro Martinez — when he received the news from Jack O’Connell of the BBWAA. “I’m calling you from Cooperstown, New York to let you know that the baseball writers have elected you to the National Baseball Hall of Fame,” O’Connell told Ortiz. With that, Ortiz threw his...
MLB・2 DAYS AGO
WEEI Sports Radio

David Ortiz was voted into the Baseball Hall of Fame Tuesday, while Barry Bonds and Roger Clemens were shut out. That’s total insanity. They should all be in.
MLB・1 DAY AGO
USA TODAY

"You can make a case that he's the best player to ever play," Jim Leyland said of Barry Bonds, whom he managed with the Pittsburgh Pirates.
MLB・1 DAY AGO

The 2021 season was one heck of a roller coaster for Max Muncy. The slugging first baseman carried the Dodgers in the first half with his bat, which resulted in him being in early MVP conversations.  But that first half was short-lived as Muncy came tumbling back to earth in the second half, ...
MLB・1 DAY AGO
92.9 The Game

Will the Atlanta Braves be able to sign Freddie Freeman? Will Major League Baseball play 162 games this year? What is the big hold up in the MLB negotiations?
MLB・2 DAYS AGO
Sports Illustrated

The two sides met on Tuesday, marking the second consecutive day of discussions between the parties.
MLB・2 DAYS AGO
iheart.com

Ronnie & TKras w/ Zac Blobner This Morning: The Bucs have a lot on their plate to deal with, despite being out of the NFL Playoffs after losing to the Rams last Sunday. From Tom Brady on Instagram saying "Thank You", to OC Byron Leftwich unofficially heading to Jacksonville to coach the Jags, to Antonio Brown going on HBO and threatening to sue the team... it's, A LOT. Bucs Radio Voice Dave Moore & Pewter Report's Jon Ledyard help us break it all down, oh AND Saints HC Sean Payton stepping away from New Orleans in there too. Plus, the Bolts back home vs the Devils tomorrow, as Bally Sports Lightning TV Voice Dave Randorf calls the show w/ a bone to pick about Jon Cooper getting shafted by the NHL. Zac handles What's Up Tampa Bay w/ Wacky Turtle News & a game of Would You Rather on the MLB Hall of Fame ONLY inducting Red Sox Legend David Ortiz while shelving Barry Bonds' chances for the final time...
NFL・1 DAY AGO
Audacy

Barry Bonds, Roger Clemens, Todd Helton, David Ortiz, Andy Pettitte, Manny Ramirez, Alex Rodriguez, Scott Rolen, Curt Schilling, Sammy Sosa — My ballot for the National Baseball Hall of Fame Class of 2022. The Hall of Fame is now right where it wanted to be in 2014, when it changed the eligibility for players on the writer’s ballot from 15 years to 10. Barry Bonds, Roger Clemens and Sammy Sosa, stars of Major League Baseball’s so-called steroid era, are now off the Baseball Writers of America Association ballot five years before they otherwise would have been. For the 10th consecutive year, the...
MLB・2 DAYS AGO
The Blade

Jim Leyland has never been one to mince words or withhold opinions, and the Perrysburg native and former big league manager on Wednesday was predictably critical of the decision to keep Barry Bonds out of the National Baseball Hall of Fame.
MLB・1 DAY AGO
USA TODAY

David Ortiz needed just one swing to power his way into baseball’s Hall of Fame, narrowly punching his ticket to Cooperstown.
MLB・2 DAYS AGO