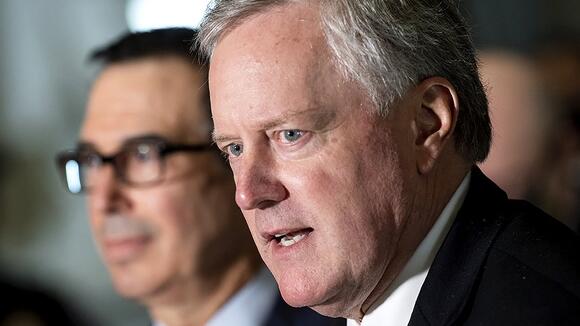 The leaders of the select committee investigating the Jan. 6 attack on the Capitol are vowing to launch criminal charges against Mark Meadows if he refuses to cooperate in the probe.

Meadows, who was chief of staff to then-President Trump at the time of the violent siege, is scheduled to testify privately before the panel on Wednesday, a date set after he recently agreed to participate in the probe after initially refusing.

But Meadows reversed course again this week, informing the committee that he won't attend Wednesday's deposition, according to Reps. Bennie Thompson (D-Miss.) and Liz Cheney (R-Wyo.), who are leading the investigation.

Meadows, through an attorney, is accusing the select committee of abusing its powers and undermining the executive privilege authority invoked by Trump and several members of his inner circle, a claim first reported by CNN.

Thompson and Cheney are vowing to charge ahead with Wednesday's meeting "as planned."

But "if indeed Mr. Meadows refuses to appear, the Select Committee will be left no choice but to advance contempt proceedings and recommend that the body in which Mr. Meadows once served refer him for criminal prosecution," Thompson said in a statement.

Trump is reportedly livid about the book, characterizing it publicly as "fake news." And Meadows has since walked back his own narrative, saying it was misinterpreted by a liberal media hellbent on disparaging the former president.

But Thompson and Cheney have other topics in mind to discuss, including details of the Jan. 6 Capitol assault that Meadows has included in his book.

"Even as we litigate privilege issues, the Select Committee has numerous questions for Mr. Meadows about records he has turned over to the Committee with no claim of privilege, which include real-time communications with many individuals as the events of January 6th unfolded," Thompson and Cheney said in a statement.

They're also keen to learn more about "voluminous official records" contained in Meadows's personal phone and email accounts. Those records, they noted, were required by law to be turned over to the National Archives at the end of Trump's presidency.

If the select committee were to vote to recommend Meadows for criminal contempt, the resolution would then head to the House floor for a vote of the full chamber.

The House minority leader, who helped scuttle an attempt to establish a bipartisan commission to investigate the insurrection, has spent months thrashing the select committee.
WASHINGTON, DC・1 DAY AGO
The Guardian

Liz Cheney among those to condemn remarks by former House speaker as committee member Zoe Lofgren says: ‘I think Newt has really lost it’
CONGRESS & COURTS・2 DAYS AGO
The Independent

The two sitting Republicans on the 6 January select committee have hit back at former speaker Newt Gingrich for suggesting they could be prosecuted if and when the GOP retakes Congress.Mr Gingrich made his remarks to Fox News’s Maria Bartiromo on Sunday morning, telling the famously pro-Trump host that under a Republican congressional regime, those who have pursued accountability for last year’s Capitol attack should expect rough treatment from the party’s leaders.“All these people who have been so tough and so mean and so nasty,” he said, “are going to be delivered subpoenas for every document, every conversation, every...
CONGRESS & COURTS・2 DAYS AGO
WEKU

The Jan. 6 panel wants to talk to Ivanka Trump

Jan. 6 panel grapples with whether to subpoena some of their own

Good morning, Early Birds. Come for Jackie's reporting on the Jan. 6 committee, stay for the giant cupcake. Send your tips about giant porcelain foodstuff and other matters of unusual size to earlytips@washpost.com. Thanks for waking up with us. 🚨: “The nation’s most restrictive abortion law remains in effect in...
CONGRESS & COURTS・8 DAYS AGO
Business Insider

The January 6 committee asked Kevin McCarthy to take part, but he refused and called the group "illegitimate."
CONGRESS & COURTS・13 DAYS AGO
Washington Post

A few weeks ago, Jan. 6 committee member Rep. Liz Cheney (R-Wyo.) floated a specific crime she suggested President Donald Trump might have committed that day: “corruptly” obstructing or attempting to obstruct an “official proceeding” — that is, Congress’s counting of electoral votes. On...
POTUS・13 DAYS AGO
USA TODAY

WASHINGTON (AP) — Republican leader Kevin McCarthy’s refusal to provide information to a bipartisan House committee about his call with then-President Donald Trump during the Capitol riot is deepening a standoff between the committee and GOP lawmakers, forcing investigators to consider whether they could subpoena one of their own.
WASHINGTON, DC・13 DAYS AGO
wpr.org

The Democratic-led Jan. 6 select committee has requested that House Minority Leader Kevin McCarthy, R-Calif., voluntarily provide information about events leading up to, during and after the violent attack on the U.S. Capitol by a mob of pro-Trump supporters a little over a year ago. In a letter requesting McCarthy's...
CONGRESS & COURTS・13 DAYS AGO
KOIN 6 News

Jan. 6 panel fires back at Jordan over refusal to

Rep. Jim Jordan (R-Ohio) gives an opening statement during a House Judiciary Committee oversight hearing of the Department of Justice on Thursday, October 21, 2021. The House committee investigating the Jan. 6, 2021, attack on the Capitol accused Rep. Jim Jordan of backtracking on his commitment to cooperate after the Ohio Republican said Sunday he would refuse to voluntarily appear before the panel.
CONGRESS & COURTS・13 DAYS AGO

Newt Gingrich suggested January 6 investigators could face jail time in a GOP-led Congress. He said that soon after a longtime ex-aide got a subpoena.
CONGRESS & COURTS・1 DAY AGO
Newsweek

"This is what it looks like when the rule of law unravels," the Wyoming Republican wrote on Sunday.
CONGRESS & COURTS・3 DAYS AGO
Sun-Gazette

Giuliani among others subpoenaed by Jan. 6 panel

WASHINGTON — The House committee investigating the Capitol insurrection issued subpoenas Tuesday to Rudy Giuliani and other members of Donald Trump’s post-election legal team who filed multiple lawsuits claiming election fraud that were roundly rejected by the courts but gave rise to the lie that Trump did not really lose the 2020 presidential contest.
PRESIDENTIAL ELECTION・7 DAYS AGO
The Independent

The House select committee investigating the Jan 6 attack on Congress is seeking an interview with former Attorney General William Barr following the shocking revelation first reported by Politico that Donald Trump’s allies drafted an executive order directing the seizure of voting machines.Rep Bennie Thompson, the committee’s chairman, made the announcement on Sunday during an interview with ABC News. He added that lawmakers on the panel have spoken with Mr Barr previously in the course of their investigation, but were now interested in learning more about the draft executive order created some time in December of 2020.Appearing on This...
PRESIDENTIAL ELECTION・2 DAYS AGO
AOL Corp

Tucker Carlson: China is wondering how America could be this stupid and destructive

When permanent Washington pushes for war with Russia, who benefits? We don't ask that question enough. The United States certainly doesn't benefit. That's obvious to anyone who thinks about it for a second. It's so glaringly obvious, in fact, that the people pushing this war immediately denounce you as a...
FOREIGN POLICY・1 DAY AGO
POLITICO

"Fraud is fraud, no matter who commits it or what party they prefer,” said Chris Hartline, a spokesperson for the NRSC.
TALLAHASSEE, FL・1 DAY AGO