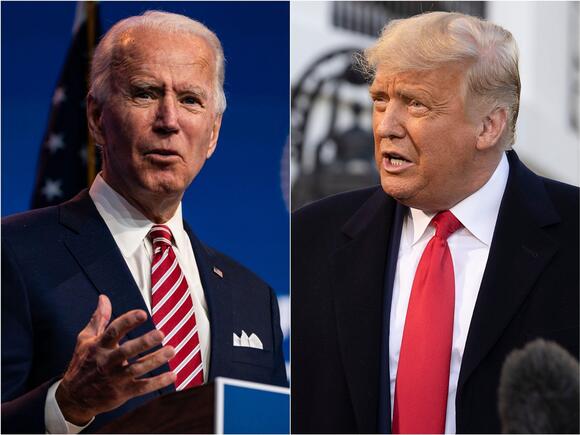 President Joe Biden and former President Donald Trump are virtually tied in a hypothetical 2024 rematch in a new Wall Street Journal poll that showed dismal approval ratings for Biden and wide dissatisfaction with the direction of the US.

The poll, the first under the Journal's new polling operation led by Republican pollster Tony Fabrizio, who worked for the Trump campaign in 2020, and Democratic pollster John Anzalone, who worked for Biden, surveyed 1,500 registered voters on their views of Biden and the state of the country from November 16 to 22.

Biden's low approval and voters' gloomy views about the state of the nation and issues like the economy and inflation spell trouble for Democrats heading into the 2022 midterms, as the party prepares to defend control of both chambers of Congress. Democrats have a narrow margin in the US House and none in the US Senate, which is split between 50 Democrats and 50 Republicans.

In a bright spot for Biden's party, voters think Democrats are better equipped than Republicans to handle the COVID-19 pandemic, improve quality of education, and lower healthcare costs. The poll also indicated that Democrats can improve their standing, particularly among undecided voters, by passing the Build Back Better Act , the party's sweeping social spending and climate bill.

An overwhelming 63% of respondents, however, still believe the US is on the wrong track, with just 27% believing that the US is on the right track. And voters believe current issues like the state of the economy, inflation, crime, and political divisions in America will only continue to get worse, not better, by significant margins.

But while voters may be souring on Biden and the state of the country, their dissatisfaction isn't sending them back to Trump, the de facto leader of the GOP. In the hypothetical 2024 rematch between Biden and Trump, 46% of voters would back Biden and 45% would back Trump.

While polls of hypothetical election matches three years away offer little predictive value or insight, Trump lagging Biden by one point (within the poll's margin of error of 2.5 points) despite voters' negative views on Biden and his party speaks to his potential vulnerabilities in a 2024 rematch.

White House press secretary Jen Psaki has said Biden intends to run again in 2024. Since leaving office, Trump has teased a 2024 comeback run on numerous occasions but hasn't made a formal announcement.

The poll results reflect the election outcome in 2020, when Trump lost the presidential race but Republicans surpassed expectations and performed much better down the ballot. On November 3, the GOP held onto competitive US Senate seats in Maine and North Carolina, flipped a dozen US House seats on net, and won back over 80 state legislative seats on net.

And in 2021, Republicans flipped the top three statewide offices and control of the lower legislative chamber in the previously blue-trending swing state of Virginia, a major warning sign for Democrats in 2022.

you both must have sent in paper ballots. Trump 2024. let's hope Biden makes it to the election. he don't look well. feel bad for the guy. Sure don't want Harris or Pelosi as President. enjoy filling your car, buying overpriced good and lumber. Your opinions, mine to.

I'm sure Covid will hang around till the 2024 election...got to have that 3am unfolded mail-in-ballot dump

in a separate unrelated poll 100% of prisoners support Democrats release everyone policy while only 0 % of crime victims support the bill.

One year after President Joe Biden raised his right hand to swear the presidential oath of office, more Americans disapprove of his performance and believe their country is on the right track than at any point since his term began.Of the 2,005 registered voters surveyed by Morning Consult and Politico, more than half – 56 per cent – either somewhat or strongly disapprove of the job Mr Biden has done in his first year as America’s chief executive, with just 16 per cent strongly approving of his performance and a quarter of respondents approving of his work somewhat. Worse yet...
PRESIDENTIAL ELECTION・1 DAY AGO
Newsweek

The former president is currently leading the Florida governor by an average of 38 percentage points.
PRESIDENTIAL ELECTION・1 DAY AGO
POLITICO

"Fraud is fraud, no matter who commits it or what party they prefer,” said Chris Hartline, a spokesperson for the NRSC.
TALLAHASSEE, FL・1 DAY AGO
Newsweek

While Republicans such as Greg Abbott and Ted Cruz have said Biden has an "open border," immigrations experts have said that is not correct.
PRESIDENTIAL ELECTION・1 DAY AGO

The controversial remark came after Doocy asked the president if inflation will be a "political liability in the midterms."
PRESIDENTIAL ELECTION・1 DAY AGO
The Independent

More than half of Americans disapprove of President Joe Biden’s handling of his responsibilities in a new Pew Research Group survey published on Tuesday that found Mr Biden’s approval rating slipping further underwater.Just above four in 10 Americans, 41 per cent, gave Mr Biden positive marks in the poll while 56 per cent say the president is not doing a good job; his approval rating dropped by the same amount, 3 percentage points, by which his disapproval rating rose over the four months between the last survey released by Pew and January 25.Corresponding with that shift in Mr Biden’s...
PRESIDENTIAL ELECTION・22 HOURS AGO
Newsweek

Banks also tweeted a video of the exchange between President Joe Biden and Fox News' Peter Doocy with the caption "Congrats" and tagged Doocy.
PRESIDENTIAL ELECTION・1 DAY AGO
Newsweek

Harris vacating the vice president's office would deny Democrats a majority in the Senate and set off another confirmation fight for her replacement.
PRESIDENTIAL ELECTION・1 HOUR AGO
Newsweek

Civilian control of the military is an essential element of our government, designed to ensure that the military reflects the will of the people. The Founding Fathers, concerned that a strong unitary executive could co-opt the military, divided that control between the executive and legislative branches. That foundation ensures we...
PRESIDENTIAL ELECTION・1 DAY AGO
Business Insider

"If all Democrats hang together ... they have the power to replace Justice Breyer in 2022 without one Republican vote in support," Graham said.
CONGRESS & COURTS・1 HOUR AGO

"This November is about one thing: It's impeaching Joe Biden to stop this madness and to stop this illegitimate regime from destroying our nation," said Bannon.
PRESIDENTIAL ELECTION・2 DAYS AGO
The Guardian

Biden pushed through a record number of judicial confirmations his first year in office and is a Senate judiciary veteran. He knows how to do this.
PRESIDENTIAL ELECTION・22 MINUTES AGO
Business Insider

Democrats press Biden to fulfill his campaign pledge after Breyer's retirement: 'You promised us a Black woman on the Supreme Court'

Biden pledged during the 2020 campaign to nominate the first Black woman to the Supreme Court, a pledge the White House reiterated last year.
PRESIDENTIAL ELECTION・1 HOUR AGO

“I get along great with Ron,” Trump said.
POTUS・1 DAY AGO
Business Insider

During his first months in office, Biden took laudable steps in the right direction on foreign policy, but he appears to have gotten cold feet.
PRESIDENTIAL ELECTION・2 DAYS AGO
The Independent

Sen Lindsey Graham has gone full circle in less than a year and is now one of the staunchest supporters of ex-President Donald Trump seeking a second White House term in 2024, he told Fox News Radio on Monday.The South Carolina Republican who famously declared “count me out” in the hours after the Capitol riot, when Mr Trump’s supporters attacked Congress and attempted to stop the 2020 election from being certified, has returned to his position within the inner circle of Trump acolytes and was once again on the golf course with the former president over the weekend.He told...
U.S. POLITICS・26 MINUTES AGO
Reuters