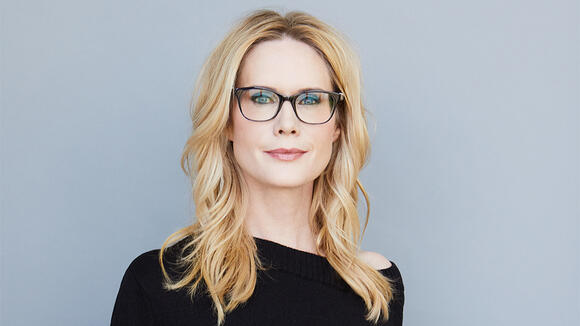 “Naomi” is based on the comic series of the same name and centers on a teenage superhero whose life is upended when supernatural events occur in her hometown. March will be in six-episode recurring role. The cast includes Kaci Walfall in the title role, along with an ensemble that boasts Alexander Wraith, Cranston Johnson, Claire Lanay and Camila Moreno. The series is written and executive produced by DuVernay and Blankenship, and executive produced by Paul Garnes of Array Filmworks. The series is from Array Filmworks in association with Warner Bros. Television.

March plays Akira, who is originally from a planet far away, but is now hiding on Earth. Naomi seeks her out, looking for answers.

In addition to her multi-season run as ADA Alexandra Cabot on NBC’s long-running crime series “Law & Order: SVU,” March most recently starred as convicted killer, Debora Green, in Lifetime’s “Ripped from the Headlines” original film “A House on Fire.” In 2018, she played first daughter Ivanka Trump in the Comedy Central special “A President Show Documentary” and starred in Adult Swim’s “Neon Joe.”

In 1999, March made her Broadway debut in Arthur Miller’s “Death of a Salesman,” a Tony award-winning revival that starred Brian Dennehy. She later co-starred with Liev Schreiber in the Broadway premiere of Eric Bogosian’s “Talk Radio” and was seen onstage in the off-Broadway production of “Boys Life” with Jason Biggs.

In 2019, March executive produced and was a cast member in the social media mockumentary “The Social Ones,” which premiered at Cinequest Film and Creativity Festival and the Los Angeles Film Festival. The film went on to win Cinequest’s Award for best comedy feature and was released in 2020.

March has also appeared in “The Invention of Lying,” “Mr. & Mrs. Smith,” “30 Rock” and “Grey’s Anatomy.” She is represented by Echo Lake Entertainment.

Jeff Garlin’s sudden depature from “The Goldbergs” over multiple misconduct allegations — which resulted last week in a mutual agreement to leave the Sony Pictures Television-produced ABC sitcom — has left the show in an unusual bind. How should Garlin’s character, Murray Goldberg, be dealt with on the show, given that Season 9 of “The Goldbergs” is in full swing and his sudden disappearance would be noticeable? While there could be a number of options for the creative team to address the situation, Variety has learned that the plan for now is that Garlin will indeed appear in the rest of...
TV SERIES・27 DAYS AGO
Variety

Inside the ‘Naomi’-Verse With Ava DuVernay and Kaci Walfall

Most of the superheroes on the DC-on-The-CW dramas have a long history with each other. Their comic book counterparts have been around for decades, and even in these adaptations, the characters have crossed over into each other’s worlds to team up and take down villains more than once. But when “Naomi” joins the lineup on Jan. 11, the show — and the titular character, played by Kaci Walfall — is on her own. She may be a big fan of Superman within the series — so much so that she runs one of the largest fan sites in the world about the...
TV SERIES・5 DAYS AGO
Variety

Audible is going into business with Kerry Washington, the Amazon-owned premium audio storytelling service’s latest partnership in a string of deals with A-list Hollywood talent. Under the pact, Simpson Street Productions, led by actor, director, producer and activist Washington (“Scandal,” “Little Fires Everywhere”) and EVP and Oscar-nominated producer Pilar Savone (“Django Unchained,” “Death Proof”), will develop and produce three scripted audio productions exclusively for Audible. The first of the three podcasts from Simpson Street is supernatural thriller “Prophecy” — with Washington set to star — launching later in 2022. That will be followed by romantic comedy “Between Me and You” and drama “The...
ENTERTAINMENT・3 DAYS AGO
The Hollywood Reporter

Life Goes On is inching a step further toward a return to primetime. NBC has handed out a put-pilot commitment to a sequel to the former ABC drama, with original star Kellie Martin attached to reprise her role. The potential series hails from writer/exec producer Nkechi Okoro Carroll and is set up at Warner Bros. Television, where the All American showrunner is based with a rich overall deal. Described as a sequel to the four-season drama that ran from 1989 to 1993, Martin will reprise her role as Becca Thatcher, who is now an accomplished doctor, and her extended family as she...
TV SERIES・4 DAYS AGO

Stream It Or Skip It: ‘Naomi’ On The CW, An Ava DuVernay-Produced Series Based On The Teenage DC Superhero

The comics world is full of people who are either alone or come to their powers alone and find a support group along the way. That is certainly how the Greg Berlanti Arrowverse series have been written. But with Naomi, The CW presents a DC-based superhero series that has a different worldview. It shows a main character, the one who discover she has powers, as someone with a pretty solid support system in her life. How does that help or hurt the show?
TV SERIES・5 DAYS AGO
Chicago Defender

Across the DC to Marvel universes, the number of Black female superheroes is slim. But leave it to acclaimed filmmaker Ava DuVernay to tell Hollywood to hold her drink as she works to fill the void. On Monday, DuVernay took to Twitter to explain the inspiration behind her new CW...
TV SERIES・4 DAYS AGO
Deadline

‘Naomi’: Ava DuVernay On Expanding The Naomi-Verse Beyond The Comic Book Via New CW Series—TCA

Ava DuVernay is expanding beyond the comic book world of Naomi via her upcoming CW series of the same name, premiering Jan. 11. And that could leave the door open for potential crossovers with other popular superhero series on the same network. “We got a lot of information in the first two episodes which means: we get to make up cool new things,” DuVernay said during the show’s TCA presentation on Thursday. “In terms of crossovers, we’re not thinking about that right now. She’s on her own path and I really think this is the first part of the Naomi-verse. People...
TV SERIES・10 DAYS AGO

Next week, audiences will get to see a whole new corner of the DCTV universe, when Naomi airs its premiere episode on The CW. The series will translate Naomi McDuffie's (Kaci Walfall) relatively-new comic world into live-action, a world that has already seen her cross paths with the Justice League and Young Justice on the page. Given the ever-growing state of The CW's Arrowverse of shows, there's already been speculation as to whether or not Naomi could cross over with other DC superhero shows. During Naomi's virtual panel at the Television Critics Association winter press tour, executive producer Ava DuVernay indicated that crossovers won't be happening right away, but "we will see what happens."
TV SERIES・10 DAYS AGO
Byrdie

Kaci Walfall on Beauty Essentials and Working With Ava DuVernay

Welcome to Byrdie's new series, Next Gen, where we profile Gen Z celebrities, influencers, and entrepreneurs. As a collective, members of Gen Z are dynamic trendsetters and culture shifters. And when it comes to beauty and wellness, they have ushered more creativity, inclusivity, and transparency into the industry. In this column, we're stepping into the minds of some of the most notable Gen Z'ers to learn more about how they are redefining beauty, the products they swear by, and their plans for the future.
CELEBRITIES・10 DAYS AGO
The Hollywood Reporter

Alison Brie is set to star opposite John Cena in Freelance, an action-comedy directed by Taken helmer Pierre Morel. AGC Studios, run by Stuart Ford, is behind the project, which has Steve Richards of Endurance Media, Sentient’s Renee Tab and Christopher Tuffin producing. The script by Jacob Lentz centers on an ex-special forces operator who, desperate to escape his humdrum life, takes a job providing security for a journalist who is hoping to salvage her career by interviewing a dictator. Things go sideways when a military coup breaks out in the middle of the interview, and the mismatched duo, along with the...
MOVIES・2 DAYS AGO
MassLive.com

“Naomi” premieres on The CW on Tuesday, Jan. 11, at 9 p.m. ET (6 p.m. PT). You can also stream the show on FuboTV (free trial). The series centers on a teenage girl with a “Superman” obsession who has superhuman powers of her own. “Naomi” is based on the DC Comics character with the same name who is a skateboarding high schooler from Port Oswego.
TV SERIES・5 DAYS AGO

Why Did Ava DuVernay's 'New Gods' Movie Get Canceled? She Returned to DC With 'Naomi'

The best film you've never heard of was canceled under mysterious circumstances. Famed director Ava DuVernay (Selma, A Wrinkle in Time) was set to direct New Gods in 2018, but the flick was canceled in 2021 after being stuck in development hell. Ava's new Naomi show on the CW sees her return to comics lore, but many distressed DC fans are sad they weren't able to experience her epic vision for a New Gods film.
MOVIES・4 DAYS AGO
KTVB

Meet Kaci Walfall, the newest addition to the DC superhero universe on the CW's Naomi. The 17-year-old actress, whose past credits include Army Wives, The Equalizer and Modern Love, plays the eponymous heroine Naomi McDuffie, a high school student (and Superman's biggest fan) who suddenly finds herself zapped with mysterious superpowers following a fantastical incident in her town. Unlike prior superhero origin stories, Naomi -- which hails from executive producers Ava DuVernay and Jill Blankenship, and is based on the 2019 comics by Brian Michael Bendis, David F. Walker and Jamal Campbell -- explores the untested waters of a young Black girl trying to figure out her place in the world while unraveling the truth behind who she really is.
TV & VIDEOS・5 DAYS AGO
romper.com

There is a new teen superhero series to watch! Coming to the CW, Naomi is about a Black teen girl who is zapped with mysterious superpowers after a supernatural incident in her small town. The incident sparks her to seek out her origins, which takes her on a multiverse journey with her friends.
TV SERIES・5 DAYS AGO
greensboro.com

How does a writer/director address social issues in a superhero series? Through normalization, Ava DuVernay says. “We’re doing really muscular things as it relates to race and gender and class but we’re doing it by playing it normal,” she says. In “Naomi,” DuVernay’s new series on the...
TV SERIES・2 DAYS AGO