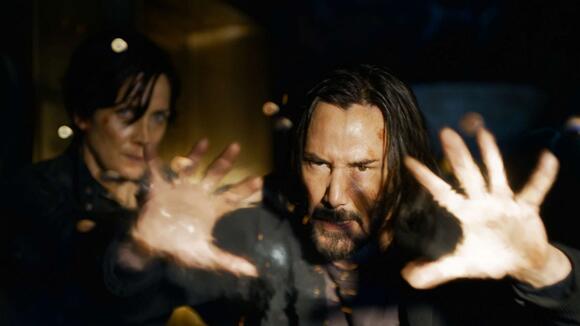 Warner Bros. unveiled a new trailer for "The Matrix Resurrections," and although much of the plot is still secret, it seems as if Carrie-Anne Moss' Trinity will prove as vital to the human resistance against the machines as Keanu Reeves' Neo was in the first three films.

"She believed in me," Reeves' Thomas Anderson/Neo says in the trailer. "It's my turn to believe in her."

Like Neo in the original films, Trinity seems to be in God mode once she snaps into the virtual reality of the Matrix.

This time around, we see her character having an awakening similar to Anderson's, realizing the world she occupies isn't real.

We also get a peek at Jonathan Groff's take on the machines' enforcer Agent Smith; the "Mindhunters" veteran replaces Hugo Weaving as the fearsome, suited baddie.

MORE: Keanu Reeves is in shock over the internet’s obsession with him

The trailer also gives some peeks of some set piece action scenes, from rooftops, to a speeding bullet train. And, of course, there's some reality-bending martial arts action, including a scene where Reeves blasts a bad guy through the air with a wave of energy. "I still know kung fu," he huffs.

Ron Perlman is hitting back against critics of Adam McKay’s Netflix satire “Don’t Look Up,” in which the “Hellboy” favorite stars opposite an ensemble cast that includes Leonardo DiCaprio, Jennifer Lawrence, Meryl Streep, Jonah Hill, Timothee Chalamet, Joe Morgan and Mark Rylance. Perlman stars in the movie as Colonel Benedict Drask, a war veteran tasked with flying to space to destroy a comet that’s heading toward the planet. “Don’t Look Up” has become one of Netflix’s biggest original films to date since debuting on Dec. 24 on the streamer. “Fuck you and your self-importance and this self-perpetuating need to say everything...
MOVIES・1 DAY AGO
The Hollywood Reporter

Isabelle Fuhrman is reprising her famous role of nine-year-old Esther from 2009’s Orphan in the upcoming prequel Orphan: First Kill. But instead of Fuhrman playing an older version of the iconic character, she will once again play the nine-year-old, without any de-aging work or CGI, which she calls “a challenge.” “I love the challenge of being able to play a kid because that’s never historically been done in cinema — I was like looking all this up, because I love looking up old movie history and things like that, and I was like, ‘Oh, an adult has never reprised the role...
MOVIES・2 DAYS AGO
The Hollywood Reporter

New Line is ready for round two of Moral Kombat. The studio has hired screenwriter Jeremy Slater to pen a sequel to the 2021 video game adaptation, The Hollywood Reporter has confirmed. Mortal Kombat debuted simultaneously in theaters and on HBO Max in the midst of the coronavirus pandemic in April 2021 and earned $83.7 million globally. According to HBO Max, which does not release viewership data publicly, it has been among the streaming service’s top feature films. Mortal Kombat is based on the seminal 1992 arcade fighting game created by Ed Boon and John Tobias. It centers on a tournament gathering the...
MOVIES・1 DAY AGO
Insider

Director Matt Reeves told Esquire UK that he "loved the idea" of removing the mask and showing the "whole theatricality of becoming this character."
MOVIES・2 DAYS AGO

A new teaser for "Guillermo del Toro's Pinocchio," a stop-motion animated version of Carlo Collodi's children's tale, has been released.
MOVIES・2 DAYS AGO
The Hollywood Reporter

Disney on Tuesday responded to recent harsh criticisms made by Peter Dinklage about the upcoming live-action remake of Snow White. The Emmy-winning Game of Thrones star was a guest on Monday’s episode of Marc Maron’s WTF podcast, where he blasted the announced film based on the 1937 animated classic. After noting the casting of West Side Story breakout Rachel Zegler, Dinklage told Maron: “Literally no offense to anyone, but I was a little taken aback when they were very proud to cast a Latina actress as Snow White — but you’re still telling the story of Snow White and the Seven Dwarfs....
MOVIES・2 DAYS AGO
GMA

'The Batman' director talks Kurt Cobain's influence on the film

EXCLUSIVE: Musician and filmmaker Flying Lotus has set the sci-fi horror film Ash as his second feature, on the heels of his body horror anthology Kuso, which made its world premiere at the 2017 Sundance Film Festival. The new film, for which the multi-hyphenate will also compose an original score, watches as a woman wakes up on a distant planet and finds the crew of her space station viciously killed, her investigation into what happened setting in motion a terrifying chain of events. Jonni Remmler penned the original screenplay. XYZ Films and GFC Films will produce, with Echo Lake on board as exec...
MOVIES・1 DAY AGO

When given the choice between the red pill to innovate the franchise and the blue pill to stay the same, “The Matrix Resurrections” ultimately chose the latter. While “The Matrix Resurrections” captures the hearts of longtime Matrix fans with its heavy reliance on nostalgia from characters and settings, the film fails to evolve past its source material, producing a project that is fan service at best and frustratingly dull at worst.
MOVIES・8 DAYS AGO
Paste Magazine

The thing about growing up in the nascent days of videogames and also being somebody who is fascinated by the forgotten-in-their-time geniuses and labor advocates who shaped Hollywood is that you can’t help but see echoes in the two media. It’s not every generation you see the rise of a new art form (or it didn’t used to be), but it’s hard not to note that videogame creators began as tinkerers whose craft was thought of as a way to amuse the young, and now their products rake in billions and have been co-opted by the sort of sparkling C-suite personalities who think nothing of hiring one of George W. Bush’s torture apologists and acting like that’s a good headline.
VIDEO GAMES・14 DAYS AGO
Polygon

In the 25 years since Scream revived mainstream horror, kickstarted a teen-movie boom, and inspired multiple sequels, every franchise has become Scream. Sure, they aren’t all youth-culture murder mysteries about defeating masked killers. But the self-aware commentary on the ins, outs, and tropes of its own genre, the element that really set Scream apart in 1996, has become a go-to screenwriting move for any franchise. (Though few of them execute it with such mischievous wit.)
MOVIES・14 DAYS AGO
digitalspy.com

How The Matrix Resurrections challenges its own queer themes

'The Matrix Resurrections' Soundtrack and Remix Vinyl Coming From Mondo

Mondo Music, in collaboration with WaterTower Music, announced today that it will be dropping a limited number of vinyl copies of The Matrix Resurrections: Original Motion Picture Soundtrack as well as a companion remix release, both of which will be available for preorder on January 19th. Featuring a score by Johnny Klimek and Tom Tykwer, the soundtrack is a feast for both the ears and the eyes, with Mondo creative director Mo Shafeek's breathtaking cover art serving as the perfect complement.
ROCK MUSIC・10 DAYS AGO
digitalspy.com

First trailer for Home and Away and Matrix stars' new thriller

The Matrix favourite Hugo Weaving and Home and Away's Ryan Kwanten headline the first trailer for futuristic thriller Expired. From Australian writer-director Ivan Sen, this one centres on hitman Jack (Kwanten), who meets the mysterious club singer April in Hong Kong (True History of the Kelly Gang actress Jillian Nguyen) before being struck by illness.
MOVIES・7 DAYS AGO
horrorsociety.com

Sony Pictures has acquired global rights to Rosalind Ross’ feature directorial debut Father Stu, starring and produced by Oscar nominee Mark Wahlberg. Written by Ross, the film follows the true-life story of boxer-turned-priest, Father Stuart Long, whose journey from self-destruction to redemption inspired countless people along the way. Sony has set a theatrical release of Father Stu for Good Friday, April 15. The move comes in the wake of MGM/UAR’s Thirteen Lives shifting from Easter weekend to Nov. 18. Father Stu will be opening on a weekend where Warner Bros has Fantastic Beasts: The Secrets of Dumbledore. Oscar winner Mel Gibson and Oscar nominee Jacki Weaver, and Teresa Ruiz...
MOVIES・2 DAYS AGO