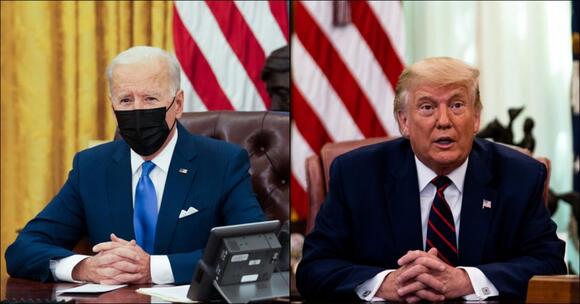 ( The Hill ) — More voters would back former President Donald Trump than President Joe Biden in a hypothetical match-up if the 2024 election were held today, according to a new Harvard CAPS-Harris Poll survey released exclusively to The Hill.

Forty-eight percent of voters in the survey said they would back Trump, compared with 45% for Biden. Another 8% were unsure.

The poll comes as Biden plays defense on a slate of issues, including inflation, stubbornly high rates of coronavirus infections and the messy withdrawal from Afghanistan.

Democrats have sought to rebut criticism by highlighting rising job growth and an intense vaccination push while arguing Republicans are downplaying the need for Americans to get inoculated.

Should Trump run, he would likely skate to the 2024 GOP nomination, according to the poll.

Trump holds a gargantuan lead over any other potential GOP contender. Sixty-seven percent of Republican voters would back the former president, with former Vice President Mike Pence coming in second with 9% and Florida Gov. Ron DeSantis coming in third with 8%.

The poll is largely in line with other surveys that have suggested Trump is a shoo-in for the Republican nomination if he wages a third White House bid in 2024.

“The collapse of Biden has led to a surge for President Trump on all fronts both in the GOP primary and in a potential general election,” said pollster Mark Penn .

Biden defeated Trump by about 7 million votes in 2020, or roughly 4 percentage points. He won largely because of narrow victories in Arizona, Georgia, Michigan, Pennsylvania and Wisconsin, all of which Trump had taken in 2016.

The Harvard CAPS-Harris Poll survey of 1,989 registered voters was conducted from Nov. 30 through Dec. 2. It is a collaboration of the Center for American Political Studies at Harvard University and the Harris Poll.

The survey is an online sample drawn from the Harris Panel and weighted to reflect known demographics. As a representative online sample, it does not report a probability confidence interval.

The CDC says it is working to "pivot" its language about who is - and isn't - fully vaccinated.
PHARMACEUTICALS・19 HOURS AGO
Newsweek

The Constitution, kids in schools, safe streets and a secure border were among the things the House Republican leader said the GOP stood for.
PRESIDENTIAL ELECTION・21 HOURS AGO

"They have not had to cast one bloody vote — which shows us where they're at," Sanders said of the legislative inaction. "We have got to change that."
VERMONT STATE・18 HOURS AGO
Newsweek

On Sunday the GOP lawmaker was asked about a proposed plan shared in the Trump White House to seize voting machines after the 2020 election.
CONGRESS & COURTS・17 HOURS AGO
Newsweek

"He will be helpful in winning back House seats," she said Sunday, but predicted "there starts to be a break" after the midterms.
PRESIDENTIAL ELECTION・19 HOURS AGO
The Independent

Sen Bernie Sanders appeared eager to escalate the war between various factions of the Democratic Party on Sunday during an interview with CNN in which he stated his support for the censure and potential primarying of a senator who voted against the party’s effort to change the filibuster and pass voting rights legislation.Mr Sanders appeared on CNN’s State of the Union and said that the Arizona Democratic Party was “exactly right” to censure their state senator after Ms Sinema voted with Republicans last week against the Democrats’ voting rights push.“On that particular vote that she and [Sen Joe] Manchin...
CONGRESS & COURTS・16 HOURS AGO

Joe Biden s run for the Democratic presidential nomination was all but declared dead as he headed to the South Carolina primary in late February 2020. He had finished fifth in New Hampshire and fourth in Iowa. Still, Biden advised skeptics to withhold judgment until a state with a large pool of Black voters, the most reliable Democratic constituency, had a chance to weigh in.“Too often your loyalty, your commitment, your support for this party has been taken for granted,” he said. “I give you my word as a Biden that I never, ever, ever will.”Black voters delivered, recasting...
PRESIDENTIAL ELECTION・23 HOURS AGO
Business Insider

During his first months in office, Biden took laudable steps in the right direction on foreign policy, but he appears to have gotten cold feet.
PRESIDENTIAL ELECTION・13 HOURS AGO
Fox News

Senate Judiciary Committee member Lindsey Graham, R-S.C., told Fox News that earlier Friday he met with former President Donald Trump and that the two had a frank discussion about the state of the country. Graham told "Hannity" that both agreed President Biden has been a disaster as commander-in-chief, and that...
POTUS・2 DAYS AGO
Newsweek

Pence has previously said that the decision in Roe v. Wade should be thrown on "the ash heap of history."
PRESIDENTIAL ELECTION・1 DAY AGO

Most analysts believe Republicans are well-positioned to take back control of the House in the midterms.
CONGRESS & COURTS・2 DAYS AGO
Newsweek

Russian-born Igor Fruman, a Florida businessman who helped former Donald Trump lawyer Rudy Giuliani search for dirt on Joe Biden in Ukraine ahead of the 2020 election has been sentenced to a year in prison for an unrelated campaign finance charge . Fruman will also have to pay a $10,000 fine. He was ordered to report to prison on 14 March. In September he pleaded guilty to a single charge of solicitation of a contribution by a foreign national. In his plea, he admitted to soliciting a million dollars from Russian businessman Andrey Muraviev. The money was intended to...
PRESIDENTIAL ELECTION・2 DAYS AGO
The Guardian

Sanders: ‘anti-democratic’ Republicans to blame for Biden woes, not just Manchin and Sinema

Psaki under fire for saying people upset at voting rights failure should ‘go to a kickboxing class, have a margarita’

White House Press Secretary Jen Psaki has once again earned the wrath of online commenters after telling Americans frustrated by the Democrats' failure to pass the Freedom to Vote: John R Lewis Act to do some aggressive cardio and have a drink. To be fair to Ms Psaki, she also told Americans to keep fighting after they took some time off for some self-care. “My advice to everyone out there who's frustrated, sad, angry, pissed off, feel those emotions, go to a kickboxing class, have a margarita, do whatever you need to do this weekend, and then wake up...
PRESIDENTIAL ELECTION・2 DAYS AGO
Newsweek

The Idaho Republicans sent the MyPillow founder a $6,000 bill to cover the cost of an election review conducted to disprove the election lies.
IDAHO STATE・2 DAYS AGO
Newsweek

"Black people voting is simply not a priority for Biden, Manchin or Sinema," the radio host said on his Thursday broadcast.
PRESIDENTIAL ELECTION・2 DAYS AGO
NewsRadio 740 KTRH