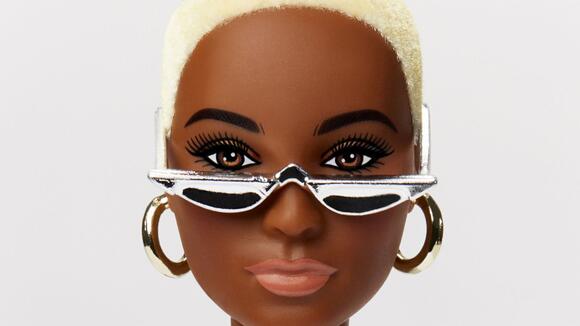 "Coolest Barbie ever?" Many are saying that after getting a glimpse of Kith Women's latest release.

The beloved streetwear brand revealed its latest limited edition doll that's dressed in some of the fashion label's coolest looks, shoes and accessories.

Rocking a shaved head of platinum blonde hair, the doll has a rich, deep skin tone and a face full of beautiful makeup.

The new Kith Women for Barbie was designed by up-and-coming stylist Mekka Shyian, who was the winner of the Kith Women x Barbie Styling contest.

The contest was initially introduced in 2019 and invited participants to style a selection of dolls. Submissions were later reviewed by some of the fashion industry's top stylists including Ade Samuel, Dianne Garcia and Maeve Reilly.

After finalists were chosen, the brand leaned on the public to choose the winning new Kith Women for Barbie doll.

Throughout the campaign, Barbie is seen wearing everything from a white bodysuit and tiny shades to chic cozy wear paired with heeled booties.

Fans were so excited for Kith Women's latest release that it sold out in a matter of hours Monday. There are also a variety of shoppable apparel picks associated with the release.

Inspired by Kith Women for Barbie, the brand is offering everything from chic crewneck tops and tees to cool logo hats and hoodies. Items are available in a variety of women's and kids' sizes while supplies last.

Jordan Brand is set to release a new Air Jordan 5 in a “Racer Blue” colorway in line with its Spring 2022 Retro Collection. Announced back in December, the Jumpman will be debuting a total of 15 new modernized installments of Michael Jordan’s classics along with the revival of the Air Jordan 12 “Playoff.” The silhouette was last seen in a low-top variation sporting an “Arctic Pink” colorway which is slated to drop before the current model at hand.
APPAREL・1 DAY AGO
Vogue

Levi’s Most Iconic Jeans Get A Sustainable Makeover

Jeans are the bedrock of many of our wardrobes – but, unfortunately, they frequently come with a high environmental cost, too. Often made from conventional cotton, they can require a huge amount of energy and water to produce, not least because of the intensive treatment and dyeing processes they tend to go through.
ENVIRONMENT・5 DAYS AGO
The Independent

Milan menswear designers seem to have decided on the answer, but the question remains: Have the pandemic lockdowns emboldened men to embrace a more feminine silhouette, including skirts, mini-dresses and cape coats?The Milan Fashion Week of previews for next winter and fall continued for the second day Saturday, with guests enjoying the pandemic norm of social distancing compared to previous cramped shoulder-to-shoulder seating. The calendar was slimmed down after the omicron variant started its surge in Italy last month, but that live shows went ahead at all was a sign of optimism after January 2021’s digital-only Milan Fashion Week....
DESIGNERS & COLLECTIONS・2 DAYS AGO
Footwear News

Teachers Can Get Discounts on Clothes & Shoes From These Brands

Going back to school this year has been a hot button issue amid concerns over rising coronavirus cases. One thing that teachers can look forward to this year are great discounts on shoes and apparel from some of their favorite retailers. It’s important that teachers are comfortable in order to succeed. Since teachers spend over eight hours a day on their feet in front of a classroom, it’s important to have easy to walk in shoes and comfortable clothes to do so. Many retailers recognize this need and in honor of their dedication to public education, so they are offering teachers...
APPAREL・4 DAYS AGO

Last year, Chicago unveiled a national monument honoring civil rights activist Ida B. Wells-Barnett. The sculpture—the city’s first monument honoring a Black woman—is known as the “Light of Truth,” a reference to her assertion that “the way to right wrongs is to turn the light of truth upon them.”
CHICAGO, IL・3 DAYS AGO
The Independent

The path to finding the perfect wedding dress is often a long and emotional one that traditionally involves months of planning and several visits to bridal boutiques before the big day.However, amid the ongoing coronavirus pandemic, many couples have reconsidered what’s really important to them when it comes to wedding planning, with an increasing number of brides-to-be realising that a gown doesn’t need to have a four-figure price tag to make it aisle-worthy.Thanks to a boom in last-minute micro-nuptials, high street wedding dress sales have surged with Bridebook reporting that 67 per cent of brides no longer consider an...
APPAREL・6 DAYS AGO
SheKnows

This Vegan Sneaker Brand Is Dame Helen Mirren-Approved & So Stylish

We’ve said it before and we’ll say it again—and we’ll keep saying it until it really resonates with you—but stars really are just like us. Some might say that they put their pants on the same way we do, but we’d like to argue that they lace up their shoes just like us. And, if you’re looking for a great pair of shoes that just so happens to have an A-List following, allow us to introduce you to Cariuma.  Founded in 2018, Cariuma is determined to rewrite the playbook for “cool-classic” sneakers. The mission? To create shoes that are comfortable, sustainable,...
DESIGNERS & COLLECTIONS・8 DAYS AGO
Design Taxi

Barbie has partnered with Balmain on a new collaboration comprising of clothing as well as non-fungible tokens, marking the first time the famed doll brand is taking on the digital art scene. According to Complex, the collection will consist of over 50 pieces of ready-to-wear clothing and accessories, and will...
DESIGNERS & COLLECTIONS・11 DAYS AGO

Almost two years into the pandemic—a time when constricting clothes are quite literally the last thing we want on our bodies—joggers for women are everywhere these days. Of course, they’re a casual and comfier alternative to leggings, but they can easily be dressed up if that’s what you’re going for. Our ideal outfit is a pair of joggers, a matching sweatshirt and possibly a blazer over top—comfy and cute.
LIFESTYLE・13 DAYS AGO
TrendHunter.com

Electronics accessories brand CASETiFY has teamed up with the Pharrel-owned streetwear label BBC ICECREAM to launch the BBC ICECREAM x CASETiFY collection. The new collection, which consists of an array of boldly patterned accessories, marks the third collaboration between these two brands -- the two had previously joined forces in 2015 and 2016 to offer a similar assortment of items. However, this year's collection is the most expansive collaboration between the two brands yet with new phone cases, watch straps, laptop covers, cardholders, and more, all being offered.
TECHNOLOGY・6 DAYS AGO
pymnts

From Clothing to Crypto, Celebrity-Owned Brands and Endorsements are Bigger Than Ever

For more than a century, celebrity product endorsements have been a mainstay of Americana and its countless advertising campaigns for one simple reason; they work. Usually. While far from foolproof, the use of a familiar face or popular person to move merchandise or boost brand awareness has proven time and again to be a sound investment that is usually worth every penny it costs.
NFL・14 DAYS AGO
Marie Claire

The 23 Best Plus Size Clothing Brands Out There

Fat fashion is evolving, and it’s honestly about damn time. It should go without saying, but I’ll say it anyway: The fashion world has a long way to go with the inclusion of fat bodies. However, if the past 10 years of plus size inclusion have anything to say about where the next decade will go, then buying clothes will no longer be a long-winded journey. Styling oneself can be hard when you take into account cost and size availability, and buying clothes that don't even fit can stunt creativity and the fun of fashion.
APPAREL・5 DAYS AGO

The Gap will begin selling an NFT collection of limited-edition digital hoodies starting tomorrow,. The Gap – a worldwide clothing retailer – recently announced the launch of its first NFT collection through Tezos. The collection features a “gamified digital experience” for creatives and lets customers digitally own a collectible Gap hoodie.
5 DAYS AGO
Highsnobiety

Swedish design has taken over the world. From corporations like H&M and IKEA dominating globally to smaller brands like Acne Studios and Our Legacy becoming household names, the country clearly knows its design. But the bigger names aren't the only ones you should pay attention to. The nation is filled...
DESIGNERS & COLLECTIONS・22 HOURS AGO
Gamezebo

Outfit Makeover is a game about tuning up your wardrobe, turning faux pas into fashion and getting some likes along the way. It’s a pretty simple experience, but there are things you’re going to have to know if you want to get the most out of the game.
APPAREL・1 DAY AGO
hypebeast.com

Hailey Bieber gives a lesson in color with her latest look. The model was spotted yesterday out and about in Los Angeles with Alexa Demie, a star on HBO’s “Euphoria”, while wearing a casual, functional outfit. For the ensemble, Bieber donned a white cropped polo-style button-up short sleeve top paired with a long-sleeve waffle-knit cropped shirt for a layered effect. On the lower half, she threw on a pair of pink stretch pants that added a pop of color. She accessorized the moment with dainty necklaces, gold hoop earrings and square black sunglasses. When it came down to footwear, Bieber opted for...
LOS ANGELES, CA・2 DAYS AGO
HelloBeautiful

Why Splurge On Coats When This Chic Quilted Jacket From Target Exists?

As a fashion editor, there’s no shame in my a-good-chunk-of-my-wardrobe-is-from-Target game. I mean, have you shopped the Who What Wear collection recently?! It’s easily my favorite of Target’s impressive in-house brands, constantly on the cusp of what’s trendy, new and lacking in my closet. Right now, the void I’m trying to fill is that of a perfect piece of quilted outerwear—and Target’s array of quilted jackets are saving the day, as usual. Over the last two weeks, I’ve seen the Who What Wear x Target Instagram account post this jacket not once, not twice, but three times! And each time, I...
APPAREL・28 MINUTES AGO