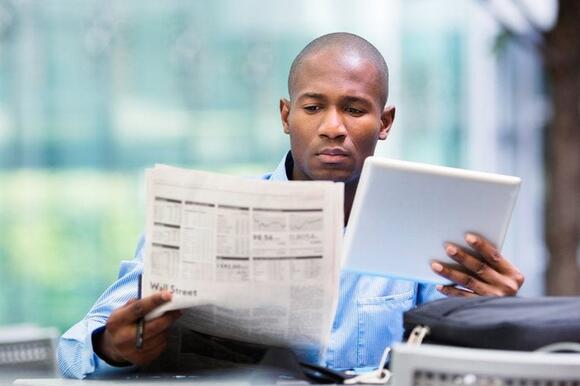 Blockchain-based company Chainlink announced today that former Google CEO, Eric Schmidt, has signed on as a strategic advisor to guide the team in its future growth and development. A bit of background might be helpful to help explain why this is a big deal.

Chainlink connects on-chain and off-chain data for all

Blockchains and cryptocurrency networks are isolated systems by design. For smart contracts on blockchains -- or "on-chain" for short -- to securely realize full potential, they need something called an "oracle" such as Chainlink. Oracles source and shuttle in real time the traditional info and data each of us gets from the internet everyday. Those internet data are known as "off-chain" data and information.

Specifically, an oracle is a secure piece of software that links the vast resources of the everyday off-chain internet with locked-down blockchains. Oracles such as Chainlink allow secure communication flow between blockchains and any off-chain system including data providers, payment systems, e-signatures, cloud-based applications, smart devices, other blockchains, and much more.

"Blockchain networks and Chainlink oracles are at a crucial inflection point in terms of growth and adoption. Eric's experience and insights around building global software platforms for next-generation innovation will be invaluable as we help developers and institutions usher in a new age of economic fairness and transparency," said Chainlink co-founder Sergey Nazarov in the company's official statement.

During Schmidt's 10-year run as CEO, Google dramatically scaled its worldwide network and services; executed a successful $23 billion initial public offering; launched global product offerings such as Gmail, Google Maps, and Chrome, as well as acquired several tech titans along the way including YouTube and Android.

"The launch of blockchains and smart contracts has demonstrated tremendous potential for the building of new business models, but it has become clear that one of blockchain's greatest advantages -- a lack of connection to the world outside itself -- is also its biggest challenge," noted Schmidt in the statement. "Chainlink is a secret ingredient to unlocking the potential of smart contract platforms and revolutionizing business and society."

Chainlink currently secures tens of billions of dollars across decentralized finance (DeFi), insurance, gaming, and other major industries. It also offers global enterprises and leading data providers a universal gateway to all blockchains. We'll see if Chainlink can prosperously connect its own on-chain future with Schmidt's off-chain past success at Google.

Investors should get familiar with this fast-growing blockchain.
MARKETS・22 HOURS AGO
The Motley Fool

Looking for the next Ethereum? These crypto assets could make you richer.
COMMODITIES & FUTURE・1 HOUR AGO
The Motley Fool

3 Reasons Metaverse Real Estate in Decentraland Is a Good Investment

Decentraland shows signs of long-term viability, allowing real estate investors to buy with confidence. Here's what it can offer.
REAL ESTATE・2 HOURS AGO

The tech giant is simplifying a complex takeover with a vague buzzword.
BUSINESS・3 HOURS AGO
The Motley Fool

Amazon stock has been practically flat for the past year. The company's growth in the cloud market may be overlooked as it helps fuel future ambitions.
BUSINESS・2 DAYS AGO
cryptoglobe.com

After years of building, The Open Network (TON) is excited to announce an exclusive addition to its team: Andrew Rogozov, former CEO of VK. Rogozov will join the TON Foundation as a Founding Member, leading the charge on the community-led successor of the Telegram Open Network. Originally designed and developed...
BUSINESS・1 DAY AGO
NBC Chicago

This cryptocurrency looks like the best one for beginners.
MARKETS・1 DAY AGO
The Motley Fool

Down 60%, Is It Time to Buy DigitalOcean Stock?

The cloud computing stock is a lot cheaper than it was a few months ago.
STOCKS・1 DAY AGO
The Motley Fool

What is "Web 3.0," and how can investors play this growth area?
MARKETS・2 DAYS AGO
The Motley Fool

Is staking worth it for the average investor?
STOCKS・2 DAYS AGO

Google’s digital cards might soon enable users to hold bitcoin and spend fiat. The company has formed partnerships with Coinbase and BitPay to enable the functionality. It is still unclear when Google would start accepting bitcoin for transactions. Google is tiptoeing into Bitcoin and cryptocurrencies as the company’s payments...
ECONOMY・5 DAYS AGO
PCWorld

Opera Software has continued its trend of building specialized browsers with The Crypto Browser Project, a specialized Web3 browser optimized for the use of the blockchain and cryptocurrencies, together with its own dedicated wallet. It doesn’t appear that Opera plans to replace its desktop browser with its Crypto Browser, although...
SOFTWARE・5 DAYS AGO
Fort Worth Star-Telegram

The news will certainly delight crypto aficionados: Alphabet's Google (GOOGL) - Get Alphabet Inc. Class A Report might offer crypto in its payment features as part of a broader strategy to team up with a wider range of financial services. That will help show users “the entire array of financial...
TECHNOLOGY・5 DAYS AGO
CoinDesk

What Advisors Should Watch For in Crypto in 2022

When I talk tech trends with technologists, there’s always a tendency to talk up their own book. Cryptocurrency advocates want to talk about all the latest innovations to help people invest in tokens and put their investments to work. Data specialists want to talk about all of the new ways to capture, store, secure and use data to help businesses grow and evolve.
SOFTWARE・5 DAYS AGO
AOL Corp

NFTs are a 'fantastic gateway' for women to break into crypto: Zuckerberg Media CEO

We are less than a month into the New Year, but so far 2022 has not been kind to crypto. The price of bitcoin (BTC-USD), the granddaddy of digital currency, is off to its worst yearly start since the dawn of crypto, down roughly 40% from its all time high, and analysts are bracing for more volatility ahead.
MARKETS・5 DAYS AGO
Benzinga

Bitcoin (CRYPTO: BTC) Bull and SkyBridge Capital founder Anthony Scaramucci says that his firm is investing heavily in Algorand (CRYPTO: ALGO) because he thinks the cryptocurrency will replace many of its competing blockchains. In a recent interview, he said that ALGO will challenge leading competitors in the crypto industry, just...
STOCKS・8 DAYS AGO
zycrypto.com

Brian Brooks has been appointed as a Strategic Advisor by Pledge Finance. Brian’s outstanding career includes stints as CEO of Bitfury and Binance.US, skills that will help Pledge Finance establish itself as the leading platform for developing DeFi long-term lending dApps. Brian is a Harvard graduate who served as...
BUSINESS・14 DAYS AGO
The Motley Fool

This cloud computing company has crashed back to earth in recent months.
STOCKS・1 DAY AGO