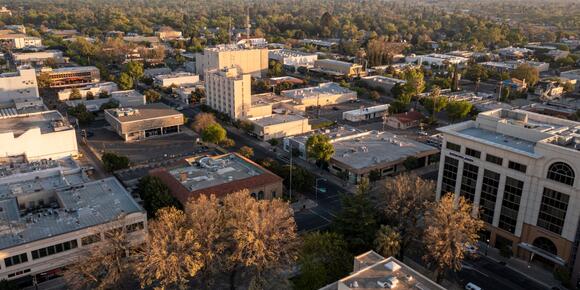 Home prices in October showed the biggest 12-month gain in 45 years, but for some cities, the end is nigh.

The latest CoreLogic Home Price Index (HPI) shows the housing market was still in the midst of explosive growth as fall rolled in, posting an 18% increase over October 2020 figures, the biggest jump since the index began in 1976.

On a month-over-month basis, the increase was a bit less impressive, showing a 1.3% gain since September. And October could be the last month of substantial gains. CoreLogic notes monthly price growth has slowed from its April peak and predicts the month-over-month increase in November will be just 0.2%.

Even in October, not every state saw stratospheric price increases. New York, Louisiana, Alaska, and North Dakota were all notably below the national average. Some states, though, exceeded it by a wide pace.

Here’s a look at the states with the highest year-over-year change in the CoreLogic Home Price Index:

Not surprisingly, the major cities in many of those states saw big increases as well. Phoenix home prices were up an average of 30.5%, for instance, and Las Vegas prices jumped 24%.

The salad days could be just about over for other cities, though. CoreLogic’s Market Risk Indicator, also released Tuesday, points to three cities that are at high risk (50% to 75%) of a price decline over the next 12 months—and two with moderate (25% to 50%) chances:

Houston didn’t make the top five, but researchers at CoreLogic say prices in that city, too, are likely to drop in the next year:

“The HPI Forecast also reveals the continued disparity in home price growth across metros,” the report read. “In markets like Houston, which was hit hard by the collapse of the oil industry and the recent hurricane season, home prices are expected to decline 1.2% by October 2022.”

Never miss a story: Follow your favorite topics and authors to get a personalized email with the journalism that matters most to you. The housing shortage has forced many potential buyers to move into rental properties as they look for their next home (and often find themselves on the wrong side of a bidding war). That option, however, is becoming increasingly expensive.
HOUSE RENT・16 HOURS AGO
Fortune

The housing boom isn’t over yet, predicts a top analyst who sees a 12% increase this year

This article is part of Fortune’s quarterly investment guide for Q1 2022. If you're confused by the conflicting news over where home prices are headed this year, join the crowd. The views from the top forecasters are all over the map. Most bullish is Goldman Sachs, foreseeing average appreciation of 12% through 2022. Zillow is also in the double-digit camp at 11%, but from there the estimates fall fast. Mortgage guarantors Fannie Mae and Freddie Mac posit 7.9% and 7.0% respectively, numbers that would register well above the 4.6% average performance witnessed since 1980. The next batch of the predictions drop well below the current pace of inflation, implying families could see their home’s value trail the rise in what they're paying for cars, appliances, and groceries. Realtor.com's number is 2.9%, Corelogic anticipates a gain of just 1.9%, and believe it or not, a prestigious industry player, the Mortgage Bankers Association, reckons that average prices will decline from $362,000 at the start of 2022 to $352,000 by year-end, for a drop of 3.2%.
BUSINESS・5 DAYS AGO
Fortune

Never miss a story: Follow your favorite topics and authors to get a personalized email with the journalism that matters most to you. Fed Chair Jerome Powell made it clear while speaking to Congress earlier this month that taming stubbornly high inflation will require the U.S. central bank to both halt its asset purchase programs and raise rates multiple times in 2022.
BUSINESS・5 DAYS AGO
KLST/KSAN

Many buyers who got squeezed out of the 2021 real estate market are looking to 2022 for calmer seas. Whether that is going to happen remains to be seen.
REAL ESTATE・6 HOURS AGO

Spring is in the ... housing market? Home prices are surging early this year. Here's why.

The early reversal is being attributed to historically low levels of inventory and homebuyers trying to lock in mortgage rates before they go up.
REAL ESTATE・23 HOURS AGO
GOBankingRates

The U.S. housing market might be barreling ahead in overdrive these days, with historically high home values and soaring demand, but home builders remain worried about a variety of problems related to...
BUSINESS・20 HOURS AGO
24/7 Wall St.

Home Prices in This City Are Soaring

A recent analysis reveals that home prices are rising the most in Phoenix, Tampa and Miami.
REAL ESTATE・16 HOURS AGO
themreport.com

“For the past several months, home prices have been rising at a very high, but decelerating, rate. That trend continued in November 2021,” said Craig J. Lazzara, Managing Director at S&P DJI. “The National Composite Index rose 18.8% from year-ago levels, and the 10- and 20-City Composites gained 16.8% and 18.3%, respectively. In all three cases, November’s gains were less than October’s. Despite this deceleration, it’s important to remember that November’s 18.8% was the sixth-highest reading in the 34 years covered by our data (the top five were the months immediately preceding gains in November).
REAL ESTATE・14 HOURS AGO

Gas prices fall slightly in Kentucky, but many regions see increase with global supply under pressure

Despite lower demand for gasoline typical of the winter season, pump prices are edging their way higher in many parts of the country. The national average for a gallon of gas is $3.33, 2 cents more than a week ago. The culprit is the rising price for oil, which is now bouncing around $85 per barrel, nearly $20 more than in November.
KENTUCKY STATE・1 DAY AGO
Bradenton Herald

Bradenton-Sarasota home prices see another record month. When will market start to cool?

Prices for existing single-family homes in the Bradenton area, which rose at a ferocious rate all year long, set yet another record in December with a median price of $460,000. The December price was 28.5% greater than in the same month a year earlier when the median was $357,900. Prices...
BRADENTON, FL・4 DAYS AGO
WETM 18 News

It doesn’t take much to realize the housing market in Cape Coral is booming. Plots of land, houses being constructed, homes for sale- demand is high. So why are options to buy a home few and far between?
CAPE CORAL, FL・3 DAYS AGO

Never miss a story: Follow your favorite topics and authors to get a personalized email with the journalism that matters most to you. Bidding war rates on U.S. houses hit their lowest point in a year last month, but they’re still notably higher than pretty much all of 2020.
REAL ESTATE・6 DAYS AGO
Community Impact Austin

More residential homes sold in the city of Austin in 2021 than in any other year, according to a Jan. 18 press release from the Austin Board of Realtors. In total, 13,351 homes were sold in Austin in 2021, a 4.6% year-over-year increase, ABoR’s 2021 year-end report shows. This outpaced Travis and Williamson counties, which saw a 2.3% increase and a 2% increase, respectively, in residential home sales.
AUSTIN, TX・5 DAYS AGO
WATE

How much will home prices rise in 2022: A look at the housing market in Knoxville

Australia’s major cities continue to see robust growth in the luxury residential market, according to a report from Knight Frank released Tuesday. There were 1,971 prime sales—the top 5% of homes in a market—recorded in the third quarter of 2021, a 119% rise compared to the same time in 2020, according to data from the estate agency. The sales number is the second-highest on record.
REAL ESTATE・7 DAYS AGO
constructforstl.org

Fueled by a trifecta of favorable cap rates, an underserved apartment market and sharp increases in market demand, St. Louis is starting to gain momentum with the potential to become a new multifamily hotspot. As investors and developers take note, capital that typically has been focused in higher growth markets on the coast and cities like Chicago and Nashville is starting to flow into the Gateway CIty.
SAINT LOUIS, MO・8 DAYS AGO
wsau.com

Trends that have taken hold during the pandemic are poised to fuel another banner year for the global luxury housing market in 2022, according to a report from Sotheby’s International Realty. The report is predicting a strong year for the sector. Bloomberg noted key factors behind the forecasted boom...
BUSINESS・14 DAYS AGO
foxbangor.com

STATEWIDE — Gas prices in Maine fell just over a penny a gallon last week. The average price is now $3.38 a gallon. That’s according to GasBuddy’s daily survey of more than 1,200 stations around the state. Gas prices are currently just over 3 cents a gallon...
MAINE STATE・8 DAYS AGO