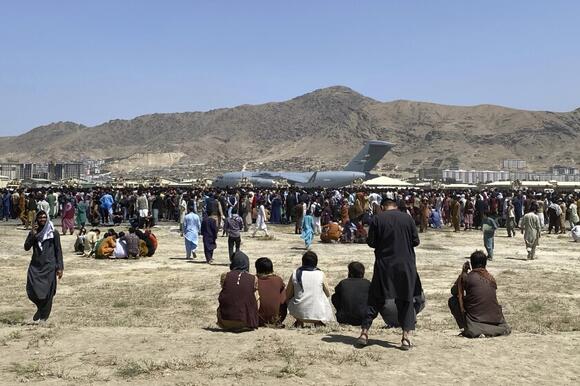 Britain’s Foreign Office abandoned many of the nation’s allies in Afghanistan and left them to the mercy of the Taliban during the fall of the capital, Kabul, because of a dysfunctional and arbitrary evacuation effort, a whistleblower alleged Tuesday.

In devastating evidence to a parliamentary committee, Raphael Marshall said thousands of pleas for help via email were unread between Aug. 21 and Aug. 25, days after the Taliban seized Kabul . The former Foreign Office employee estimated that only 5% of Afghan nationals who applied to flee under one British program received help. He said that at one point he was the only person monitoring the inbox.

“There were usually over 5,000 unread emails in the inbox at any given moment, including many unread emails dating from early in August," he wrote to Parliament's Foreign Affairs Select Committee, which is investigating Britain's chaotic exit from Afghanistan . “These emails were desperate and urgent. I was struck by many titles including phrases such as ‘please save my children.’"

Marshall said some of those left behind had been killed by the Taliban.

One of Marshall’s most explosive allegations is that British officials spent time and energy arranging the evacuation of almost 200 dogs and cats from a Kabul animal shelter run by Nowzad, a charity founded by former British Royal Marine Pen Farthing.

Marshall said Foreign Office staff had “received an instruction from the prime minister to use considerable capacity to transport Nowzad’s animals.” He said British soldiers were put at risk to get the animals out of Kabul.

Prime Minister Boris Johnson’s spokesman, Max Blain, said the allegation was “entirely untrue” and neither Johnson nor his wife, Carrie, an animal-welfare advocate, had been involved in helping the animals leave.

He said Farthing and his animals left Afghanistan on a privately chartered plane that was given clearance by British officials.

“We are confident that, at no point, clearance for that charter plane interrupted our capability to evacuate people,” Blain said.

As the Taliban took power in August, the United States, Britain and other countries rushed to evacuate Afghans who had worked with Western forces and others at risk of violent reprisals.

Britain managed to airlift 15,000 people out of the country in two weeks, and the government says it has since helped more than 3,000 others leave Afghanistan.

But an Afghan Resettlement Scheme announced by the government in August with the goal of bringing another 20,000 people to Britain has yet to get underway.

Justice Secretary Dominic Raab — who was foreign secretary at the time of the pullout but was moved to his present post afterward in what was widely seen as a demotion — defended his actions.

“Some of the criticism seems rather dislocated from the facts on the ground, the operational pressures that, with the takeover of the Taliban, [were] unexpected around the world," he told the BBC. “I do think that not enough recognition has been given to quite how difficult it was .”

Tom Tugendhat, a lawmaker from the ruling Conservative Party who heads the foreign affairs committee, said Marshall's testimony “raises serious questions about the leadership of the Foreign Office.” The committee is due to quiz senior Foreign Office civil servants later Tuesday.

The Taliban stormed across Afghanistan in late summer, capturing all major cities in a matter of days, as Afghan security forces trained and equipped by the U.S. and its allies melted away. The Taliban took over Kabul on Aug. 15.

Many who had worked for Western powers or the government worried that the country could descend into chaos or that the Taliban would carry out revenge attacks against them.

Many also feared that the Taliban would re-impose the harsh interpretation of Islamic law that they promulgated when they ran Afghanistan from 1996 to 2001. At the time, women had to wear the all-encompassing burqa and be accompanied by a male relative whenever they went outside. The Taliban banned music, cut off the hands of thieves and stoned adulterers.

The British government on Saturday accused Russia of seeking to replace Ukraine's government with a pro-Moscow administration, and said former Ukrainian lawmaker Yevheniy Murayev is being considered as a potential candidate
POLITICS・2 DAYS AGO

Russia’s Foreign Ministry on Sunday rejected a British claim that Russia was seeking to replace Ukraine’s government with a pro-Moscow administration, and that former Ukrainian lawmaker Yevheniy Murayev was being considered as a potential candidate. Britain’s Foreign Office on Saturday also named several other Ukrainian politicians it said had links with Russian intelligence services, along with Murayev who is the leader of a small pro-Russia party that has no seats in the parliament.The U.K. government made the claim based on an intelligence assessment, without providing evidence to back it up. It comes amid high tensions between Moscow and the...
POLITICS・2 DAYS AGO
Reuters

Britain says it is supplying anti-tank weapons to Ukraine

LONDON, Jan 17 (Reuters) - Britain said on Monday it had begun supplying Ukraine with anti-tank weapons to help it defend itself from a potential invasion, during a stand-off with Russia which has massed troops near the Ukrainian border. Western countries say they fear Russia is preparing a pretext for...
MILITARY・7 DAYS AGO
The Independent

Talks with Taliban begin in Norway

A Taliban delegation led by acting Foreign Minister Amir Khan Muttaqi on Sunday started three days of talks with Western government officials and Afghan civil society representatives in Oslo amid a deteriorating humanitarian situation in Afghanistan.The closed-door meetings are taking place at a hotel in the snow-capped mountains above the Norwegian capital, Oslo, and the first day will see Taliban representatives meeting with women's rights activists and human rights defenders from Afghanistan and from the Afghan diaspora.Before the talks, the Taliban’s deputy minister of culture and information tweeted a voice message he said was from Muttaqi, expressing hope for...
POLITICS・2 DAYS AGO
AFP

Talks in Oslo Sunday between the Taliban and Afghan civil society members served as an "icebreaker", on the eve of their meeting with Western diplomats to discuss human rights and the humanitarian crisis in Afghanistan, an Afghan participant said. Thomas West, the US special representative for Afghanistan, tweeted on Sunday: "As we seek to address humanitarian crisis together with allies, partners, and relief orgs, we will continue clear-eyed diplomacy with the Taliban regarding our concerns and our abiding interest in a stable, rights-respecting and inclusive Afghanistan."
WORLD・1 DAY AGO

A former prime minister of Australia has branded comments made by Liz Truss “demented” after she claimed China could exploit a Russian invasion of Ukraine to launch its own attacks in the Pacific.Paul Keating made the extraordinary attack on the remarks of the foreign secretary – and Tory leadership contender – as he also tore into the UK’s “delusions of grandeur” in considering itself a global big-hitter.The spat came after Ms Truss, while on a visit to Australia, argued that no one should rule out Beijing aggression if Vladimir Putin sends his troops into Ukraine.“Russia is working more closely...
WORLD・22 HOURS AGO
raleighnews.net

Schools, universities in Afghanistan to reopen in March, says Taliban

Kabul [Afghanistan], January 17 (ANI): The Taliban on Sunday said that it will open schools and universities for girls and boys in March 2022. Deputy Minister of Information and Culture and spokesman of the Islamic Emirate of Afghanistan Zabiullah Mujahid speaking with US-based news agency Taliban is not against education, but boys and girls must be completely segregated in schools, reported Tolo News.
WORLD・8 DAYS AGO
Marietta Daily Journal

Inside the fall of Afghanistan: A journalist’s diary

Los Angeles Times foreign correspondent and photographer Marcus Yam entered Afghanistan on the verge of the American withdrawal. He stayed for the next two months to document the Taliban’s swift takeover. Here are his reflections. Aug. 14: I arrived in Afghanistan as the Taliban was advancing on the capital...
WORLD・10 DAYS AGO
The Independent

UK begins withdrawing staff and families from embassy in Ukraine

Some British embassy staff and their dependants are being pulled out of Kyiv in response to the mounting Russian threat to Ukraine The Foreign Office confirmed the move after the United States ordered the families of all American personnel at the US Embassy to leave the country in response the the risk of an invasion.#Ukraine Some Embassy staff and dependants are being withdrawn from Kyiv in response to growing threat from Russia. The British Embassy remains open and will continue to carry out essential work. (see ’Summary' page) https://t.co/NDOk0vdKBg pic.twitter.com/OSm9fd89id— FCDO Travel Advice (@FCDOtravelGovUK) January 24, 2022Russian forces have massed...
EUROPE・1 DAY AGO

The Western alliance’s statement summed up moves already announced by member countries, but restating them under the NATO banner appeared aimed at showing its resolve.
POLITICS・23 HOURS AGO
Los Angeles Times

Ukraine urges calm, saying a Russian invasion is not imminent

Ukraine's leaders are seeking to reassure their jittery compatriots that an invasion from neighboring Russia is not imminent, despite a troop buildup.
POLITICS・2 HOURS AGO
The Independent

Boris Johnson has ordered an inquiry into claims made by a former minister that she was sacked because of concerns about her “Muslimness”.Following a phone conversation with Nusrat Ghani on Sunday evening, the Prime Minister has asked the Cabinet Office to “establish the facts” regarding the claims of Islamophobia made by the Conservative MP.A senior Cabinet Official civil servant, Sue Gray is already carrying out a separate investigation into allegations that lockdown-busting parties were held in Downing Street.As he said at the time, the Prime Minister takes these claims very seriouslyDowning StreetMs Ghani has claimed that she was removed...
WORLD・1 DAY AGO
The Independent

British troops will be sent to help protect countries in eastern Europe if Russia invades Ukraine, Boris Johnson has told MPs.As the crisis mounts, the prime minister attacked the Kremlin for threatening the use of “brute force to terrify reasonable people into giving way to completely unacceptable demands”.Overnight, Joe Biden announced that 8,500 US troops are being put on high alert to deploy to Europe as Nato responds to the rising tensions by reinforcing its eastern borders.In his statement, Mr Johnson said: “If Russia invades Ukraine, we would look to contribute to any new Nato deployments to protect our...
POLITICS・20 MINUTES AGO
Newsweek

Separatists in the Donbas region say Kyiv has built up military hardware as President Joe Biden seeks to present a united front against Russia.
POLITICS・4 HOURS AGO
The Independent

UK armed forces minister James Heappey has warned that Russian forces are already in Ukraine as tensions ramp up over the prospect of Moscow attacking its neighbour.Mr Heappey said that a “significant” number of individuals associated with “Russian military advance-force operations” were already in the country ahead of a possible invasion. Writing in The Sun newspaper, Mr Heappey added that the UK government would expose Russian plans where “we see them, such as their ‘false flag’ attacks and plots for puppet regimes”. Russia has denied allegations that it plans to invade although it has amassed troops around the Ukrainian border,...
POLITICS・2 HOURS AGO
Los Angeles Times

Nicholas Goldberg: Can sanctions repel a Russian invasion of Ukraine?

Even when the U.S. is saber-rattling, our real foreign policy tool of choice is economic and diplomatic sanctions.
FOREIGN POLICY・3 HOURS AGO
The Independent

Ukraine news – live: Invasion would be ‘tragic and futile’, Russia told as Truss to visit Kiev

Boris Johnson has warned Vladimir Putin that it would be “tragic and futile” for Russia to invade Ukraine. The British prime minister said that a “path of bloodshed and destruction” would be damaging for the Kremlin, as Ukrainians were “determined to fight” for their country. Speaking in the Commons, Mr Johnson added that he will “not hesitate” to toughen economic sanctions against Russia in the event of an incursion. Meanwhile, foreign secretary Liz Truss said she would be travelling to Ukraine next week. She added that deployment of British troops to the country would be “unlikely”. A UK defence...
POLITICS・24 MINUTES AGO