If Ray Bourque and Paul Pierce and Tom Brady can change teams, why not Sam Mewis ?

In fact, Mewis is getting rather good at swapping out one jersey for another.

Last Friday she held up her newest one -- red, with the Number 15 -- in Kansas City to signal the latest phase of her storied soccer career.

Unlike Bourque, Pierce and Brady, Mewis hasn't played around here since her standout days at Whitman-Hanson High School. But she's been all around the world -- literally -- since then, winning an NCAA crown at UCLA, three club titles in the National Women's Soccer League, and the 2019 Women's World Cup with the wildly successful U.S. National Team.

Kansas City will be her third different NWSL franchise, following a stint with the Western New York Flash (2015-16) and two separate ones with the team the Flash morphed into -- the North Carolina Courage (2017-20, 2021).

Mewis, a 6-foot midfielder, also detoured to England for the 2020-21 season, leading the Manchester City women to an FA Cup and a runner-up finish in the top-flight domestic league.

Now, she's the new face of the Current, following a Nov. 30 trade that sent her from Carolina to K.C. in exchange for defender Kiki Pickett and the No. 3 overall pick in the upcoming NWSL draft.

"I'm not sure how to introduce a player who needs no introduction," Angie Long, one of the Current's three owners, said at a news conference last Friday introducing Mewis. "We're excited to have Sam Mewis play for us in Kansas City. She's a World Cup winner, a three-time NWSL champion and many would argue that she's the best player in the world. We are excited to have her as part of our team. Kansas City is going to win some championships."

OK, no pressure then.

Mewis, 29, just laughed off any idea of the weight of the world burdening her shoulders. After all, it's not as if she isn't used to people counting on her. "I am so grateful to be here," she said. "Thank you so much to Angie and everybody who was involved with helping to make this happen. I feel already so welcome here and excited to be part of this club, where it seems to me that everything is being done the right way. I'm just thrilled to be part of this team moving forward. I can't wait to meet my teammates, meet the fans, get back out on the field. I've been injured for a little bit, so I'm eager to be playing again."

When she signed with Manchester City during the summer of 2020, Mewis talked about the allure of "getting a little outside my comfort zone."

This move, which she no doubt had a hand in orchestrating -- national team stars don't get swapped without their permission -- is in the same vein.

"I'm really looking forward to the opportunity to grow this club and help (it) climb the standings," Mewis said. "This feels like a fresh start and a new chapter for me. It's something where I feel like I can grow a lot with the club. I'm really honored to be here. I'm honored that they wanted me as part of the team. I hope that I can contribute a lot." 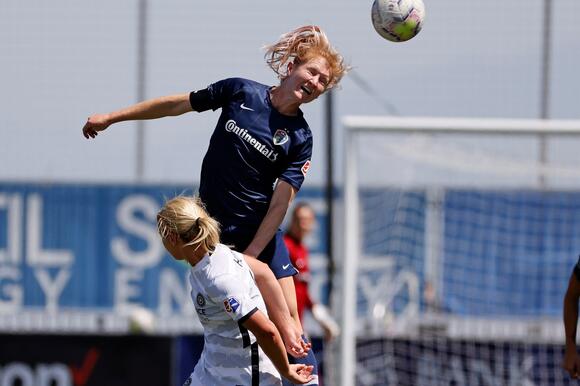 The Current are an interesting landing spot. Competing under the bland place-holder name "Kansas City NWSL," it finished last in the 10-team league this past season with a record of 3-14-7.

Despite that humble start, the new ownership group -- financial investors Angie and Chris Long and former college player Brittany Matthews (she's engaged to Chiefs quarterback Patrick Mahomes) -- has big plans. The trio has invested in a $15 million, 17,000-square-foot training facility and plans to build a $70-million soccer-specific stadium at Berkley Riverfront Park for the 2024 season. The latter is significant since it would be the first stadium built specifically for an NWSL team.

"This is an NWSL-only stadium; this is so unbelievable and cool," Mewis said. "It's just super exciting for the league, and I was really impressed by it and impressed by everything I've heard about what's going on here."

With all those amenities in place, the Current still needed a face of the franchise.

"Kansas City is here for real," Angie Long said, "in case anyone didn't notice (before) with all of the investments that we've made. Sam is such a cornerstone player in everything that she brings -- on the field, off the field. The leadership (she brings), the joy of the game. I've spent the morning with her and she's such a fun person to be around. Such positivity, such energy. It's fantastic for us."

More: HELP YOUR NEIGHBORS IN NEED: How to contribute to The Patriot Ledger’s Lend a Hand fund

Mewis' move to the Midwest was part of a flurry of trades across the NWSL as teams scrambled to prepare for the looming expansion draft that will stock two new franchises -- Los Angeles-based Angel City FC and San Diego Wave FC -- that will begin play in 2022. 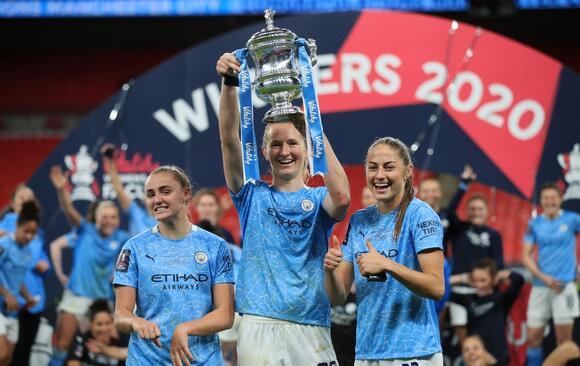 Mewis declined to say if she had requested out of North Carolina, noting, "Obviously, with the expansion draft coming up, everybody knew that something had to change. I am super excited about this opportunity to be in Kansas City and I'm really grateful for my time in North Carolina. I think that I'm ready to focus on being here."

Mewis told the assembled media that she loves barbecue, is happy to have U.S. National Team goalkeeper Adrianna Franch as a familiar face on the Current roster, and isn't fretting over the fact that K.C. doesn't yet have a head coach in place for the 2022 season.

"I feel like I have a lot of trust in Angie and the whole organization," Mewis said. "Of course, when news comes that you're switching clubs, you'd love to talk to the coach, but I don't have any doubt that they're going to find the right person and that person is going to do a fantastic job." 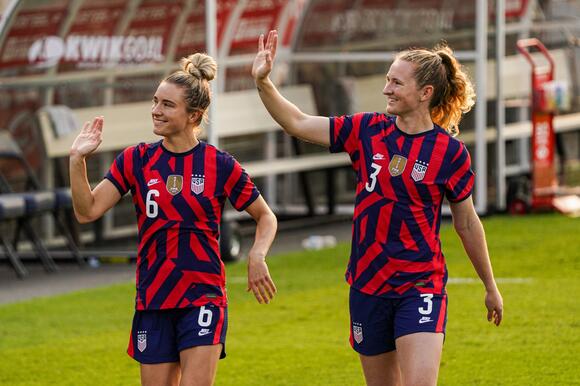 Although this is a blank slate for her, the Mewis family does have a prior connection to Kansas City. Older sister Kristie, a 30-year-old midfielder for the Houston Dash, played in the inaugural NWSL game on April 13, 2013 when her FC Kansas City team hosted the Portland Thorns in a 1-1 draw. FC Kansas City won two league championships before disbanding in 2017.

More: The Sisterhood of the Traveling Soccer League

"I don't think I ever came here when she was playing here," Sam Mewis said of Kristie's one-year hitch in K.C. "I was too busy being a college student, I guess. But Kristie always had great things to say about Kansas City. Somebody mentioned that having a Mewis back would be great. And I was like, 'Oh, you'll have the Mewises back. My parents can't wait to come.'

"I hear only good things about Kansas City; everybody I've talked to has praised both the city and the ownership and the team. All the Mewises are excited to have a tie back to Kansas City."

HINGHAM — There's two sides to every coin. That's a good way to describe Thursday's game between the Hingham and Hanover High girls soccer teams. Both came into the match with undefeated records, ensuring that the play was going to be stellar. Unfortunately, someone's '0' had to go. Ultimately...
HINGHAM, MA・1 DAY AGO
The Associated Press

NEW YORK (AP) — The Baltimore Orioles knew the end was coming and had left the ballpark by the time they were mathematically eliminated from postseason contention when Cal Raleigh’s ninth-inning homer gave Seattle a 2-1 win over Oakland and the American League’s final wild-card spot. Baltimore arrived in New York needing to win its final six games while having Tampa Bay and Seattle lose all of theirs. Still, the Orioles’ 2-1 victory over the Yankees assured Baltimore would end its streak of five straight losing seasons. “We take pride in helping the young guy,” pitcher Jordan Lyles said Friday. “We got a lot of young talented guys here, excited, happy, fortunate to be a part of it. But as older guys we might not be here in the future but this organization, the city of Baltimore is definitely in good hands.”
BALTIMORE, MD・26 MINUTES AGO