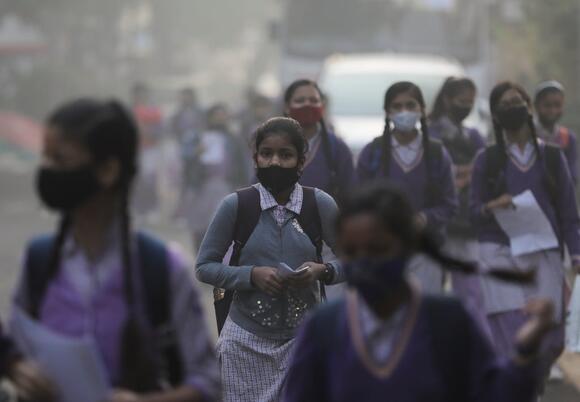 Two school managers have been charged by the police for allegedly drugging and molesting 17 tenth grade students in Muzaffarnagar district of the north Indian state of Uttar Pradesh .

Authorities have also set up an inquiry against some police officials over allegations that they tried to cover up the incident.

On 17 November, girl students of the 10th grade were reportedly asked to stay overnight for back-to-back practical exams and given food laced with sedatives before they were allegedly molested. Fourteen boys of the same class were not made to take this practical exam.

The police on Sunday registered a complaint on charges of criminal intimidation, intoxication, and molestation against two people — the manager of the girls’ school in the town of Purkazi and another manager of the school that the girls were taken to that night. The culprits have not been arrested even 20 days after the incident.

Raids are being conducted at possible hideouts, police superintendent Abhishek Yadav said in a statement.

According to the complaint by parents, the manager of the school contacted them on 17 November and told them that they will take the girls to a different school for a practical exam. All 17 girls fell unconscious during the night and returned home the next day.

They were allegedly warned not to talk to anyone about the incident and threatened that their family members would be killed if they did, according to reports.

“We have sent the in-charge of the police station concerned to the police lines and initiated a departmental inquiry against him. We are investigating the case and are hopeful of arresting the culprits soon,” a police officer said in a video statement.

He added that “a probe has been set up against police station Purkazi in-charge over allegations of negligence and the in-charge has been removed with immediate effect”. Authorities are also investigating the role of other police officers.

Parents have alleged that the police filed a formal case only after a local lawmaker of the ruling Bharatiya Janata Party, Pramod Utwal, intervened.

Mr Utwal blamed the delay in registering the complaint and arrests of the accused on the “lackadaisical attitude of the area police” and noted that the students were warned against speaking out.

“The girls are so terrified that they have not gone to school since the night of November 17,” Mr Utwal told The Indian Express . “We will ensure the strictest possible punishment for the accused. If they do not surrender in time, their families will also face the music.”

happened to me in ND by the police and excons but ya what's new. now they gangstalking me and gas lightning me. God has me tho so I'm OK.

A 13-year-old boy has been arrested on suspicion of rape after a 35-year-old woman was allegedly attacked in southeast London.Police were alerted after the suspect was “disturbed” and detained by a passer-by walking his dog on Winn’s Common, in Plumstead, on Tuesday at around 11pm. The boy’s accomplice, an as yet unidentified man, fled the scene.“Police were called shortly before 11pm on 21 December to reports … that a 35-year-old woman was raped by two males in bushes near to Lakedale Road SE18,” a Metropolitan Police spokesperson said.“A member of the public, who was walking his dog, disturbed the suspects and assisted in detaining one of them at the scene.”The spokesperson added that the detained teenager had been arrested on suspicion of rape, but was initially taken to hospital to be treated for an injury to his own finger – caused by a dog bite. He was then taken into custody.“Our enquiries continue,” the Met added in its statement.
PUBLIC SAFETY・24 DAYS AGO
KXLY.com | 4 News Now

SPOKANE, Wash.– The Spokane Police Department needs your help finding a man they say tried to lure a teenage girl into an alley near Rogers High School. Police said the man approached the girl around 10:20 a.m. Monday near Rockwell and Perry. He told her he had a gun and demanded she go with him into an alley. Then, at...
SPOKANE, WA・6 DAYS AGO
Insider

Former Parkland students sue school and county officials, alleging they knew the gunman was a threat and could have stopped the 2018 massacre

Four of the students alleged that they suffered "extreme mental anguish and associated psychological trauma" as a result of the shooting.
PARKLAND, FL・9 DAYS AGO
BBC

Two people have been arrested in Egypt after a teenage girl who was allegedly being blackmailed with digitally altered images killed herself. The sister of Basant Khaled, 17, told the Youm7 news website that fake photos of her had been published when she refused to go on a date with a youth.
PUBLIC SAFETY・13 DAYS AGO

SEA CLIFF, N.Y. (CBSNewYork) — There’s new video showing a Long Island woman who has no medical qualifications allegedly giving a teenager a COVID-19 vaccine. The two are not related, and the 17-year-old boy’s mother did not give her permission. The incident happened inside a Victorian-era Sea Cliff home on New Year’s Eve. The homeowner, 54-year-old Laura Parker Russo, can be seen in the video telling the teenager, “You’ll be fine, I hope.” “Here you go. At-home vaccine,” the teenager says. As CBS2’s Jennifer McLogan reports, officials say the teenager wanted the vaccine, but his parents were against it. Doctors called the incident “irresponsible” because the...
SEA CLIFF, NY・12 DAYS AGO
abc10.com

ELK GROVE, Calif. — Two teenagers were hurt after a shooting in Sacramento County. The Sacramento County Sheriff's Office said the shooting happened at Summer Sky Drive and Bastien Court, an area not far from Florin High School. Deputies responded after getting reports of a shooting around 3:40 p.m.
SACRAMENTO COUNTY, CA・10 DAYS AGO
The Independent

A father whose 12-day-old baby was killed by the family pet has admitted to being in charge of a dangerously out-of-control dog.Elon Jase Ellis-Joynes was mauled to death by the Chow Chow cross at his home in Doncaster in September 2020.Dad Stephen Joynes, 36, admitted the offence under the Dangerous Dogs Act during a hearing at Sheffield Crown Court on Thursday.Mother Abigail Ellis, 28, has denied the same charge and will appear at court again on 11 February when prosecutors will make a further decision on the case. A trial is provisionally set for July.The couple were both released on...
PUBLIC SAFETY・25 DAYS AGO

Suicides up among teenage girls

Tasting Table noted Kavarna's reputation as a community gathering place. Green Bay police chief believes gun violence study will bring change. "If you're going to implement a solution to a gun violence problem, first you have to have a really clear understanding of what the problem actually is." Alcohol-related deaths...
GREEN BAY, WI・3 DAYS AGO
The Independent

A teenager who sparked panic when he walked into a college carrying a gun and a knife has pleaded guilty.Sandijs Dreimanis, 18, pointed the imitation firearm at a member of staff and pulled the trigger during dramatic scenes at Crawley College in April 2020.He did so with the intention of being shot by armed police, prosecutors said previously.As dozens of firearms officers went to the scene, a teacher and their colleague tackled the teenager, sustaining minor injuries.No serious injuries were reported during the incident and a blank firing handgun and a knife were seized by police.Dreimanis appeared at Lewes Crown...
PUBLIC SAFETY・5 HOURS AGO
fox5atlanta.com

Sandy Springs police say a woman who was seeking legal representation was instead raped by that lawyer. He has since been arrested.
SANDY SPRINGS, GA・23 DAYS AGO
BBC

A woman who says she was raped by Jeffrey Epstein has told the BBC Ghislaine Maxwell was the "enforcer" in the sexual abuse that the pair carried out. Speaking to Andrea Catherwood on BBC Radio 4's Woman's Hour programme, Sarah Ransome described locking eyes with Maxwell in court. Maxwell, 60,...
PUBLIC SAFETY・16 DAYS AGO
Bring Me The News

A man has been arrested in Mexico 21 years after he fled Minnesota while facing charges for the sexual assault of a 14-year-old girl. Curtis Lee Brovold was arrested by Mexican Immigration Authorities and FBI agents stationed in Mexico while in Cancun Wednesday. According to Moorhead PD, detectives and the...
MOORHEAD, MN・4 DAYS AGO
The Guardian

Nicholas Rossi, 34, whose alias was supposedly cremated, was caught after needing treatment for Covid
PUBLIC SAFETY・2 DAYS AGO
The Independent

A police officer who shared a photo of a partially-clothed dead woman on WhatsApp has been sacked for the “deplorable” act.PC Daniel Wallwork, from Avon and Somerset Police, was sent to an address in Radstock, Somerset, on 16 April 2020 following the sudden death of a woman in her 40s.While at the property, he used his personal phone to take a photo of the woman as she lay partially clothed and face down on a bed before sending it to a colleague.The accompanying message read: “After all these years I’ve finally met [her].”PC Wallwork claimed he sent the image to...
LAW ENFORCEMENT・4 DAYS AGO
The Guardian

A mother and father who caused the death of their nine-day-old baby have been jailed for a total of 18 years.Daniel Nolan, 30, was handed a 10-year sentence and Sophie Nash, 31, was jailed for eight years on Friday.The pair had been found guilty of causing or allowing the death of their nine-day-old baby Ava Grace, two counts of causing or allowing serious injury to her and child cruelty.Police were called by paramedics on 16 August 2017 after tiny Ava, then just eight days old, was reported to be unresponsive at an address in Nelson, Lancashire.Ava was taken to Royal...
PUBLIC SAFETY・1 DAY AGO
The Independent

A violent ex-partner travelled 28 miles on foot to stab a mother and her young autistic son to death in front of a distressed baby before leading police on a 24-hour manhunt, a court was told.Daniel Boulton, 30, is alleged to have knifed his former girlfriend Bethany Vincent and her nine-year-old son Darren Henson, also known as DJ, “numerous times” while the subject of a restraining order at around 8pm on May 31 last year.Boulton developed a “hatred” for Darren and walked from his address in Skegness to Ms Vincent’s home in High Holme Road in Louth Lincolnshire ...
PUBLIC SAFETY・4 DAYS AGO
Insider

Nicholas Rossi faked his own death and was living off-grid until he became dangerously ill with COVID-19 in Scotland. He now faces a rape trial in Utah.
PUBLIC SAFETY・1 DAY AGO