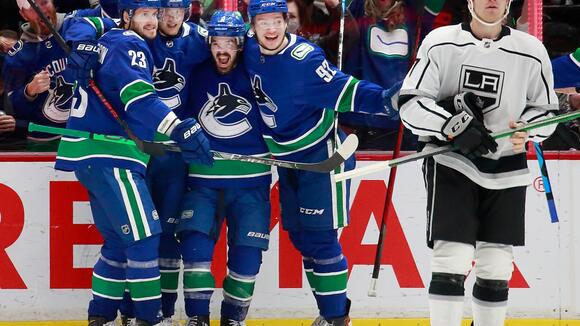 VANCOUVER (AP) — Bruce Boudreau got his first win as coach of the Canucks on Monday as Vancouver blanked the Los Angeles Kings 4-0.

Vancouver’s Thatcher Demko had 30 saves to collect his first shutout of the season and the second of his career. Brock Boeser and J.T. Miller each had a power-play goal and an assist for Vancouver, while Conor Garland and Juho Lammikko also found the back of the net.

Cal Petersen had 27 saves for the Kings, who beat the Oilers 5-1 in Edmonton on Sunday. 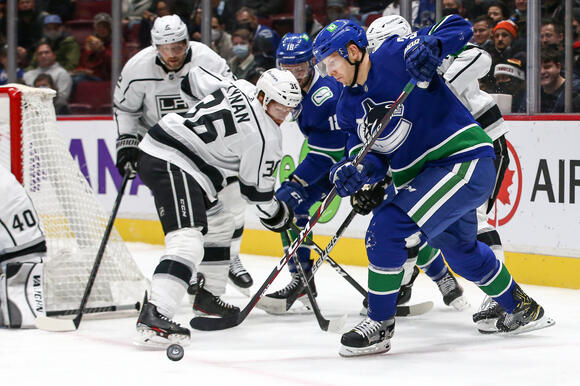 Special teams have been a struggle for the Canucks this season, but Vancouver went 2 for 4 on the power play Monday and successfully weathered two penalties.

The Kings’ Lias Anderson was called for high-sticking on Oliver Ekman-Larsson midway through the third and Miller capitalized on the man advantage. His shot from inside the faceoff circle careened into the net off the crossbar with about 7 minutes left put Vancouver up 4-0.

Lahmmikko gave the Canucks their third goal of the night 6:59 into the period, picking off an errant Kings pass and putting a shot past Petersen stick-side for his first goal in a Vancouver jersey. The 25-year-old left-winger was a healthy scratch in the previous five games.

The Canucks went up a pair 5:43 into the middle frame. Rookie Vasily Podkolzin put a shot wide with the puck ricocheting off the end boards. Garland picked up the rebound behind the net and wrapped it into yawning net before Petersen could get back in position.

A power-play goal opened the scoring early in the second after Los Angeles’ Mikey Anderson was called for tripping Bo Horvat. Stationed at the goal line, Tanner Pearson sliced a pass to Boeser at the top of the faceoff circle. The right-winger uncorked a snap shot and the puck deflected in off the skate of Kings defenceman Drew Doughty in front of the net.

The goal was Boeser’s fifth of the season and his first in 14 games.

Monday was the first time Kings defenseman Alex Edler had returned to Vancouver since signing with LA in July. The 35-year-old played 15 seasons in Vancouver and holds a number of franchise records for the Canucks, including most games played by a defenseman (925), and most goals (99), assists (310) and points (409) by a defenseman.

The club recognized Edler with a video tribute during early in the first period, and the veteran blue liner hopped over the boards to wave to the cheering crowd.

NOTES: Boudreau previously coached for the Capitals, Ducks and Wild, and won the Jack Adams Award as the league’s top coach while with Washington in 2008. … Garland now has eight goals on the season. Miller leads the Canucks with nine. … Vancouver extended its win streak over L.A. to six games.

(© Copyright 2020 The Associated Press. All Rights Reserved. This material may not be published, broadcast, rewritten or redistributed.)

Elias Pettersson did not register a shot Sunday. This advertisement has not loaded yet, but your article continues below. In Vancouver, this can be considered breaking news for an offensively challenged club that leans heavily on its stars players. And in a hockey-mad city that either idolizes or trashes the...
NHL・2 DAYS AGO
Yardbarker

‘What he’s preaching suits my game’: Jack Rathbone is excited to play for Bruce Boudreau but first needs to find a rhythm in his own game

It’s been a difficult ride through the first half of the season for the Vancouver Canucks’ top prospect, Jack Rathbone. The 22-year-old offensive defenceman made the NHL team out of camp but was sent down to the AHL at the beginning of November. A lot has changed with...
NHL・1 DAY AGO
93.7 The Fan

you can’t beat them, join them! And by “join them” we mean take all of their players. On their current roster, the Washington Capitals carry four former Pittsburgh Penguins.
NHL・1 DAY AGO

He said it initially it was a head-shot and after having time to watch it, Pens head coach Mike Sullivan questions why the league won’t punish the hit on Teddy Blueger
NHL・2 DAYS AGO
Sportsnaut

The NHL took time to celebrate Flyers defenseman Keith Yandle after he broke the league’s ironman record at UBS Arena with his 965th straight game.
NHL・1 DAY AGO

37-year-old center Jeff Carter came to the Pens in April, he’s made such an impression, he received a contract extension after 12 goals & 14 assists this year
NHL・1 DAY AGO
Sportsnaut

With only eight games remaining between Thursday and the end of February, the Tampa Bay Lightning will look to get
NHL・1 DAY AGO
CBS Boston

By Michael Hurley, CBS Boston BOSTON (CBS) — It’s early in the Tuukka Rask 2.0 Era for the Boston Bruins, but the results have been discouraging thus far. Rask fell to 2-2 in his four starts since rejoining the Bruins this month with a 5-3 loss to the Ducks on Monday night. Rask allowed five goals on just 27 shots faced, sinking Boston’s chances in what ended up as just the Bruins’ third loss of the month. Never one to shy away from a bad performance, Rask spoke with the media after the game and matter-of-factly explained his level of play. “Obviously,” Rask said, “I...
NHL・2 DAYS AGO
Sportsnaut

Nico Sturm had a goal and two assists, Connor Dewar scored his first career goal and had an assist, and
NHL・2 DAYS AGO

NEW YORK (AP) — Adam Fox scored the deciding goal in the sixth round of a shootout and the New York Rangers beat the Los Angeles Kings 3-2 on Monday night for their ninth win in 12 games. Chris Kreider got his NHL-leading 30th goal, Barclay Goodrow also scored and Artemi Panarin had two assists as New York won its fifth straight at home. Igor Shesterkin stopped 28 shots to pick up his 20th win of the season. Blake Lizotte and Alex Iafallo scored in the second period for Los Angeles. Jonathan Quick stopped 34 shots as the Kings lost for the...
NHL・2 DAYS AGO
Itemlive.com

Erik Haula has played well centering Taylor Hall and David Pastrnak so far, but the Boston Bruins could still be in the market for a second-line center upgrade before the trade deadline. Here are five potential targets.
NHL・1 DAY AGO

Following a promising stretch, the San Jose Sharks have struggled of late. Meanwhile, the Washington Capitals’ issues have spanned throughout
NHL・2 DAYS AGO
oilersnation.com

The Oilers are back in action tonight and will be looking to win their second straight game as they take on the Vancouver Canucks. Edmonton is coming off a massive win over the Calgary Flames on Saturday night that snapped them out of their six-game winless streak. Now, they’ll look to continue their dominance against the Pacific Division and win their third game of the season against the Canucks. Myself and Caroline give you everything that you need for the game with another Sherwood Ford GIANT Pre-Game Show LIVE on our Youtube channel!
NHL・2 DAYS AGO
Sportsnaut

The Columbus Blue Jackets activated defenseman Adam Boqvist from the NHL’s COVID-19 protocol Wednesday. Boqvist, who has missed the past
NHL・1 DAY AGO