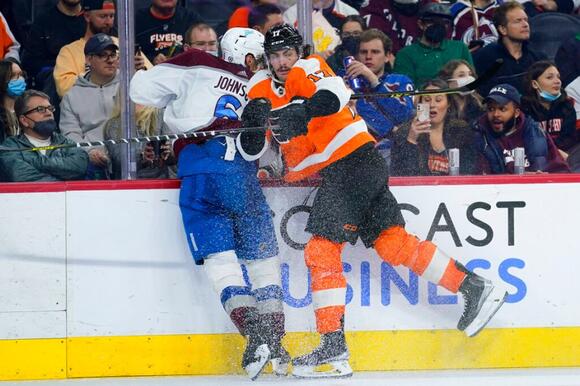 PHILADELPHIA (AP) — Erik Johnson had a goal and an assist, and the Colorado Avalanche got goals from six other players in the 7-5 win over the Philadelphia Flyers on Monday night.

Earlier in the day, the Flyers fired Alain Vigneualt after he went 147-74-54 in two-plus seasons and Mike Yeo stepped up as interim coach. Vigneault led the Flyers to the top seed in the Eastern Conference in 2019-20, but they missed the playoffs last season. General manager Chuck Fletcher made the move following Philadelphia’s 7-1 home loss to Tampa Bay on Sunday night.

Fletcher also let go of assistant coach Michel Therrien, who oversaw a power play that entered 30th in the NHL at 13.4%.

Giroux said before the game that the Flyers had no identity.

“We have a lot of things to figure out, a lot of things to work on,” he said. “I doubt that we’re going to solve all of them tonight. But for tonight, go out there tonight in front of our fans, work our butt off and do everything we can to get a win.”

The Flyers may have worked hard, but the result was all too familiar.

Giroux’s slap shot from the slot gave the Flyers a 1-0 lead 6:02 in, but the Avalanche zipped past Philadelphia with speed and skill for four straight goals, culminating with Makar’s rush into the Flyers zone past defenseman Ivan Provorov that he finished with a wrister past goalie Martin Jones on the glove side.

It looked as if Colorado was on its way to a repeat of Tampa Bay’s lopsided victory Sunday, but the Flyers closed the first period with a pair of goals, on Lindblom’s first in 22 games this season and Giroux’s second of the night on a one-timer on the power play.

Philadelphia entered with just nine goals in 67 chances on the man-advantage before scoring a pair in the high-scoring opening period.

The scoring calmed down in the second, as Colorado got the only tally by Nichushkin 1:42 into the period.

The two-goal margin was plenty for the high-scoring Avalanche, who entered leading the NHL in goals per game at 4.00. Philadelphia has struggled to put the puck in the net all season and entered with 34 fewer goals than the Avalanche in one more game played.

The Flyers had gone 17 consecutive games with three goals or fewer before Atkinson’s tally on a one-timer from close range 2:16 into the third pulled Philadelphia to 5-4. Philadelphia last scored more than three goals on Oct. 27.

Kadri restored the two-goal lead with a power-play goal 3½ minutes later for his team-leading 31st point.

Justus Annunen, playing in his second career game, made 27 saves for the Avalanche.

Pavel Francouz made 34 saves for his second career shutout, Nazem Kadri had a goal and an assist and the Colorado Avalanche picked up a point in their 10th straight game by defeating the Anaheim Ducks 2-0.
NHL・6 DAYS AGO
FOX31 Denver

Nikola Jokic had 28 points, 21 rebounds and nine assists, and the Denver Nuggets beat the Detroit Pistons 110-105 on Tuesday.
NBA・20 HOURS AGO
FOX31 Denver

The Colorado Avalanche beat the Chicago Blackhawks 2-0 on Monday night to extend their franchise-record home winning streak to 16 games.
NHL・1 DAY AGO
Sportsnaut

With a 2-0 victory over the Chicago Blackhawks on Monday, the Colorado Avalanche stretched their home winning streak to 16 games. It’s another win when the Avalanche weren’t at their best, but they did enough to get the job done – which they’ve done a lot recently. Goals from Nazem Kadri in the second period and Mikko Rantanen in the third were enough to lift the Avs to the top of the NHL standings.
NHL・1 DAY AGO
Yardbarker

In the latest edition of Elliotte Friedman’s 32 Thoughts blog, he raised the possibility that Claude Giroux, the captain of the spiraling Philadelphia Flyers, could find his way to Denver via trade. He suggested that several of the Colorado Avalanche’s key players were interested in acquiring the veteran forward but that coordinating a deal without the help of a third party could prove difficult. Even in his 15th NHL season, Giroux is proving that he still has plenty left in the tank and could bolster the championship hopes of several Stanley Cup contenders, should he so choose. Let’s dig into why a Giroux trade benefits the Avalanche and whether the franchise possesses both the requisite cap space and cache of assets to facilitate a realistic swap.
NHL・10 HOURS AGO
Yardbarker

3 Takeaways From the Islanders 4-3 Win Over the Flyers

The New York Islanders defeated the Philadelphia Flyers on Tuesday night 4-3, their third win in eight days against the Flyers. Moreover, it was the Islanders’ 15th win of the season as they continue to make up ground in the Metropolitan Division standings and leaped into sixth place. The...
NHL・4 HOURS AGO

Erik Haula has played well centering Taylor Hall and David Pastrnak so far, but the Boston Bruins could still be in the market for a second-line center upgrade before the trade deadline. Here are five potential targets.
NHL・14 HOURS AGO

Pavel Francouz had 24 saves for his second shutout in as many starts, and the Colorado Avalanche beat the Chicago
NHL・1 DAY AGO
USA TODAY

Vegas Golden Knights winger Reilly Smith is one of the hottest names leading up to the NHL trade deadline. With
NHL・2 DAYS AGO
WFAN Sports Radio

Ryan Pulock has now missed 22 games and counting with a lower body injury, but if there’s a silver lining to his absence, Peter Schwartz writes that it’s the emergence of Robin Salo and Noah Dobson.
NHL・2 DAYS AGO
Itemlive.com

This past week, the Boston Bruins honored Willie O’Ree by retiring his No. 22 and lifting it high into the TD Garden rafters. But that is not enough. O’Ree was The post Minton: The NHL needs to retire Bruins legend Willie O’Ree’s number appeared first on Itemlive.
NHL・2 DAYS AGO
San Diego Union-Tribune

Justin Faulk had a goal and an assist and the St. Louis Blues beat the undermanned Vancouver Canucks 3-1
NHL・2 DAYS AGO
Sportsnaut

The Pittsburgh Penguins are proving that it’s never wise to count them out. Not in games. Not in the chase
NHL・2 DAYS AGO
San Diego Union-Tribune

David Quinn is getting a second chance at the Olympics as the coach of the U.S. men's hockey team
HOCKEY・2 DAYS AGO