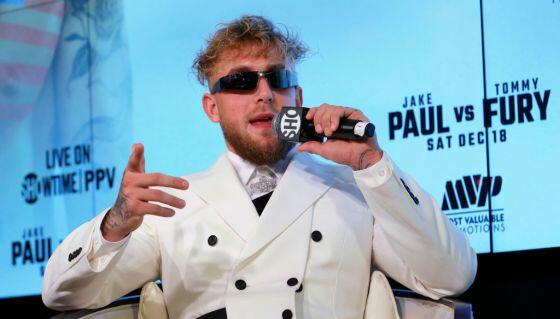 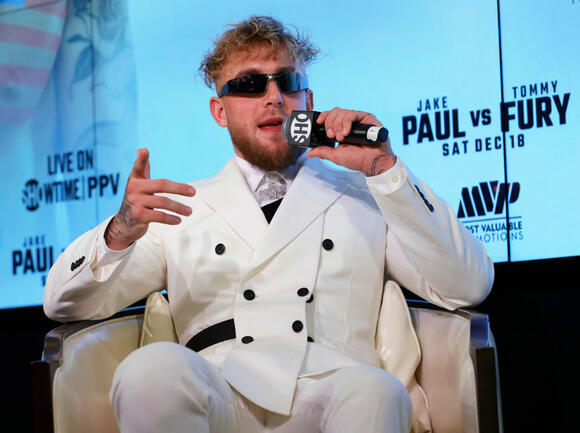 If the people want a fight, then a fight is what they will get.

At least that seems to be the mindset of web personality/celebrity boxer Jake Paul . He was scheduled to face off against Tyson Fury in the ring, but those plans have changed, as the Cleveland native now has a rematch set against Tyron Woodley.

|| RELATED: The Game Threatens To Beat Up Jake Paul In LA ||

|| RELATED: Mayweather and Jake Paul Get Into Physical Altercation At Press Conference ||

For his part, Tyson Fury cited an infection and bodily injury as the reason he withdrew from his scheduled bout against the YouTube star.

For those keeping track of Paul’s antics/fights, you may recall that on August 29 Paul defeated Woodley by split decision.

The match suffered its fair share of criticism, and both combatants agreed in the ring after the fight to spar again if Woodley got a tattoo on his body that read “I love Jake Paul.” Being a man of his word, Woodley got the ink (on his left middle finger).

“The rematch, it always made sense,” Paul said . “It didn’t make as much sense as me fighting Tommy Fury fight then and there. [Woodley is] ready, and he did get the tattoo. He was the only one on the list really that can sell pay-per-views. I can’t just go in there and fight some journeyman like most of these boxers do.”

Showtime, set to air the fight, has named the Paul/Woodley rematch “Leave No Doubt.” Identical to the Paul-Fury bout, the Paul vs Woodley sequel will be an eight-round, 192-pound catchweight event.

Get Breaking News & Exclusive Contest in Your Inbox:

Close Thank you for subscribing! Please be sure to open and click your first newsletter so we can confirm your subscription. Email [ione_media_gallery src="https://zhiphopcleveland.com" id="5191831" overlay="true"]

Boxing legend Mike Tyson has dismissed reports that he has reached a ‘verbal agreement’ over a lucrative super-fight with YouTuber-turned-boxer Jake Paul. The 55-year-old American superstar made his blockbuster return to the squared circle against fellow boxing legend Roy Jones Jr in an eight-round exhibition fight. Tyson had...
COMBAT SPORTS・2 DAYS AGO
The Independent

A potential fight between Mike Tyson and Jake Paul in Las Vegas is unlikely to be sanctioned.Former UFC champion Michael Bisping believes that strict rules set by the Nevada State Athletic Commission mean that an exhibition encounter will not be licensed. Paul and Tyson are said to be in discussions over a bout, with organisers hoping a clash between the Youtube personality and former undisputed heavyweight champion could generate £36million if held in the American city.Yet Bisping, a former UFC middleweight champion, does not think it would be approved even as reports suggest a verbal agreement between the pair may...
COMBAT SPORTS・21 HOURS AGO
Cassius

"You ain't trying to hot box with me, I swing hard liquor Going down by the second round, all hail the underground" Xzhibit, "Bitch Please"
COMBAT SPORTS・1 DAY AGO
hotnewhiphop.com

Pete Davidson has been the recent target of Kanye West as Davidson is now infamously dating the likes of Kim Kardashian. For the most part, Davidson has been very respectful throughout this whole ordeal, although he has been frequently spotted in public alongside Kim K. As a result of this new union, Kanye has singled out Pete in his music. For instance, in his brand new song with The Game called "Eazy," Kanye raps "god saved me from that crash/just so I could beat Pete Davidson's ass."
CELEBRITIES・11 HOURS AGO

The moment Jake Paul knocked out Tyron Woodley was so shocking that many claimed Woodley took a dive. It seemed like the only explanation for a UFC champion to get knocked out by a YouTuber. Tyron Woodley recently went on The MMA Hour and addressed the claims he took a...
UFC・8 HOURS AGO
Las Vegas Herald

Former multiple-time UFC title challenger Chael Sonnen has been served with five battery citations stemming from a recent incident in which he allegedly beat up five separate people during a furious row in a Las Vegas hotel. Retired fighter Sonnen, 44, who has become one of mixed martial arts' more...
LAS VEGAS, NV・29 DAYS AGO
The Independent

Following one of the most successful and engrossing years in the history of the UFC, the mixed martial arts promotion will look to keep building in 2022.2021 saw Conor McGregor fight twice, marking his most active year since 2016. The Irishman lost to Dustin Poirier in each outing, suffering a horrific broken leg in the most recent, but he is targeting a summer return to the Octagon.Elsewhere, newer stars like Israel Adesanya, Khamzat Chimaev and Sean O’Malley will look to further enhance their legacies and profiles, while featherweight queen Amanda Nunes will surely seek to regain her bantamweight belt...
UFC・2 DAYS AGO
The Independent

Francis Ngannou is a fighting phenomenon: the honorary ‘baddest man on the planet’ as UFC heavyweight champion, and the most ferocious power-puncher in the promotion’s history.The French-Cameroonian’s professional mixed martial arts record stands at 16-3, while his UFC record is 11-2 since his debut in 2015 – with 10 of those wins coming via knockout or TKO.Ngannou, 35, in fact went 6-0 in the company, with five of those victories achieved via KO/TKO and one coming via submission, before he suffered back-to-back decision losses.The first of those two defeats was a humbling by then-champion Stipe Miocic, but Ngannou worked...
UFC・2 DAYS AGO

Vince McMahon Has Reportedly Given Up On Pushing Former Universal Champion

You never know what might happen when you watch an episode of Monday Night Raw, and this week fans saw former Universal Champion Finn Balor return to WWE programming. Balor returned to face Austin Theory in a singles match, and it was Theory who picked up the win when he pinned Balor clean in a match that only lasted six minutes. After the match Austin Theory continued to disrespect Balor by attacking him.
WWE・1 DAY AGO
Robb Report

The robe Muhammad Ali wore before one of the most important fights of his career could soon be yours. The garment the Greatest wore to the final weigh-in and while walking out for his 1965 fight with Sonny Liston is currently up for sale on Goldin Auctions. The robe isn’t just noteworthy because it was worn before the boxer’s second heavyweight title bout, but also because it’s the first that bore the name he’d go by for the final 52 years of his life. Ali wore the robe, which is made of white terry cloth and has “Muhammad Ali” stitched in red...
COMBAT SPORTS・1 DAY AGO
Sportsnaut

Many UFC fans have likely been typing Nate Diaz next fight recently in their MMA Google searches, as they wonder
UFC・14 HOURS AGO
The Independent

Tyson Fury has mocked Anthony Joshua and maintains Oleksandr Usyk will “smash” him in their heavyweight world title rematch.Joshua is still destined for shot at winning back the WBA (Super), WBO and IBF titles that Usyk took back in September last year.While Fury continues to wait for the politics of the sport to play out ahead of a probable mandatory title defence against Dillian Whyte, despite purse being bids delayed again.But despite no prospect of Fury and Joshua fighting any time soon, Fury reacted angrily after Derek Chisora tipped Joshua to beat him, with the WBC title holder maintaining...
COMBAT SPORTS・1 DAY AGO

ESPN commentator Stephen A. Smith returned to "First Take" to detail his fight with Covid-19, which he says nearly killed him.
COMBAT SPORTS・1 DAY AGO
The Independent

Francis Ngannou would relish the opportunity to go head-to-head with Tyson Fury in his next fight.The 35-year-old UFC heavyweight champion faces former team-mate Ciryl Gane in a unification bout in Anaheim California at the weekend, but would take to the octagon with WBC champion Fury having challenged him to a contest wearing MMA’s lighter gloves.Asked if everything goes to plan against Gane whether he would rather face him or defend his title against Jon Jones in his next fight, the Predator told a press conference: “If you give me the two options, I would choose fighting Tyson Fury.One of...
UFC・14 HOURS AGO
mmanews.com

If you’re interested in seeing a boxing match between Jake Paul and Mike Tyson, don’t get too excited. The boxing legend recently took to social media to deny reports of a potential fight between them. Tyson took to Twitter on Monday in response to a report, stating that he didn’t even know about this matchup. He also claimed he recently saw Paul in person and that discussions of a fight didn’t come up.
COMBAT SPORTS・2 DAYS AGO
Sports Illustrated

Moxley will make his return on Wednesday’s “Dynamite”, his first televised appearance in more than two months.
WWE・1 DAY AGO
stillrealtous.com

Over the last two years fans have seen many WWE Superstars come and go, and in 2021 fans saw Eva Marie make her return to WWE programming. In the weeks leading up to Eva Marie’s return WWE started airing vignettes showing that Eva Marie would be returning with pink hair, but the former WWE star revealed on social media that she recently dyed her hair red.
WWE・2 DAYS AGO
The Independent

Eddie Hearn has suggested that the fight between Tyson Fury and Dillian Whyte is now unlikely to happen in March, with the purse bids delayed until Friday.Whyte, the mandatory challenger for Fury’s WBC heavyweight title, has so far been unable to agree terms after the WBC ruled that the champion would take 80% of the purse.Fury’s co-promoter Frank Warren had suggested a target date of 26 March for the high-profile heavyweight battle, but Hearn believes that is now unlikely.Speaking to the 5 Live Boxing podcast, Hearn said: “People keep talking about March dates - that’s starting to look unrealistic for...
COMBAT SPORTS・1 DAY AGO
MMA Fighting

The Mixed Martial Arts Hour is back in your life! Below is a rundown of Wednesday’s show, which begins at 1 p.m. ET / 10 a.m. PT / 6 p.m. GMT. 1 p.m. ET: UFC featherweight standout Ilia Topuria opens the show to break down his UFC 270 meeting with Charles Jourdain.
UFC・20 HOURS AGO
thefocus.news

The tennis player has been knocked out in the second round of the 2022 Australian Open, although he was fresh off his first ATP Tour title. We look at Tommy Paul’s girlfriend, Kiki Passo, who used to date Ohio State football star Tate Martell. Tommy Paul is an American...
NFL・23 HOURS AGO