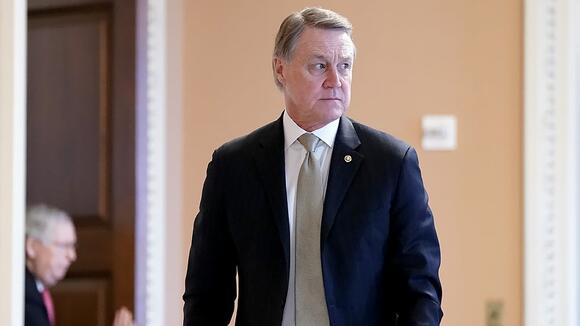 Former President Trump endorsed former Sen. David Perdue (R-Ga.) in Georgia's gubernatorial GOP primary, a contest that is shaping up to be one of the most competitive political battles of the 2022 election cycle.

"David Perdue has my Complete and Total Endorsement. He will not let you down!" Trump said in a statement Monday evening.

Purdue’s entry into the race marked a win for Trump, who had long looked for a strong candidate to take on current Georgia Gov. Brian Kemp , who had infuriated Trump when Kemp declined to support the former president’s effort to overturn his 2020 presidential loss in Georgia.

In his campaign announcement, Perdue, who lost his Senate seat in a January runoff election, said he expected to hit Kemp over the results of the 2020 presidential election.

Stacey Abrams, the voting rights activist and 2018 nominee for governor, is the only Democrat to have entered the state's gubernatorial race so far.

In his statement on Monday evening, Trump said, "Kemp has been a very weak Governor—the liberals and RINOs have run all over him on Election Integrity, and more," using an acronym for "Republican in name only."

"Most importantly, he can’t win because the MAGA base—which is enormous—will never vote for him," Trump said.

"David Perdue will eliminate the Income Tax, secure the Elections, defend the Second Amendment, support our great Farmers, get crime in Atlanta and other places under control, take care of our great Vets, and put parents back in charge of the schools," Trump added.

Trump has also thrown his support behind NFL star Herschel Walker who is running against Sen. Raphael Warnock (D-Ga.).

Stacey Abrams used a Wednesday campaign stop in Atlanta to applaud the push for voting rights in Congress and express support for President Joe Biden Abrams was noticeably absent from Biden's visit last week to Atlanta, where he called for an end to the filibuster to pass voting legislation. An aide blamed a scheduling conflict, and in a statement released after Biden spoke, Abrams said she welcomed his commitment to changing the filibuster for voting bills.On Wednesday, Abrams said she was a “proud Democrat, and President Joe Biden is my president.” She took questions from the media at...
PRESIDENTIAL ELECTION・23 HOURS AGO
Newsweek

One political scientist told Newsweek that the apparent feud between Trump and DeSantis was "a fine mess" that could seriously damage the Republican Party.
POTUS・1 DAY AGO
arcamax.com

Former U.S. Sen. David Perdue wants to be Georgia’s next governor. Perdue is challenging fellow Republican incumbent Gov. Brian Kemp for the party nomination in a primary. “I believe and a lot of people in Georgia believe that our governor let them down. Turned our election over to Stacey Abrams and because of that we have a very split conservative party on the republican side in Georgia,” Perdue said during an exclusive interview with WJCL 22 News. “The question is who can better bring the party together on the Republican side? Is it Brian Kemp who caused this fissure? Or me?” Perdue asked.
SAVANNAH, GA・14 HOURS AGO

EXCLUSIVE: Former GOP Sen. David Perdue of Georgia, who is primary challenging Republican Gov. Brian Kemp in this year's election, is rolling out a plan to create an Election Law Enforcement Division in the Peach State. "What happened in 2020 should never happen again," Perdue said on Thursday morning as...
GEORGIA STATE・6 HOURS AGO
NBC News

WASHINGTON — When former President Donald Trump headlined a fundraiser for the House Republicans' campaign arm in Tampa, Florida, in November, Rep. Gus Bilirakis, R-Fla., seized the opportunity of a face-to-face encounter to ask for Trump's endorsement. "Yes, yes, yes," Trump replied. Then he said he would talk to...
PRESIDENTIAL ELECTION・5 DAYS AGO
WSB Channel 2 Atlanta

ATLANTA — Former U.S. Sen. David Perdue rocked the state’s Republican party in early December when he decided to get into the governor’s race. He’ll have to beat out current Republican Gov. Brian Kemp in the primary to win a shot to face Democrat Stacey Abrams in the fall.
GEORGIA STATE・6 DAYS AGO

Gov. Brian Kemp named two allies to Georgia’s Board of Regents on Wednesday in a move that could jumpstart the stalled search for a new chancellor for its public university system. Kemp named longtime businessmen Richard “Tim” Evans and Jim Syfan to the powerful 19-member board, replacing Kessel D....
GEORGIA STATE・7 DAYS AGO
Savannah Morning News

Georgia's 2022 governor's race will be especially interesting, with two of the state's most prominent Republicans facing off in a primary ahead of a showdown with Democrat Stacey Abrams in the general election. And 1st District Rep. Buddy Carter isn't picking sides in the GOP primary. Carter says he respects...
GEORGIA STATE・10 DAYS AGO
tennesseestar.com

Politicians love to call themselves “outsiders.” Few claim the mantle of “outcast.”. Making his first stop in Cobb County since announcing his run for governor, Republican and former U.S. Sen. David Perdue acknowledged the eyebrows he's raised jumping into a primary race that, a little more than a month ago, had appeared to belong to incumbent Brian Kemp.
COBB COUNTY, GA・11 DAYS AGO

Former Georgia Sen. David Perdue is criticizing a bill that supports Gov. Brian Kemp's campaign efforts and accusing the latter of silencing those that want to challenge him. According to reports, Perdue filed a lawsuit challenging the constitutionality of Senate Bill 221 that paves the way for Kemp and other state legislative leaders to set up leadership funds or committees that are allowed to spend unlimited amounts of cash during the campaign period.
GEORGIA STATE・13 DAYS AGO
Newsweek

A former Republican congressman has argued Florida governor Ron DeSantis would be far more “dangerous” as the standard-bearer of the Republican base.“Ron DeSantis is far more dangerous than Donald Trump,” former Florida representative David Jolly told MSNBC on Tuesday. “He’s more savvy. He’s more coy. And he doesn’t have the pitfalls that Donald Trump does.”The one-term congressman, formerly a Republican and now an independent, lashed out at the Florida governor, one of the most popular Republicans in the country, lambasting his handling of the Covid crisis, critical race theory, voting rights, and other matters in the state.“Florida’s not free...
PRESIDENTIAL ELECTION・17 HOURS AGO
MarketWatch

These are the Senate races worth tracking, according to the nonpartisan Cook Political Report, as 34 seats in the 100-member chamber are up for grabs this year.
PRESIDENTIAL ELECTION・4 HOURS AGO
Newsweek

Amid reports of hostility between Trump and DeSanits, a spokesperson for the Republican governor told Newsweek such talk is a "fabricated media narrative."
POTUS・2 DAYS AGO
The Independent

Facing stark criticism from civil rights leaders, senators return to Capitol Hill under intense pressure to change their rules and break a Republican filibuster that has hopelessly stalled voting legislation.The Senate is set to launch debate Tuesday on the voting bill with attention focused intently on two pivotal Democrats — Kyrsten Sinema of Arizona and Joe Manchin of West Virginia — who were singled out with a barrage of criticism during Martin Luther King Jr. Day events for their refusal to change what civil rights leaders call the “Jim Crow filibuster.”Martin Luther King III the son of the...
PRESIDENTIAL ELECTION・2 DAYS AGO