Death Cab For Cutie Put Their Spin On This Holiday Classic 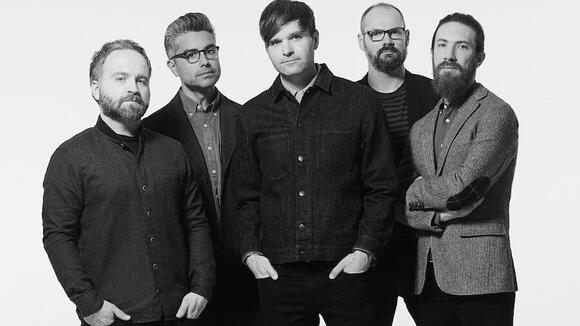 The song has been covered by the likes of U2, Mariah Carey, Jon Bon Jovi, Joey Ramone, Michael Buble, Smashmouth, The Offspring, Dropkick Murphys and so many other artists, but Death Cab For Cutie put a spin on the iconic track that makes it distinctly theirs.

Earlier this year, singer/guitarist Ben Gibbard told fans that the band was working on new music . "We’re working on a new record that I’m very excited about and I hope that we can be in a place to not only record the record properly and get it out to you guys as soon as possible but then also we can be out playing shows and play some new songs because these songs are way better with the other four dudes," he said at the time.

Though they have yet to detail the new project or 2022 tour dates, they are set to play a couple festivals next year.

Eldredge hopes the song will help listeners find “some light in times of darkness.”
MUSIC・3 DAYS AGO
AFP

There must have been something in the water in 1972 -- there almost certainly was for these guys. It was a year that spawned several instant Americana classics -- and one that was seemingly beamed down from outer space -- that came to define rock music and set the template for the sexy, seedy decade to come. For guitarist Keith Richards, it was the definitive Stones record.
ROCK MUSIC・2 DAYS AGO

After a “hard couple of years,” frontman Dan Reynolds told the crowd to "just unwind (and) let go of all the stresses" during the band's high-energy set.
LOS ANGELES, CA・1 DAY AGO
iHeartRadio

Filming one of the scenes “…seemed like a dungeon, I swear.”
MUSIC・4 DAYS AGO
iHeartRadio

Bastille Unveils The Next Song On 'Wildly-Ambitious' New Album

The full album is slated to release next month.
MUSIC・11 HOURS AGO

Måneskin Left The Crowd 'Beggin' For An Encore At ALTer EGO

After a massive breakout year in 2021, Måneskin kicked off 2022 with a knockout performance at ALTer EGO.
LOS ANGELES, CA・1 DAY AGO
The Independent

23 of the funniest misheard song lyrics, from Adele to Foo Fighters

We all have that friend who belts out the wrong lyrics to songs when they play on the car radio or on a night out.If this doesn’t sound familiar to you, then sorry but you probably are that friend.Don’t worry, from mixing up romantic sentiments with items of food to mistaking meaningful declarations for sexual innuendos, mishearing song lyrics is just part of what it is to be human.Of all the lyrics in our round-up, it was songs by Ariana Grande, Elton John, Taylor Swift and Jimi Hendrix that people most often got mixed up. Check out the funniest examples...
MUSIC・16 HOURS AGO
Variety

Jon Lind, A&R Exec and Writer of Hits for Earth, Wind & Fire, Madonna and Others, Dies at 73

Jon Lind, writer of hits for Earth, Wind & Fire, Madonna, Vanessa Williams and others, passed away Saturday after a two-year battle with cancer, his attorney, Jeremy Rosen, has confirmed. He was 73. Lind’s catalog, in which Primary Wave acquired a majority stake last year, included such songs as “Boogie Wonderland” and “Sun Goddess” by Earth, Wind & Fire, “Save the Best for Last” by Vanessa Williams and “Crazy for You” by Madonna, the latter two of which reached No. 1 on the Billboard Hot 100. “Save the Best for Last” was named ASCAP’s Song of the Year in 1992 and...
MUSIC・1 DAY AGO
iHeartRadio

For her new Chamberlain Coffee launch, the YouTuber takes on the NYLON 19. When Emma Chamberlain announced the launch of her first-ever business Chamberlain Coffee at the end of 2019, it was one of the most unexpected yet extremely on-brand news from the YouTuber-turned-entrepreneur. Oftentimes those with as high of an influential status as Chamberlain — a combined following of 26.1 million on YouTube and Instagram, to be exact — would expand into merch (which she’s already done) and a big fashion deal (hello, Louis Vuitton) and call it a day, but for Chamberlain, running a full-fledged coffee business has been a genuine and fulfilling passion project.
BEAUTY & FASHION・10 DAYS AGO
GlobalGrind

Kenneth Gamble and Leon A. Huff helped shape the sound of soul in the '70s with their work as a songwriting duo, who also had their own label, Philadelphia International Records. Their relevance continues today, thanks in part to their music constantly being sampled by everyone from Meg Thee Stallion to Drake.
MUSIC・3 HOURS AGO
iHeartRadio

Måneskin's year is off to a good start!
ENTERTAINMENT・4 HOURS AGO
iHeartRadio

Chris Cornell's Kids Toni And Christopher Are Writing Music Together

Music definitely runs in the family.
MUSIC・1 DAY AGO
iHeartRadio

Slash is gearing up to release his new album '4.'
MUSIC・3 DAYS AGO
arcamax.com

Megan, 35 - who has Noah, nine, Bodhi, seven, and Journey, five, with her ex-husband Brian Austin Green - loved the proposal and "thought it was beautiful and perfect". The insider told People: "She is excited to get married." The loved-up duo first started dating in May 2020 after meeting...
CELEBRITIES・4 DAYS AGO