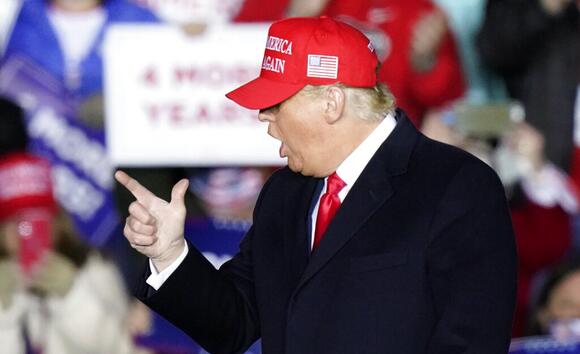 Capitol riot investigators have found evidence possibly linking the Trump White House to the Justice Department in efforts to overturn the results of the 2020 election.

A draft letter to Georgia officials urging them to consider an alternate slate of electors contained metadata, or data with information about a file, that suggests involvement by the White House, the chief counsel of the House committee investigating the Jan. 6 riot revealed last month. This pronouncement was made during a Nov. 5 deposition after former Justice Department official Jeffrey Clark walked out and the chief counsel went on to list the matters that the panel wanted to broach, according to the transcript .

"I also wanted to ask him about metadata in that draft letter that indicates some involvement with the White House Communications Agency and the drafting or preparation of that letter," the chief counsel said.

MSNBC host Rachel Maddow, who on Friday reported there being White House metadata in that draft document, said she heard from a source "close to the committee that indeed metadata from that letter suggests that the letter was authored by the White House Communications Agency."

John Dean, a former White House counsel who testified against President Richard Nixon in 1973 during the Watergate scandal, said the email likely did not originate from the White House Communications Agency, but the evidence suggests Trump was aware of it.

"The White House Communication Agency (WHCA) is a military operation at the White House staffed and run by the Defense Department to keep the Commander-In-Chief always plugged in and informed. They would not originate this letter rather communicate it per instructions of WH staff!" Dean said in a tweet thread.

"This information tells me Clark’s letter was known and circulated within the White House, on WHAC’s secure system, and likely sent to others outside the White House who logged on to the secure system," he added. "This makes it more likely Trump was aware of it. Clearly it got out of DOJ!"

Clark, one of the former Trump administration officials subpoenaed by the committee, was found to have drawn up a proposal to intervene in the Georgia certification process, including emailing top Justice Department brass a draft letter, and raised doubts about the election results in other states. Former President Donald Trump is said to have favored replacing Jeffrey Rosen , his acting attorney general, with Clark in order to carry out a more aggressive strategy to challenge President Joe Biden's victory in November.

However, the former president opted not to dismiss Rosen after he was told during an early January meeting in the Oval Office that top Justice Department officials and White House counsel Pat Cipollone would resign if he went through with the plan, according to a 394-page report released in October by the Senate Judiciary Committee, which was based on the testimony of former officials and documents.

The House Jan. 6 committee moved Wednesday to recommend that Congress hold Clark in contempt for defying the subpoena by refusing to answer questions during a deposition. The panel said it was going to give Clark another opportunity to appear over the weekend after he sent a letter suggesting he intended to invoke the Fifth Amendment, but a spokesman for the committee said Friday that Clark informed it of a "medical condition that [precluded] his participation" in the meeting and that he had "provided ample evidence of his claim." The committee set a new date of Dec. 16 for the deposition.

John Eastman, a conservative lawyer who wrote legal memos outlining ways then-Vice President Mike Pence could try to overturn the 2020 election, also asserted his Fifth Amendment right against self-incrimination, according to a Dec. 1 letter from his lawyer to the Jan. 6 committee.

Georgia Secretary of State Brad Raffensperger revealed last week that he is one of the state officials who have spoken to the House committee about a Jan. 2 call between himself and Trump in which the former president encouraged him to "find" votes sufficient to sway the Georgia election in his favor.

The phone call, which was recorded and leaked to the media, is under review by a Fulton County grand jury to determine if the state should bring criminal charges against Trump.

Daniel Goldman, the former lead counsel for House Democrats in the first Trump impeachment trial who is now running for New York attorney general , commended the Jan. 6 committee staff for uncovering the metadata "connecting Clark’s efforts to overturn the GA results with [the White House], which was trying to do the same through Raffensperger."

He added in a tweet, "All part of Fulton Cty DA [investigation]. If DOJ won’t do it, then we have to rely on state and local prosecutors."

The only ones trying to steal the vote from the people are the Trumplican Party members and the twice Impeached 1 term former president. Vote tampering at the highest level.

Of course trump was aware of it. It was his idea and he was scrambling to hang onto executive protection. Plus he wanted to be king of the world and his ego couldn't handle losing. No doubt he threatened and fired anyone that wouldn't go along with his attack on our country. When they get to the bottom of all this, it will be trump front and center.

As Democrats in Washington turn their attention to election overhaul legislation, a top Republican contender for an open ruby-red Georgia House seat says that election issues are still a top concern for Republicans, too.
WASHINGTON, DC・1 HOUR AGO
WashingtonExaminer

US party identification shifts toward Republicans in latest Gallup poll

As the United States deals with a slew of crises ranging from inflation to the COVID-19 pandemic, public political opinion appears to have shifted in favor of Republicans.
PRESIDENTIAL ELECTION・25 MINUTES AGO
The Independent

Republican senators rallied to the defence of Sen Mike Rounds this week after he was attacked by former President Donald Trump.Mr Rounds sparked a feud with the former president when he went on ABC’s This Week on Sunday and reiterated that he did not believe conspiracy theories supported by Mr Trump and his allies about the 2020 election, namely the assertion that Mr Trump had in fact won the election."We simply did not win the election, as Republicans, for the presidency,” Mr Rounds said on Sunday.“[I]f we simply look back and tell our people don't vote because there's cheating going...
PRESIDENTIAL ELECTION・23 HOURS AGO

The MyPillow founder made the remarks at Trump's Arizona rally, where many speakers touted conspiracy theories about the 2020 election.
PRESIDENTIAL ELECTION・23 HOURS AGO
Newsweek

Mitt Romney made the comment Sunday after Lindsey Graham said he'd only back McConnell if he mends his relationship with Trump.
PRESIDENTIAL ELECTION・23 HOURS AGO
Newsweek

Former president Trump said that President Biden had made Dr. Anthony Fauci "like a king" during comments to supporters.
ARIZONA STATE・1 DAY AGO

"I think anyone with common sense would be reluctant to go talk to this committee," the GOP congressman said.
CONGRESS & COURTS・20 HOURS AGO
Fox News

One QAnon follower said: "When he came out…I instantly felt it was not him. I kept trying to convince myself that it was."
ARIZONA STATE・7 HOURS AGO
mediaite.com

A Republican state representative from Arizona was in no hurry Wednesday to answer questions about why he signed an inauthentic electoral certificate declaring former President Donald Trump won the state in 2020. As was widely reported Wednesday, state-level Republicans in several contested states sent similar certificates to the National Archives...
ARIZONA STATE・3 DAYS AGO

The Florida governor has managed to cut down Trump's overwhelming lead in recent polls amid reports the pair no longer consider each other allies.
PRESIDENTIAL ELECTION・5 HOURS AGO
Salon

This article originally appeared on AlterNet. MSNBC's Rachel Maddow has been offering in-depth analysis of MAGA Republicans' efforts to undermine the Electoral College results in states that now-President Joe Biden won in 2020, including sending out fake electors. And in a recent broadcast, the liberal MSNBC host reported that those fake electors tried to pull off that deception in "at least" five different states.
PRESIDENTIAL ELECTION・3 DAYS AGO

A CNN White House reporter accused Republicans of a nationwide effort to make it "easier to steal elections" in an "analysis" piece published Friday. Stephen Collinson bemoaned President Biden's tough week after he was dealt twin blows from the legislative and judicial branches: moderate Democratic Sens. Joe Manchin of West Virginia and Kyrsten Sinema of Arizona, maintained their opposition to eliminating the filibuster to advance Biden-backed election legislation, and the Supreme Court struck down his mandate on large businesses to vaccinate or test employees.
PRESIDENTIAL ELECTION・2 DAYS AGO
Reuters

WASHINGTON, Jan 17 (Reuters) - The U.S. midterm elections are some 10 months away, but President Joe Biden's administration and allies already foresee a possible scenario in which Republicans take the House of Representatives, the Senate, or both, and launch a series of investigations and attempts to impeach the president.
PRESIDENTIAL ELECTION・5 HOURS AGO
WashingtonExaminer