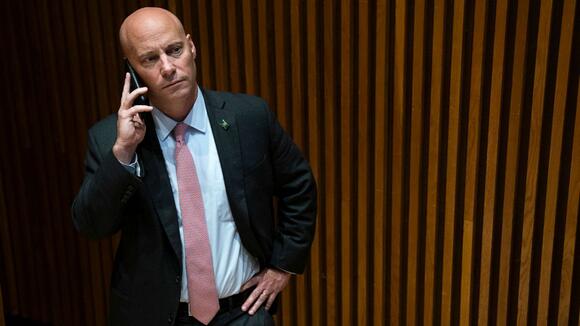 Former Vice President Mike Pence's chief of staff has been subpoenaed by the congressional committee investigating the Jan. 6 attack on the U.S. Capitol, a source with knowledge of the matter tells ABC News.

Marc Short has given no indication that he will rebuff the committee's subpoena, but he has maintained that he will respect any invocation of executive privilege by former President Donald Trump, according to the source.

The source also said that Short's legal team has been in consultation with attorneys for Trump regarding documents of his that they might include in their claims.

Short is being represented by attorney Emmet Flood, a source said. Flood, who was previously special White House counsel under Trump, was described in a profile as a "fierce defender of executive privilege."

Trump's attorneys have been appealing a decision on the former president's privilege claims in federal court.

During oral arguments last week, members of Trump's legal team argued that the records requested by Congress were overbearing and lacked legislative purpose, and that they should be "designated as privileged and or otherwise restricted under the Presidential Records Act." No indication was made regarding when to expect a ruling on the matter.

News of the Short subpoena was first reported by CNN.

Congress has the right to hold hearings to gather information.They can refer to the DOJ to bring charges against them, if the evidence is sufficient.

The House select committee investigating the Jan 6 attack on Congress is seeking an interview with former Attorney General William Barr following the shocking revelation first reported by Politico that Donald Trump’s allies drafted an executive order directing the seizure of voting machines.Rep Bennie Thompson, the committee’s chairman, made the announcement on Sunday during an interview with ABC News. He added that lawmakers on the panel have spoken with Mr Barr previously in the course of their investigation, but were now interested in learning more about the draft executive order created some time in December of 2020.Appearing on This...
PRESIDENTIAL ELECTION・1 HOUR AGO
Business Insider

The Supreme Court Wednesday denied former President Donald Trump's request for a court order to prevent the disclosure of privileged records to the House Select Committee to Investigate the January 6th Attack on the Capitol. The Court noted that the U.S. Court of Appeals for the D.C. Circuit, which upheld...
CONGRESS & COURTS・4 DAYS AGO

The Fox News anchor has again claimed that the House Speaker turned down National Guard assistance before the riot at the U.S. Capitol.
CONGRESS & COURTS・11 DAYS AGO
Los Angeles Times

The House select committee investigating last year’s Capitol riot has subpoenaed two aides to Donald Trump Jr. and a former White House staffer who helped draft the speech former President Donald Trump gave at his “Stop the Steal” rally shortly before the violence broke out.​​. The...
POTUS・11 DAYS AGO

Jan. 12 (UPI) -- The House select committee investigating the Jan. 6 riots at the Capitol on Wednesday issued a subpoena to House Republican leader Kevin McCarthy. In its letter to McCarthy, R-Calif., the committee said that he was reportedly in communication with White House chief of staff Mark Meadows and former President Donald Trump ahead of the events of Jan. 6. The panel said he allegedly advised them about plans to halt the certification of the 2020 presidential election results.
CONGRESS & COURTS・11 DAYS AGO
The Independent

Former Republican House Speaker Newt Gingrich has predicted that members of the House Select Committee investigating the Capitol riot on 6 January last year could be jailed if the GOP takes control of Congress after the midterms. “You’re going to have a Republican majority in the House and a Republican majority in the Senate,” Mr Gingrich told Fox News on Sunday. “All these people who have been so tough and so mean and so nasty are going to be delivered subpoenas for every document, every conversation, every tweet, every email because I think it’s clear that these are people...
CONGRESS & COURTS・8 HOURS AGO
Newsweek

Pence has previously said that the decision in Roe v. Wade should be thrown on "the ash heap of history."
PRESIDENTIAL ELECTION・1 DAY AGO
Fox 13 Now - Salt Lake City

The ex-president's niece said her 40-year-old cousin could have "damning" information about the Capitol riot.
POTUS・6 HOURS AGO
Newsweek

"This is what it looks like when the rule of law unravels," the Wyoming Republican wrote on Sunday.
CONGRESS & COURTS・8 HOURS AGO
Business Insider

"They have not had to cast one bloody vote — which shows us where they're at," Sanders said of the legislative inaction. "We have got to change that."
VERMONT STATE・9 HOURS AGO
Newsweek

On Sunday the GOP lawmaker was asked about a proposed plan shared in the Trump White House to seize voting machines after the 2020 election.
CONGRESS & COURTS・7 HOURS AGO

Experts say the House committee investigating the Capitol riot has hundreds of pages of documents and more potential testimonies that can prove to be explosive.
POTUS・2 DAYS AGO
The Guardian

The two Democratic senators chose to wreck American democracy, simply to feed their sense of their own importance
CONGRESS & COURTS・23 HOURS AGO
Newsweek

The Constitution, kids in schools, safe streets and a secure border were among the things the House Republican leader said the GOP stood for.
PRESIDENTIAL ELECTION・12 HOURS AGO