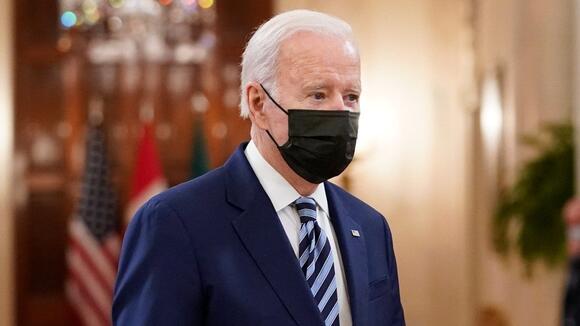 President Biden held a call with the leaders of France, the U.K., Italy and Germany on Monday afternoon about Russia’s buildup of troops on its border with Ukraine, the White House said, an engagement that came on the evening of a crucial Biden call with Russian President Vladimir Putin .

"They called on Russia to de-escalate tensions and agreed that diplomacy, especially through the Normandy Format, is the only way forward to resolve the conflict in Donbas through the implementation of the Minsk Agreements,” the readout continued.

The call was meant to demonstrate solidarity between the U.S. and its European allies ahead of the one with Putin, which is expected to focus on the escalating Russian aggression near Ukraine.

Russia has amassed tens of thousands of troops on the border with its western neighbor, raising concerns in the U.S. and Europe about the possibility of a Russian military invasion. Current and former officials have compared Russia’s recent behavior to its activity in the lead up to the 2014 invasion of Ukraine’s Crimean Peninsula, which Moscow continues to occupy to this day despite international condemnation.

A senior administration official told reporters earlier Monday that Biden would speak with the European leaders “to coordinate his message and ensure that he goes into that conversation with President Putin with allied unity and strong transatlantic solidarity on the way forward.”

During the call, the leaders “underscored their support for Ukraine’s sovereignty and territorial integrity” and agreed to stay in touch “on a coordinated and comprehensive approach,” according to the White House readout.

The readout did not specify if the leaders discussed potential economic sanctions and other measures they could impose on Russia in the event of an invasion of Ukraine, though such measures have been a topic of conversation in recent days.

Biden administration officials have made clear that the U.S. and Europe are weighing economic sanctions on Russia as an option to respond should Putin decide to invade Ukraine.

“We believe that we have a path forward that would involve substantial economic countermeasures by both the Europeans and the United States that would impose significant and severe economic harm on the Russian economy should they choose to proceed,” the senior administration official said.

Biden is expected to hold a call with Ukrainian President Volodymyr Zelensky in the days after his call with Putin. Secretary of State Antony Blinken phoned Zelensky on Monday to discuss Russia’s behavior.

Ex-leader Poroshenko to go to Ukraine to face charges

Former Ukrainian President Petro Poroshenko says he is returning to Ukraine to fight treason charges — even though he views them as politically motivated — because he believes that fighting them is part of his defense of national unity.Poroshenko spoke Sunday at a news conference in Warsaw hours before he is to fly Monday from the Polish capital to Kyiv Ukraine, where he is to face the allegations in court.A prosecutor has alleged that Poroshenko, one of Ukraine's richest businessmen, was involved in the sale of large amounts of coal that helped finance Russian-backed separatists in eastern Ukraine...
POLITICS・1 DAY AGO
USA TODAY

To be sure, as a general principle we need to stand firm when dealing with Putin. But this crisis needs to be ramped down.
POLITICS・13 HOURS AGO
AFP

Ukraine said Sunday it had evidence that Russia was behind a massive cyberattack that knocked out key government websites this past week, as Microsoft warned the hack could be far worse than first thought. Tensions are at an all-time high between Ukraine and Russia, which Kyiv accuses of having massed troops on its border ahead of a possible invasion. On Friday, Washington also accused Russia of sending saboteurs trained in explosives to stage an incident that could be the pretext to invade its pro-Western neighbour. "All the evidence points to Russia being behind the cyberattack," the Ukrainian digital transformation ministry said in a statement.
PUBLIC SAFETY・1 DAY AGO

Putin "has to understand that the consequences are going to be significant," the Republican senator said Sunday.
FOREIGN POLICY・1 DAY AGO
TheConversationAU

Russia and the West are at a stalemate over Ukraine. Is Putin's endgame now war?

The flurry of diplomatic activity last week over Russia’s latest military buildup near Ukraine ended, as expected, with no breakthrough agreement. Russian President Vladimir Putin called it a “dead end”. Washington was hoping the talks between Russia and the United States and its NATO allies, which took place in three different European cities, would de-escalate the crisis along Ukraine’s border and lead to a diplomatic solution. But the stalemate shows how differently the Putin and Biden administrations interpret the security situation on Europe’s periphery. For the US, Russia’s determination to act as a spoiler stems from a petulant unhappiness with the post-Soviet...
POLITICS・1 DAY AGO
The Independent

Ukraine has accused Russia of mounting a “hybrid war” after a massive cyberattack left much of the country without heat, light and access to money.As around 100,000 Russian troops gather near the border, the country has been “building up its forces” online too, the Ukrainian government said. Officials in Kiev say they have evidence Moscow was behind the attack, which knocked out key government websites on Friday.Tensions are high on the Ukrainian border, where the threat of a Russian invasion looms. Diplomatic talks to resolve the standoff appear to have stalled, and the US has suggested Moscow is preparing for...
POLITICS・1 DAY AGO

Jan. 17 (UPI) -- A bipartisan group of seven U.S. senators met with Ukrainian President Volodymyr Zelensky in Kyiv Monday in a show of support for the country against possible Russian military aggression. The group discussed Ukraine's security situation and steps to be taken to de-escalate tensions with Russia as...
FOREIGN POLICY・4 MINUTES AGO
WGN News

Russia demands US, NATO response next week on Ukraine

MOSCOW (AP) — Russia on Friday strongly reaffirmed its demand that NATO doesn’t expand eastward despite the rejection of that by the military alliance amid a Russian troop buildup near Ukraine. Foreign Minister Sergey Lavrov warned that Moscow wouldn’t wait indefinitely for the Western response, saying he expects the U.S. and NATO to provide a […]
MILITARY・2 DAYS AGO
POLITICO

Opinion | The Unorthodox Weapon We Need to Defend Democracy

As autocrats' tactics get more creative, protecting the nation isn't just the job of governments anymore.
EUROPE・1 DAY AGO
The Independent

A Russian invasion of Ukraine is “inevitable and imminent”, a Conservative MP claimed last night.It comes after suggestions from US officials that Russia had prepositioned a group of operatives to conduct a false-flag operation to justify invading Ukraine.White House Press Secretary Jen Psaki said that the Kremlin was laying the groundwork for an attack through a social media disinformation campaign framing Kiev as the aggressor.Speaking on Friday, Tobias Ellwood, chairman of the Commons defence committee, said: “I am afraid an invasion by Russian forces is inevitable and imminent and we have allowed this to happen.“We had the opportunity to...
POLITICS・2 DAYS AGO

The cyberattack on multiple Ukrainian government agencies happened under the looming threat that Russia could invade Ukraine.
POLITICS・1 DAY AGO
FOX59

Headed to disaster? US, Russia harden stances in talks

The failure of last week’s high-stakes diplomatic meetings to resolve escalating tensions over Ukraine has put Russia, the United States and its European allies in uncharted post-Cold War territory. It is posing significant challenges for the main players to avoid an outright and potentially disastrous confrontation. Unlike previous disagreements that have arisen since the collapse of the Soviet Union, the current Ukraine crisis carries real risks of debilitating economic warfare and military conflict that are exacerbated by the dangers of miscalculation and overreaction, particularly in Europe. The refusal thus far by each side to climb down from what the other regards as unrealistic and maximalist demands has left the prospects for diplomacy in limbo.
POLITICS・1 DAY AGO
Newsweek

With U.S. and Russia Stalemate at Ukraine Talks, Moment of Truth Nears

A State Department spokesperson told Newsweek that "the coming days" will prove if diplomacy can succeed, while Russia's envoy warned his country was on the "edge of the precipice."
FOREIGN POLICY・2 DAYS AGO
The Independent

Russian incursion into Ukraine would ‘violate freedom and sovereignty’ – Wallace

An invasion by Russia into Ukraine would violate the “most basic freedoms and sovereignty”, the Defence Secretary has said following a visit to Scandinavia.Issuing a second warning in a week to Moscow Ben Wallace said there would be “consequences” of any Russian aggression towards Ukraine.On Monday, he fired a shot across the bows, telling an event in London that Britain would “stand up to bullies”, no matter how far away the conflict.Tensions on the Ukrainian border continue to be fraught, with the US suggesting Moscow is preparing for a “false-flag operation” in order to spark an incursion into neighbouring...
POLITICS・2 DAYS AGO
Newsweek

The Russian embassy in Washington, D.C., accused the White House of making "unceasing accusations" about Moscow.
POLITICS・2 DAYS AGO
WEKU

Secretary of State Antony Blinken says the U.S. is planning "things that we have not done in the past" if Russia invades Ukraine. His comments follow days of diplomatic talks and a deadlock on resolving the crisis brewing along the Ukraine-Russia border. Russia has 100,000 troops lined up next to...
MILITARY・4 DAYS AGO
Washington Times

Russian and NATO officials held a “serious and direct exchange” over soaring tensions in Ukraine and eastern Europe, NATO Secretary-General Jens Stoltenberg said Wednesday, asserting that the Western military alliance still has deep concerns about the Kremlin’s policy but hopes for more talks to ease the crisis.
POLITICS・5 DAYS AGO
Boston 25 News WFXT

BRUSSELS — (AP) — NATO Secretary-General Jens Stoltenberg said Wednesday that the military organization and Russia have agreed to try to schedule more meetings, despite tensions over Moscow’s military buildup near Ukraine. Speaking after chairing a meeting of the NATO-Russia Council, Stoltenberg said both parties had “expressed...
POLITICS・5 DAYS AGO