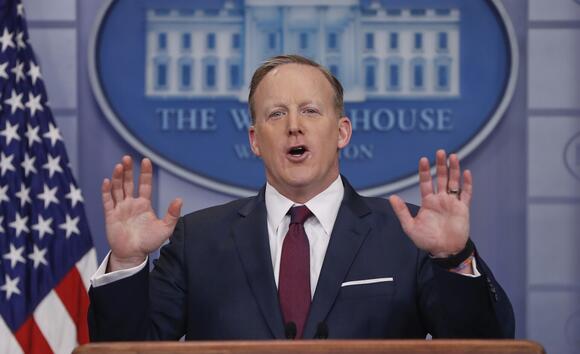 A court has rejected the request of two former Trump administration officials to be reinstated on the U.S. Naval Academy board.

U.S. District Judge Dabney Friedrich denied former White House press secretary Sean Spicer and former Office of Management and Budget Director Russell Vought’s motion to be returned to the board while they sue President Joe Biden for removing them from their positions, Bloomberg News reported on Monday.

The former Trump administration officials filed the suit in September after the Biden administration pushed out more than a dozen people serving on the military service academy advisory boards.

Friedrich rejected Spicer and Vought’s claim that their removal would “silence dissenting views” on the board in an order filed on Saturday.

The pair of former officials “give no indication that their views on the governance of the Naval Academy actually differ from the other board members,” the judge said. “Nor do they explain how it would serve the public interest to present advice to the president — the primary function of the board — that the president does not intend to consider.”

The suit was filed on their behalf by America First Legal, which said at the time in a statement, “This illegal partisan power-grab is just another example of the Biden administration breaking longstanding bipartisan norms and traditions.”

Defense Secretary Lloyd Austin announced the suspension of all military academy oversight boards last February while they conducted a review following a flurry of last-second appointments by the previous administration.

Good they failed the country with their lack of professionalism to include showing a complete lack of integrity for the positions that they were no longer qualified for. Excellent choice to deny they the privilege and honor of leading and guiding our young leaders of this country.

Former Press Sec fired by Trump and later a failed Dancing With Stars participant sues to stay on the Navy Board advising President Biden about Navy matters. Knows little about press relations, can’t dance and doesn’t know the difference between a row boat and a submarine. Can’t make this stuff up.

President Joe Biden’s top aides spent the first day of his second year in office wending through hours of cleanup that showed no sign of disappearing.
PRESIDENTIAL ELECTION・3 HOURS AGO
WashingtonExaminer

Congressional Republicans had a wealth of topics to criticize as they commemorated the one-year anniversary of President Joe Biden’s inauguration with a festival of events, with energy bubbling as they eye taking back the House in 2022.
PRESIDENTIAL ELECTION・4 HOURS AGO
WashingtonExaminer

‘MINOR INCURSION’ — MAJOR GAFFE: In his marathon news conference yesterday, President Joe Biden started out sounding tough on Vladimir Putin should the Russian president order his troops into Ukraine. “He’s never seen sanctions like the ones I promised will be imposed if he moves,” Biden said.
PRESIDENTIAL ELECTION・14 HOURS AGO
The Guardian

Stephanie Grisham gave more significant details than expected about what Trump was doing before 6 January, sources say
POTUS・20 HOURS AGO

It was about a month ago when Donald Trump appeared on Fox News and was asked about the investigation into the Jan. 6 attacks. "Honestly, I have nothing to hide," the former president said. "I wasn't involved in that." It was a curious response for a variety of reasons, not...
POTUS・13 HOURS AGO
bloomberglaw.com

A federal district court Wednesday dismissed a lawsuit the former Health and Human Services civil rights director brought against President Joe Biden after he was asked to resign from an advisory committee he had been appointed to days before Biden took office. Roger Severino, who served as director of the...
U.S. POLITICS・22 HOURS AGO
Fox News

Former State Department adviser Amanda Milius joined Fox Nation's "Tucker Carlson Today" on Friday to discuss the proverbial culture shock of moving from Los Angeles, to grassroots politics in Middle America, campaigning for Donald Trump, and then to Washington, D.C. where she was an official in the White House. Milius,...
POTUS・6 DAYS AGO
Business Insider

Rep. Jamie Raskin suggested Sunday that Donald Trump could be blocked from returning to the Oval Office if the Democratic-controlled Jan. 6 committee rules that the former president was complicit in “organizing” or “participating” in last year’s attack on the Capitol. The Maryland Democrat, a...
POTUS・11 DAYS AGO
Newsweek

The White House expands availability of COVID test, N95 masks ahead of Biden's press conference to mark one year in office. Follow Newsweek for the latest.
CONGRESS & COURTS・1 DAY AGO
CBS News

A panel of historians is releasing its third collection of essays analyzing and assessing the accomplishments and failures of a presidential administration. But for the first time, a former president, Donald Trump, spoke to the historians to offer his own take on his time in office. Correspondent Rita Braver talks with Princeton University's Julian Zelizer, who assembled the panel, and with the academics who unpack history's first judgment of the 45th president.
POTUS・11 DAYS AGO
Newsweek

The order paves the way for 700 documents related to the events of January 6 to be transferred to the committee.
CONGRESS & COURTS・1 DAY AGO

Manchin Says His Decisions Based on Rural People He Represents, Not Washington Democrats

Jan. 6 committee could get some Trump White House documents as soon as Wednesday

The disclosures could come even as ex-President Donald Trump pursues a Supreme Court challenge to block the release to the select House committee.
POTUS・2 DAYS AGO
POLITICO

It carries big consequences for other challenges to the panel's work. Here's the latest: A federal judge rejected an effort by Donald Trump spokesperson Taylor Budowich to force the Jan. 6 select committee to return his financial records, which were subpoenaed from J.P. Morgan. The panel obtained the records last...
CONGRESS & COURTS・9 HOURS AGO
Newsweek

Jason Greenblatt discussed the ongoing Iran nuclear talks during a conversation with journalist Barak Ravid on Monday's episode of "The Diplomat."
PRESIDENTIAL ELECTION・1 DAY AGO
WashingtonExaminer

Subscribe today to the Washington Examiner magazine and get Washington Briefing: politics and policy stories that will keep you up to date with what's going on in Washington. SUBSCRIBE NOW: Just $1.00 an issue!
ENERGY INDUSTRY・9 HOURS AGO