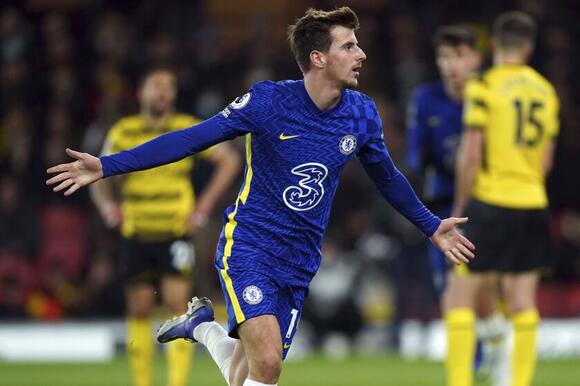 One of the five non-league teams in the draw for the third round of the FA Cup has been handed one of the most exciting matches possible — a trip to European champion Chelsea.

Chesterfield, which leads the fifth-tier National League, got the reward of a trip to Stamford Bridge after beating fourth-tier Salford City in the second round.

Chelsea reached the final last season only to lose to Leicester, which launches its defense of the title with a home match against Watford.

That is one of three all-English Premier League matchups, with Manchester United-Aston Villa and West Ham-Leeds being the others.

Romelu Lukaku is right, he is not an easy fit in Chelsea’s system

It is tempting to wonder what might have been if, at the start of the second half at the Etihad on Saturday, the only shot on target that Chelsea managed all afternoon had been placed around the onrushing Ederson rather than easily within his reach. Maybe Thomas Tuchel would have taken more positives from the performance, maybe Manchester City would even have lost, maybe there would still have been a sliver of intrigue for us to savour in the final four months of this Premier League title race.Maybe Romelu Lukaku would have taken the first step on his long road...
PREMIER LEAGUE・21 HOURS AGO
The Independent

Manchester City have gone 13 points clear in the Premier League as they defeated Chelsea 1-0 thanks to a superb Kevin De Bruyne strike.It was a game regarded as one Chelsea had to win as City are unlikely to drop many points for the rest of the season. But the Blues weren’t clinical enough in the final third.In the first half, Raheem Sterling was causing a lot of issues but Chelsea’s defence, particularly through Antonio Rudiger and Thiago Silva, held strong.Chelsea had dangerous counter attack but the final pass didn’t come off for the visitors angering manager Thomas Tuchel. The...
PREMIER LEAGUE・2 DAYS AGO
The Independent

Brighton host Chelsea in the evening kick-off at the Amex Stadium with the second Premier League meeting between the sides in just three weeks. Danny Welbeck cancelled out Romelu Lukaku’s opener in the reverse fixture at Stamford Bridge before new year.And Graham Potter’s side arrive in good form, though they could only draw 1-1 with Crystal Palace despite dominating large spells of the match.This game is being played tonight due to the European champions’ commitment to play in the Club World Cup, shifting from the original 8 February date, a move that Thomas Tuchel is struggling to come to terms...
PREMIER LEAGUE・3 HOURS AGO

Rafael Benitez’s departure from Everton has thrown open another managerial vacancy and some interesting names are already being lined up to replace the 61-year-old Spaniard.Here, the PA news agency takes a look at some of the potential contenders to replace him.Wayne RooneyEngland and Manchester United’s leading goalscorer has endured a baptism of fire in his first managerial job at Derby and the temptation to return to his boyhood club could prove too strong to turn down should the call come. Everton have prised managers away from Premier League rivals in the past – Ronald Koeman from Southampton and Marco Silva...
PREMIER LEAGUE・1 DAY AGO
The Independent

Aston Villa rescued a 2-2 draw in the Premier League against Manchester United after mistakes led to both of the visitors goals.It was an awful start from Villa. Bruno Fernandes took a soft free kick and took his time to strike. When he did, it was a deft touch and goalkeeper Emiliano Martínez looked to have caught it. But he dropped it through his legs to put United ahead.Mason Greenwood had a few chances and Villa threw all they had at United in the closing minutes of the first half but heading into the break the visitors were still 1-0...
PREMIER LEAGUE・2 DAYS AGO

Cristiano Ronaldo and Lionel Messi were both included in the men’s world XI team of the year alongside Erling Haaland and Robert Lewandowski – winner of the men’s individual prize – in a front four.Fifpro’s 2021 team crowbarred in the attacking quartet, with a back three of Manchester City’s Ruben Dias alongside Bayern Munich’s David Alaba and Euro 2020 winner Leonardo Bonucci. Dias’s City teammate Kevin De Bruyne was named in midfield alongside Jorginho and N’Golo Kante. Meanwhile Barcelona players were surprisingly omitted from the women’s team, despite Barca and Spain midfielder Alexia Putellas winning the women’s player of the...
FIFA・15 HOURS AGO
The Independent

Manchester United denied Birmingham City two wins on the bounce as they claimed a dominant 5-0 win in the Women’s Super League on Saturday. Birmingham came into the match off the back of a huge upset over league leaders Arsenal, but United made sure they didn’t have the same fate and came out firing.Marc Skinner’s side were 3-0 up after 20 minutes thanks to goals from captain Katie Zelem and Leah Galton, before the afternoon went from bad to worse for the visitors as Emily Ramsey hit in an own goal and Alessia Russo added a fifth with a strike...
SOCCER・2 DAYS AGO
The Independent

Wolves survived a late Southampton fightback to maintain their European push.Raul Jimenez’s penalty, Conor Coady’s first Molineux goal for six years and Adama Traore’s injury-time effort earned a 3-1 win.James Ward-Prowse’s stunning free-kick pulled a goal back for the Saints and Romain Perraud hit the bar just before Traore sealed victory for the hosts.Bruno Lage’s side were not at their vibrant best but it was enough to squeeze past the Saints to sit eighth in the Premier League.They are just two points adrift of the top six while mid-table Southampton slipped to a seventh defeat of the season.There was little...
PREMIER LEAGUE・2 DAYS AGO
The Guardian

The two Manchester clubs are on the rise while Arsenal have made signings in an attempt to stop the rot
SPORTS・22 HOURS AGO
goal.com

WATCH: De Bruyne finish gives Man City deserving lead (US only) "Yesterday before training, he still had problems with his hip flexor," the Red Devils boss has said. "I had another conversation with him and we then decided that it doesn't make sense to take him on the journey here. Hopefully he can play on Wednesday.
PREMIER LEAGUE・2 DAYS AGO
San Diego Union-Tribune